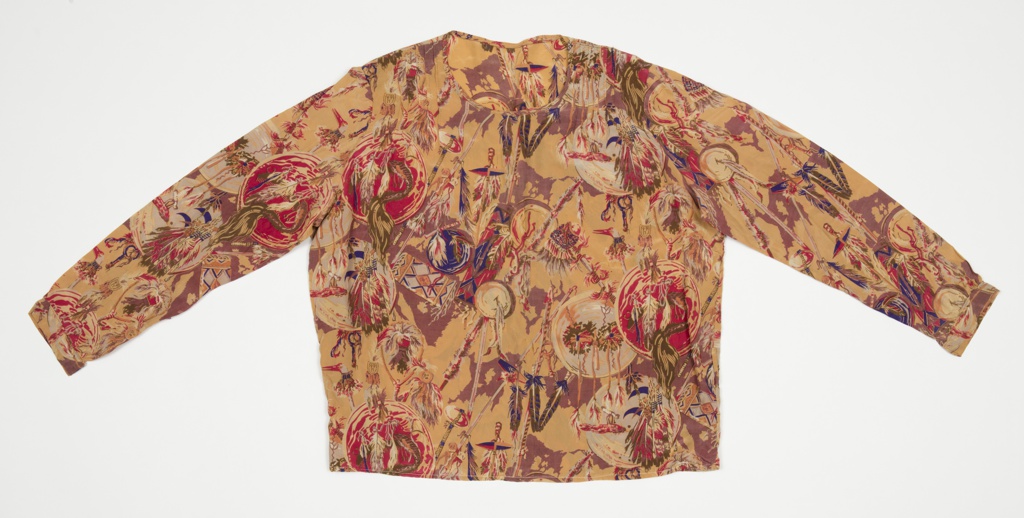 Inspired by the popularity of their printed series of fabrics entitled American National Parks (Spring 1927) and Wonder Caves of America (Fall 1927), H.R. Mallinson & Company maintained their creative momentum by returning to other American themes first visited during the “Designed in America” campaigns of the World War I period. Motivation also came from external sources, in the form of competitors such as Stehli Silks, who invited contemporary artists, illustrators and photographers to design their printed silks.

In 1928, Mallinson launched one of its most successful lines, producing a group of fifteen printed textiles entitled the American Indian series. The company had a number of New York fashion shows in late 1927 to promote and build excitement about their latest line of fabrics. The largest event was held at Mallinson’s own showroom on November 29, 1927. Art Director A.J. Heinke (1884–1956) even borrowed ceramics and textiles from the Brooklyn Museum to decorate the massive opening that was attended by at least two thousand people. The New York Times wrote that more than twenty-five different designs were shown, including parasols, handbags and shoes made by participating manufacturers. Fourteen of the fifteen designs came from independent designer Walter Mitschke (American, b. Germany, 1886–1972) and represented the following indigenous American groups: Blackfoot, Sioux, Crow, Zuni, Shoshone, Pomo, Navajo, Iroquois, Comanche, Ute, Arapaho, Cheyenne, Pueblo, and Cherokee. Leon Bakst (Russian, 1866–1924) produced the fifteenth design for the Hopi textile just before his death in 1924. The series would prove to be one of the most profitable lines ever produced by Mallinson & Company.

← Friends of Dorothy
The Tortoise in the Hair →