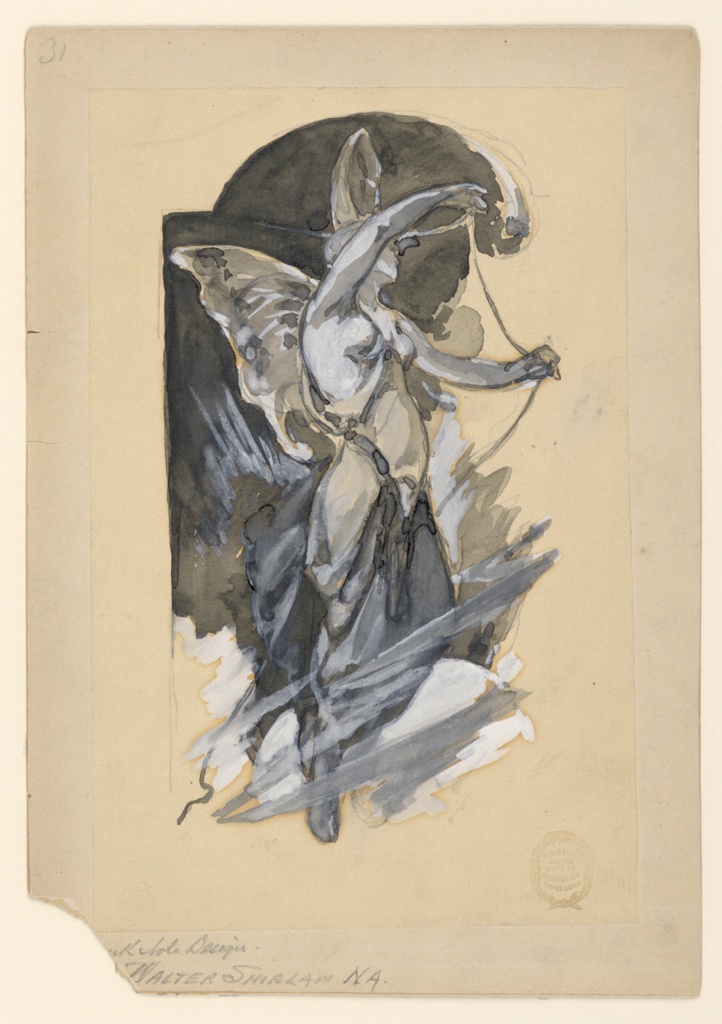 With her butterfly wings, this artfully draped female figure would seem more at home decorating a theater than ornamenting U.S. currency.  Yet the designer, Walter Shirlaw, clearly labeled his drawing “Bank Note Design.”

Shirlaw left school at the age of twelve and apprenticed himself to a bank note engraving company, believing that it would help him to become a great artist.  For the first twenty years of his career, he worked primarily as a bank note designer as he took evening art classes and saved money to study in Europe.[1]  After several years in Munich, he returned to New York and had an illustrious career, becoming the first President of the Society of American Artists.

In the 1890s, Shirlaw was one of three artists—along with Edwin Blashfield and Will H. Low—approached by the U.S. government to submit designs for a new series of bank notes.  As the New York Times reported, the series was intended to inject “a little more art and less of old-fashioned stiffness into the designs for paper money.”[2]

Shirlaw’s design for the 1896 five dollar silver certificate is still considered by many to be the most beautiful bank note in U.S. history. The design features an allegorical figure of America, holding aloft an incandescent globe radiating light. Fame sits below, blowing a horn.  An eagle rests at her feet, and the dome of the Capitol Building glints in the background.  On the right, Peace appears with a dove. On the left, Strength appears as a charioteer driving three fiery horses as lightning flashes above.

Cooper Hewitt’s collection has nearly two dozen bank note designs by Shirlaw, including sketches of the central figure above. Some studies may have been related to an unused design for a ten dollar silver certificate featuring an allegorical figure of Agriculture, often depicted holding a sickle like the figure on the left here.[3]  Other unused designs represented the newly expanded American Navy, with ships in the background and a figure with a hammer signifying a shipbuilder.[4]

The most beautiful bank note in U.S. history was short-lived, as the 1896 certificates were taken out of circulation within three years.  Some critics took issue with the subject matter.  An article in the Detroit Free Press quipped that the designs were “so splendidly allegorical that they had to be diagrammed again and again. Nobody understood them.”[5] In addition, the central figure’s bare breast offended groups like the Society for the Suppression of Vice, prompting the Bureau of Printing and Engraving to promise that ladies would be covered on future currency. Likely, the notes were taken out of wider circulation because of a rise in counterfeit bills.  The certificates became dingy and blurred after a little handling, making it difficult to distinguish the spurious and the genuine.

Still, imagine if your wallet was filled with fairy-like figures with butterfly wings.

← A Panther with Leopard Spots
Art in Metal: The Modernist Jewelry of Greenwich Village’s Art Smith →