A Functional Prototype for a Touchscreen Tablet Computer 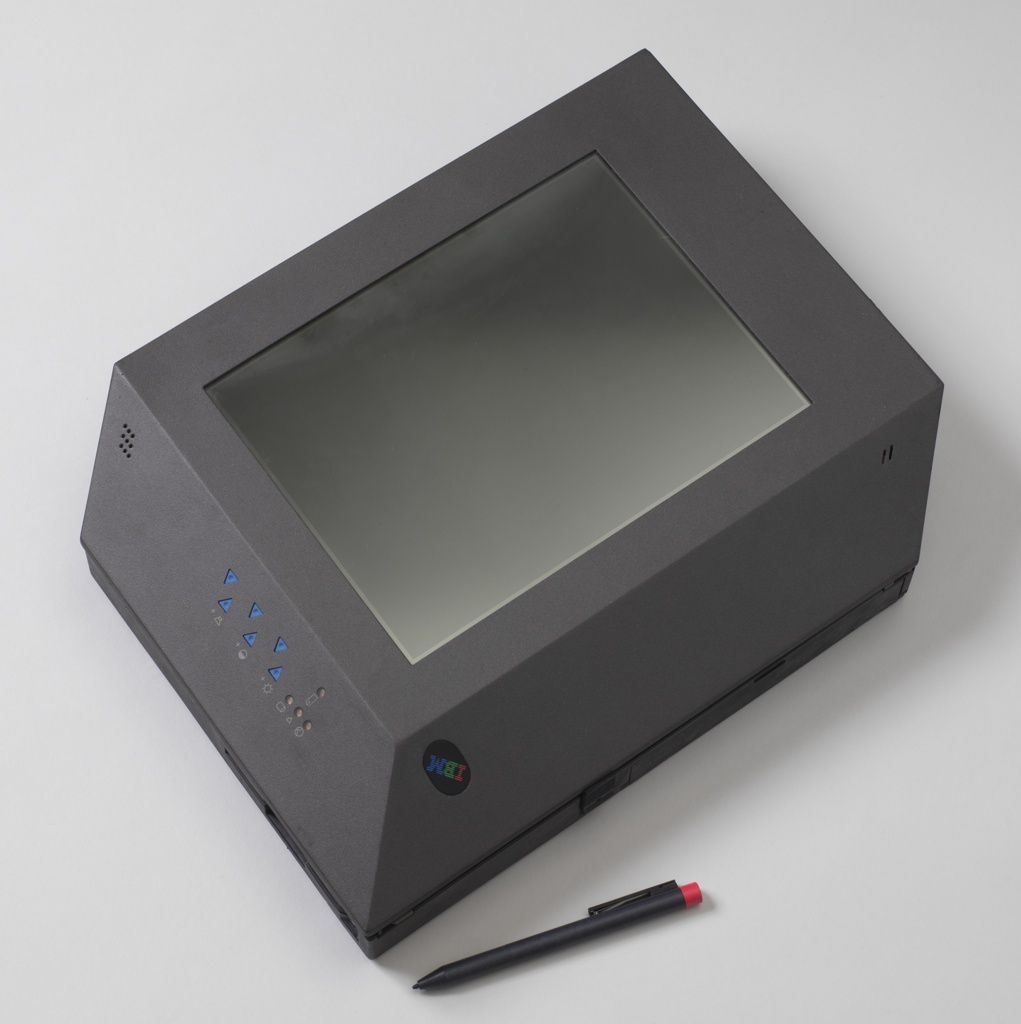 Dating from the early 1990s, the Leapfrog is a functional personal computer prototype which consists of a trapezoidal touch screen tablet which mounts into a base station. Today, the Leapfrog stands out as an example of human-computer interaction incredibly ahead of its time: a full-color, fully-portable Windows 3.1 tablet computer. This case study provides a guide for the acquisition, preservation, and display of rare functional prototypes.

According to former IBM employees, the Leapfrog was never intended to be released as a consumer product. More of a “concept computer,” it was commissioned through IBM’s Strategic Design Department under the auspices of a somewhat speculative design program entitled “Vision 95.” This program, which began in the late 1980s, was intended as an opportunity for a small team of fifteen designers and engineers to produce theoretical objects that looked to the future, particularly the needs of society in 1995. These prototypes were intended to reinvent IBM’s image, and to generate interest from investors for actual commercial products that would be more competitive in the market.[1] The Leapfrog was a perfect marriage of Richard Sapper’s edgy industrial design with the Vision 95 team’s incredible engineering ability. It was featured in Cooper Hewitt’s 1994 exhibition “Good Offices and Beyond: The Evolution of the Workplace,” and later acquired. MoMA too featured the Leapfrog in its 1995 exhibition “Mutant Materials in Contemporary Design”, and acquired one for their collection.

Condition Assessment: Cooper Hewitt acquired the Leapfrog tablet, its corresponding base station, and several accessories: among them a stylus, an extra trackpoint (the iconic red dot in the middle of the keyboard used to point the cursor, in place of a mouse or trackpad), and an infrared peripheral device. However, no documentation was collected that would describe the components or how they worked together, like a user manual or production drawings. For an object as unique as the Leapfrog, decades later we are left wondering about various aspects of its design and electronics. In an ideal world, when this object was collected, an interview would have been conducted with a designer and engineer in order to capture these aspects for future collections care professionals. This has now become standard practice at most museums, including Cooper Hewitt, for complex digital objects we acquire today.

To recover some of this missing information, Sam Lucente, the lead designer for the ThinkPad project, was contacted and interviewed. As with any consumer electronic, the Leapfrog presents an external housing and internal machinery– and each has unique condition concerns. The subtly matte texture of the plastic exterior is the result of a special “Soft Touch” coating. Decades after its production, it suffers from a malady common to aged plastics: stickiness. The Leapfrog is now stored in silicone release Mylar which prevents it sticking to anything, but it requires particularly careful handling as its surface is inherently very fragile.

Complete condition assessments for electronic objects include disassembly to facilitate visual inspection of the electronic (interior) componentry, and looking for signs of age or failure indicated by bulging, leaking, or corrosion. At first, we were unable to successfully disassemble the Leapfrog– it seemed clear that there was at least one hidden screw that we could not locate. We reached out to colleagues who could help us investigate using X-Radiography. Our colleagues at the Metropolitan Museum of Art’s Department of Objects Conservation generously helped us radiograph the tablet component to see inside. The radiograph helped us locate a screw hidden under the battery compartment, and allowed us to examine the internals (image). Unfortunately, we were unable to disk image the SCSI drive, despite repeated attempts.

What have we learned?: In the course of our examination, we also compared the Cooper Hewitt example to MoMA’s, finding that the same evidence of its prototype nature (tape and handwriting) were visible in both machines.

Going forward: displaying an interface: While visitors could learn more about the Leapfrog by interacting with it, given its status as a rare prototype we cannot allow such intensive use and the risk of damage. Instead, we propose using emulation, a strategy that would allow a visitor to interact with a software program running on simulated hardware, which circumvents using the collections object itself. Despite its pioneering design, our research has shown that the Leapfrog did not run any sort of proprietary or original software or operating system—it ran Windows 3.1 and Pen Computing 1.0, both of which are relatively common and widely available pieces of software, even in 2019, decades after the Leapfrog’s creation. Small data was able to prepare a pre-configured emulator setup by placing the Windows 3.1 and Windows for Pen Computing 1.0 setup files in a directory, mounting that directory in dosbox, installing and running Windows 3.1 from DOS, then installing and running Windows for Pen Computing from Windows.

One of the most significant features of the interface design for the Leapfrog was the shape of the trapezoidal tablet. It might be desirable to house the emulator in a custom trapezoidal case like the Leapfrog’s to make a convincing interface experience in the gallery. To this end, we worked with NYU’s LaGuardia Lab to 3D scan the unique trapezoidal tablet case. Now, the museum can fabricate a replica case for use in a gallery display.

This case study has highlighted questions inherent to the display of consumer electronics in a design museum. Preservation and display practices such as disk imaging and emulation allow us to consider not only the functionality of the collections object and its software, but the complete viewer experience of interacting with emulations in a gallery, and experiencing a physical object.