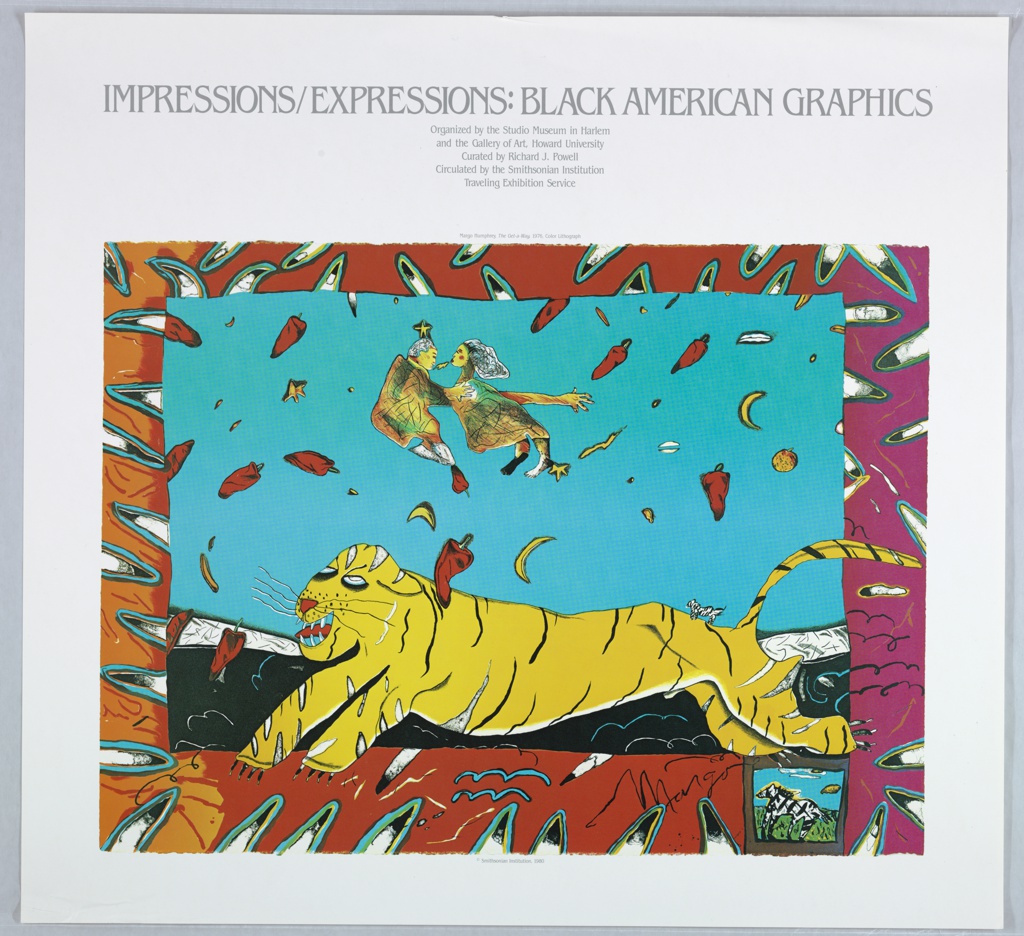 In October of 1979, an exhibition entitled Impressions/Expressions: Black American Graphics opened at the Studio Museum in Harlem. The show, associated with the second annual “Survival of the Black Artist” Fine Arts Festival, later traveled to Howard University—alma mater of the exhibition’s 26 year-old curator, Richard J. Powell.[1] The first survey of its kind, Impressions/Expressions put on view 107 prints by more than 50 artists.[2] This poster in the collection of Cooper Hewitt, features a lithograph titled The Get-a-way by Margo Humphrey, an artist included in the exhibition. A lifelong artist, Humphrey received her first award for printmaking in high school, and currently teaches at the University of Maryland.[3] Like many of her prints, The Get-a-way features an expressive use of color and freedom of form. Powell, describing a series of Humphrey’s monotypes included in the exhibition, wrote that the artist “blends griot with image-maker, creating a world of female/male reveries and realities.”[4] Humphrey’s work was shown alongside that of other contemporary printmakers creating art directly involved with life experiences, including Margaret Burroughs, Elizabeth Catlett, and Calvin Reid. Historical context was provided by the inclusion of select 19th century examples, together with prints made by WPA artists of the 1930s and 40s. In the introduction to the exhibition catalogue, Powell closes with the hope that the work and personal histories collected in Impressions/Expressions “will not only bring us into the world of Afro-American printmaking, but ultimately into an appreciation for the motivation to print, survive, and thrive.”[5]

The exhibition was organized by SITES (Smithsonian Institution Traveling Exhibition Service), which facilitates exhibitions at diverse cultural centers in the United States. Since its founding in 1952,[6] many SITES exhibitions have highlighted topics that engage the diversity of Smithsonian collections in order to address and reframe historic events and figures.[7] In a 1980 interview, Powell set Impressions/Expressions firmly within the legacy of SITES’s project when he explained that “prints say more about history than any other medium, and prints focus on personal concerns that paintings and sculpture get away from.”[8] One thought on “First Impressions/Expressions Count”

Oddly, I was just looking at a framed copy of the exact poster you put in your blog. i think it might be an original poster because it belonged to my sister, a children’s book editor, who collected artwork in the eighties. I was thinking of donating to a church rummage sale and thought to google the artist to get some information about her and the event. Thank you so much for your post! Can you tell me how I can have my poster appraised?