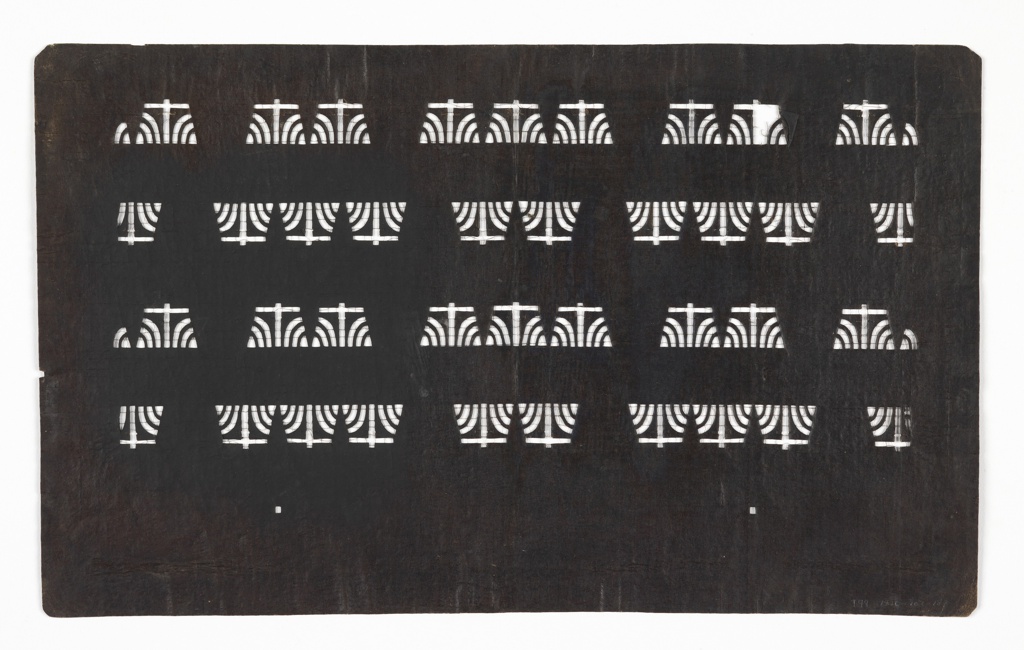 In the traditional Japanese craft of katagami, paper stencils are carved by master artisans for use in decorating textiles. Documented since at least the sixteenth century, the technique developed out of methods originally devised for embellishing leather armor. Some common katagami motifs record this history: the stylized iris pattern that appears on this stencil symbolizes bravery. The connection arises from the similarity of the words for iris (shobūgawa) and valor, or military victory (shobū).

To create katagami, pounded mulberry bark is treated with fermented persimmon juice, resulting in a paper that is strong, flexible, and waterproof. Once the paper has been cut, thin silk threads are sometimes added in order to reinforce the design. (They can be seen in the cut-away areas of the iris pattern above.)  Next, a highly-skilled dyer places the paper stencil over prepared fabric and applies a dye-resistant rice paste (or “resist”) through the stencil. This process is then repeated along the fabric’s length, creating an unbroken pattern. Later, when the fabric is dyed—usually with natural indigo—the areas protected by the resist remain untouched by the color. Finally, when the resist is washed away, the finished textile retains the stencil’s design.

Although stencil-dyed fabrics were first associated with samurai, during the course of the Edo period (1603–1868) they became popular among members of the merchant and peasant classes. The “martial iris” pattern that appears on the stencil above remained a popular design, and can be found on a fabric sample also in Cooper Hewitt’s collection (1956-54-14). Both stencil and textile—as well as many more examples of the craft—are now on view at the museum as part of Nature by Design: Katagami.

This object is currently on view in Nature By Design: Katagami.