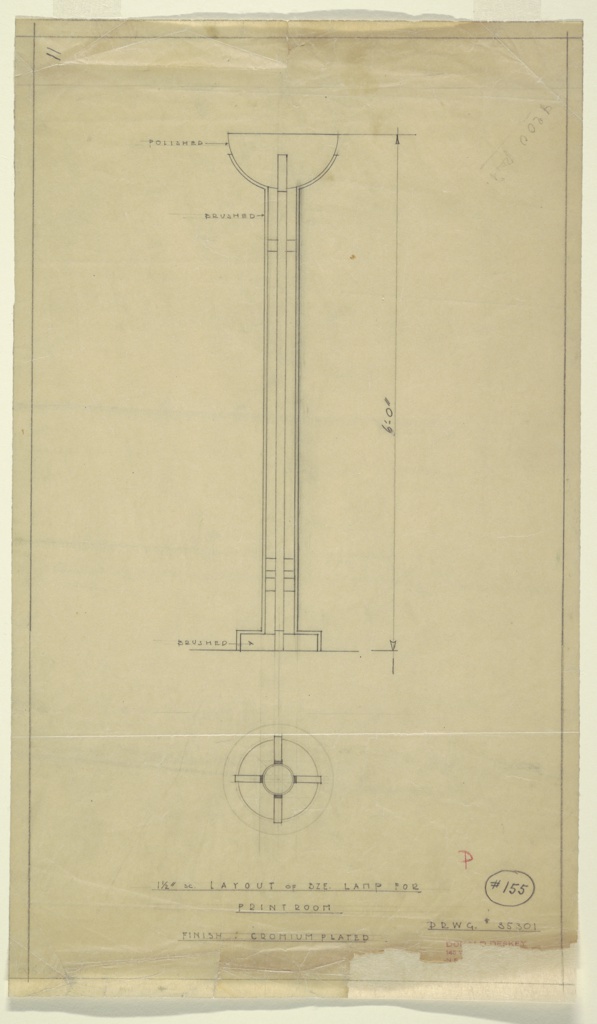 While this month we’ve been celebrating women designers, today’s post considers the role played by women patrons in the arts, architecture, and design.[1] Where modernism in America is concerned, one of the most influential actors in the early twentieth century was Abigail “Abby” Aldrich Rockefeller, whose husband was John D. Rockefeller, Junior.[2] Aldrich Rockefeller began seriously collecting in 1925, acquiring paintings, drawings, and sculpture by modern, contemporary, and folk artists both European and American. In 1929, she commissioned industrial and interior designer Donald Deskey, along with architect Duncan Candler, to transform the children’s seventh-floor playroom of the Rockefeller’s 54th Street residence into the “Topside Gallery” to which she could invite friends and fellow modern art enthusiasts. The print room in particularly exemplified Deskey’s modernism. He sheathed the walls in gray Bakelite and installed four pairs of grooved aluminum tracks around its perimeter, allowing artworks to be hung and rehung with ease and subtly invoking streamlines, the chief motif of American moderne design. He also designed the room’s furnishings, including the floor lamp above, here shown in situ. The chromium-plated bronze torchière featured a circular, brushed-finish foot from which rectangular metal straps extended, stabilized by a pair of rings below and a singular ring above, to hold a polished hemispherical shade. The upward-cast light would have played off the gray Bakelite and aluminum accents to create a shimmering yet neutral machine-age backdrop for Aldrich Rockefeller’s print collection. When Aldrich Rockefeller wrote in 1929, “what attracts me most about the art of our time is its vitality—the way it explores new possibilities and makes use of new materials,” she must have had Deskey’s Bakelite and aluminum galleries in mind as well as her growing assemblage of modernist masterworks.[3]

This case is just one example of the tremendous impact of women clients on the arts as well as the built environment. Thanks to recent scholarship in design history and patronage studies, this aspect of cultural history—and the women who propelled it—is finally enjoying the attention and recognition it deserves.