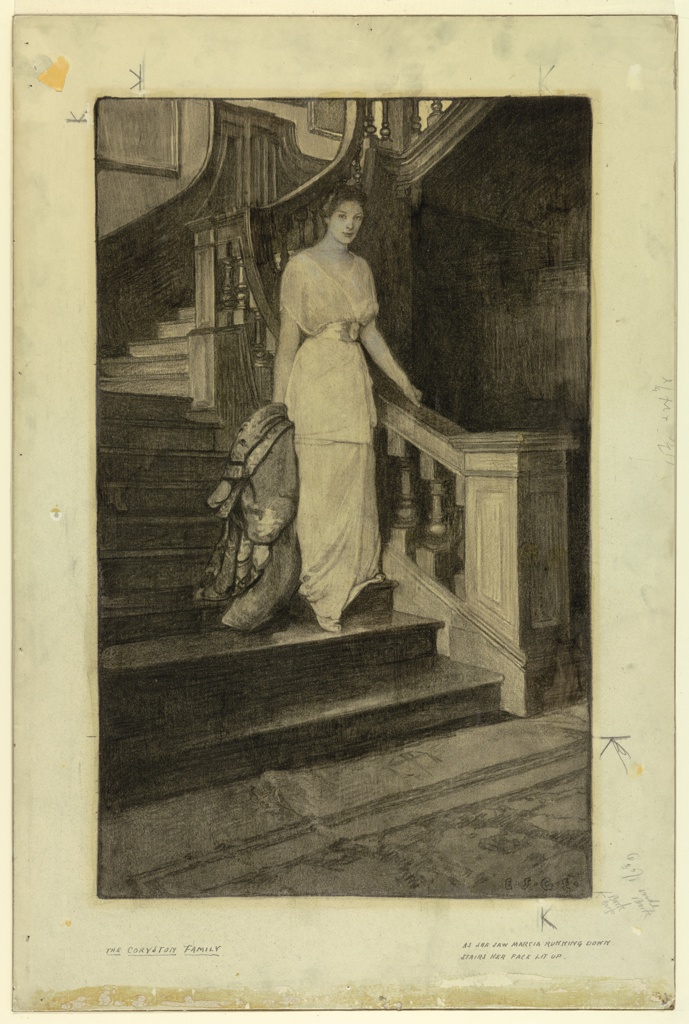 In a prolific career spanning six decades, Elizabeth Shippen Green (1871—1954) illustrated more than two dozen books and produced hundreds of illustrations for newspapers and magazines.  From 1901 until 1924, she worked under exclusive contract to Harper’s Magazine, where she was the first woman to join the elite staff of the art department.

Our collection includes two of Green’s illustrations for The Coryston Family by Mrs. Humphrey Ward, a 1913 novel about a British family trying to maintain their wealth and prestige after losing their patriarch. Here, the family’s strong-willed daughter is dressed in a shimmering white and pink gown to attend the opera at Covent Garden. The novel describes the theater as a space designed to “provide the most gorgeous setting possible for a world of women” in their finest attire.[1] Early in her career, Green supported herself as a fashion illustrator for publications including The Ladies’ Home Journal. Her later illustrations maintain a sartorial sensibility, showing a keen attention to detail in the costumes of dramatically posed figures.

Elizabeth Shippen Green learned the basics of illustration from her father, who had worked as an artist-correspondent for Harper’s Weekly during the Civil War. She studied at the Pennsylvania Academy of the Fine Arts and Drexel University, where she entered the classes of illustrator Howard Pyle.  Through Pyle, Green met fellow students Jessie Willcox Smith and Violet Oakley, who were to become her lifelong friends. The trio began sharing a studio, and in 1902 rented the old Red Rose Inn in Villanova.

Dubbed the “Red Rose Girls,” the group became national celebrities through their illustrations.  These remarkably talented, industrious women also drew attention from the press for their unconventional experiment in communal living.  Unmarried and childless, they successfully supported each other—as well as assorted elderly relatives and pets—as professional artists.  Another friend, Henrietta Cozens, assumed wifely responsibilities, managing the garden and household.  In 1905, the collective moved to a new home and studio dubbed “Cogslea,” an acronym of their last names.[2]

The band reluctantly broke up after fourteen years, in 1911, when Green married architect Huger Elliott.  She continued to work as an illustrator, moving to support Huger’s career as he held a series of prestigious titles including head of the Department of Education at the Metropolitan Museum of Art in New York.  While in New York, Elizabeth and Huger lived at 114 East 90th Street—a stone’s throw from the Cooper Hewitt’s present location.

One thought on “Descending A Staircase”

And the staircase looks like the one in the 1st floor lobby of the Cooper Hewitt.