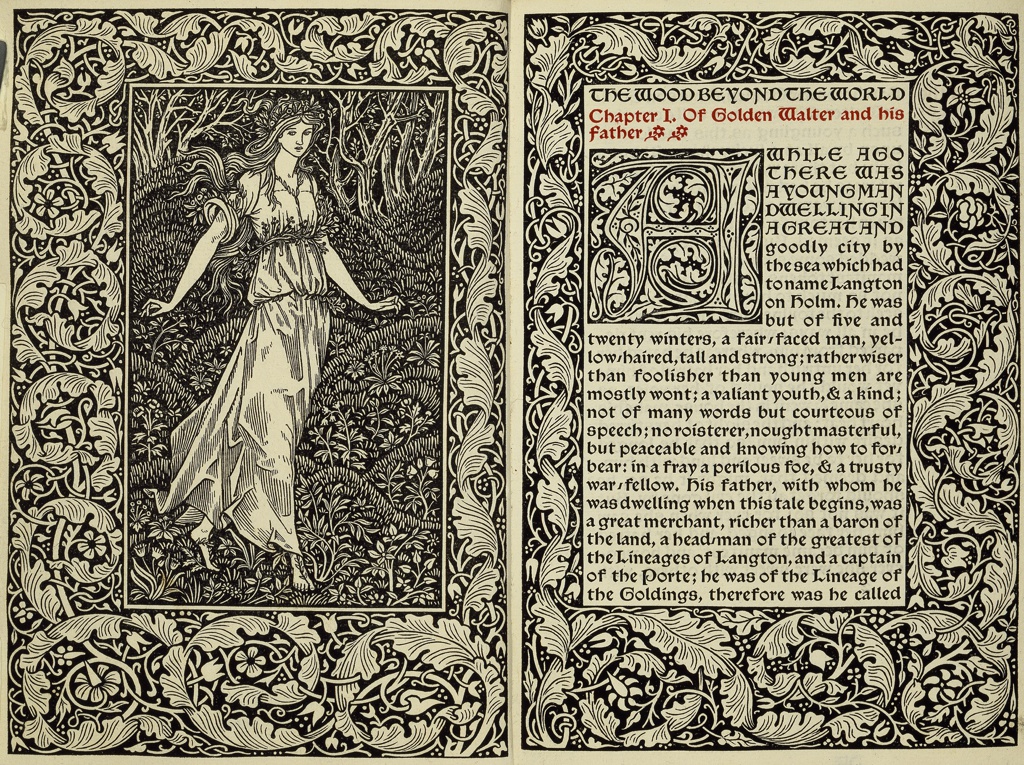 William Morris’s The Wood Beyond the World (1894) relates the adventures of Golden Walter, a man who seeks to escape his mundane life and sets out on a sea voyage, eventually gaining control of the kingdom of Stark-Wall and the love of a beautiful maiden. The book was published by the Kelmscott Press, a private press founded by Morris in 1891 as a reaction to the mass-produced, poorly-made printed books of his time. Seeking to reclaim the book from the commercial ethos which had increasingly dominated its development since the Renaissance, Morris returned to pre-Industrial production methods, using an Albion handpress and drawing inspiration from the thoughtful design and craftsmanship of early printed books.

Kelmscott books are known for their use of hand-sewn binding, handmade linen paper, detailed wood-engraved illustrations, elaborate initials and borders, and dense, black type. In the opening spread of The Wood Beyond the World, Morris’s intentionally archaic language is rendered in Chaucer, one of three Kelmscott fonts based on fifteenth-century typefaces.[1] The type is combined with an ornate “A” initial, borders filled with swirling natural forms, and an otherworldly illustration engraved by W.H. Hooper after a design by Edward Burne-Jones.

Burne-Jones depicts a willowy, unnaturally elongated female figure stepping forward in an undulating, lush meadow at the edge of a wood. The abundant growth within the illustration is replicated inside the “A” initial box on the opposite page and the bordering frames containing broad curling leaves, stems, and flowers. The pages are densely covered by interwoven, twisting forms that lead the eye in multiple directions. Although Morris articulated the need for books that would be “easy to read” and not “dazzle the eye,” moments of clarity alternate with dispersed attention as the curves and modulations of type echo and fruitlessly compete with the surrounding vegetal and floral structures.[2] The shifting, proliferating forms continually entice and mesmerize the reader with their allusions to sustained, pervasive growth, suggesting the book’s status as a dynamic, living object rather than a cheap commodity or meaningless materiality.

[2] William Morris, “A Note by William Morris on His Aims in Founding the Kelmscott Press,” in The Ideal Book: Essays and Lectures on the Arts of the Book, ed. William S. Peterson (Berkeley: University of California Press, 1982), 75.