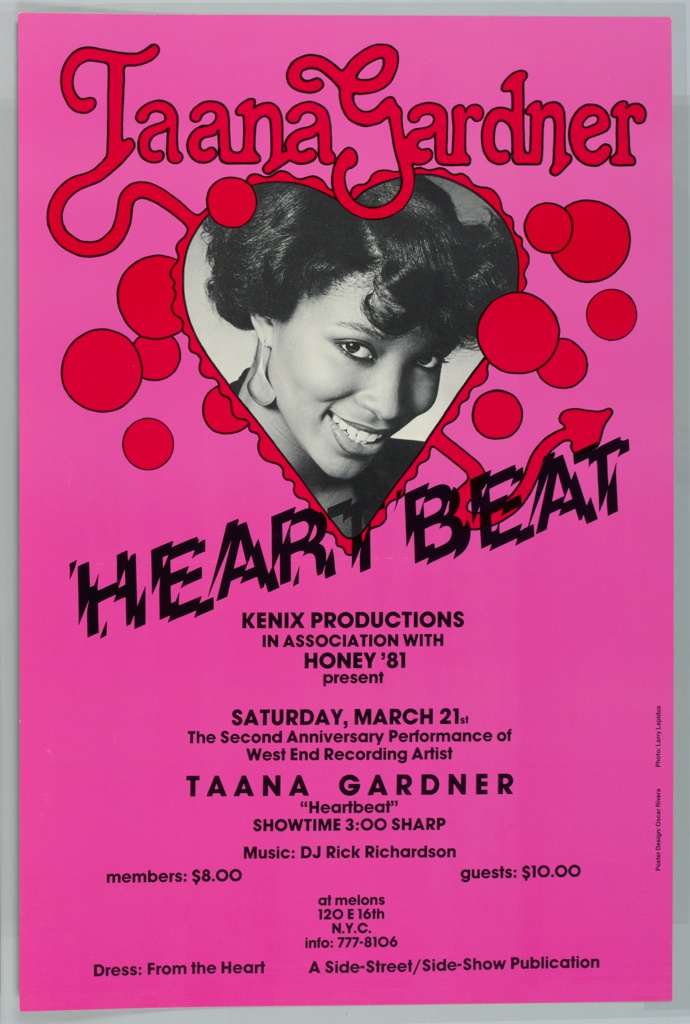 Although some may claim that disco died a messy media “death” in 1979, in the early ’80s, its “Heartbeat” could still be heard reverberating on radio airwaves and in dance clubs across the United States.[1]

Fame first found Taana Gardner in 1978, when she became an overnight sensation after recording the vocals for West End Records’ “Work That Body.” “When we were in the studio recording the song,” she later recalled, “we all knew it was something special, but we had no idea how special.”[2] Two years later, Gardner’s success with “Work That Body” was surpassed by the iconic release of “Heartbeat.” This poster in Cooper Hewitt’s collection announces a performance by Gardner, scheduled for Saturday March 14th, 1981—on that day, “Heartbeat” had spent the previous two weeks on the Billboard Top 100. The show was at Melons in New York City, a club born from the era of Paradise Garage, Studio 54, and the Loft.[3] Kenton Nix, of West End Records and Kenix Productions, had intended to promote the show only with the poster and by word of mouth in conjunction with Honey ’81, DJ Rick Richardson’s label. However, after hearing an announcement for the performance on the radio, he says he  was “floored,” knowing immediately that this “was going to be a problem.” Sure enough, on the night of the performance the club was swarmed, with at least 1,500 people waiting outside.[4]

Originally published in Billboard, May 9, 1981: photo taken by Oscar Rivera of Taana Gardner performing in New York City. Original text published with image reads: SEXY LADY–A sellout audience at Melons discotheque surges forward enthusiastically as Taana Gardner, West End Records artist, goes into a sensuous rendition of her popular hit,”Heartbreak.” [sic] Gardner was so popular with the crowd that she had to be spirited in and out of the club by way of the fire escape. According to club officials more than 1,500 people had to be turned away from the sellout concert.

Oscar Rivera’s poster design reflects Gardner’s alluring look on stage: her red chiffon dress designed by Patrick Kelly and the two 8-foot hearts with hydraulic pumps pulsating to the rhythm and beat of the record were the “talk of the town.”[5] Rivera’s poster also conveys Gardner’s stage-presence, described as “pure coquette” in Carola Dibbell’s June 1981 review of the show in Village Voice.  Quoting lyrics from Gardner’s chart-topping single, Dibbell writes that the singer, “needs us. We make her heart beat, we make her feel so weak.” During the show, Gardner asked her audience, “do you know that I love you?” Although question was posed “plaintively,” Dibbell writes that Gardner “couldn’t stop herself from smiling before the crowd broke out in moans.”[6]

Garner’s flirtatious on-stage persona is captured by the poster’s graphic design. Rivera lures the viewer in with Gardner’s sweet smile and upward-looking glance, framed by a heart and surrounded by feminine lettering. However, the shattered typeface used for the single’s capitalized title–“Heartbeat”—and the devil’s tail tucked behind suggest that things may not be quite as innocent as they appear. “As soon as the show ended, here comes the [FDNY].” Nix recalls, “They made us shut the doors but the party went on.”[7]