A Hard Shell to Crack 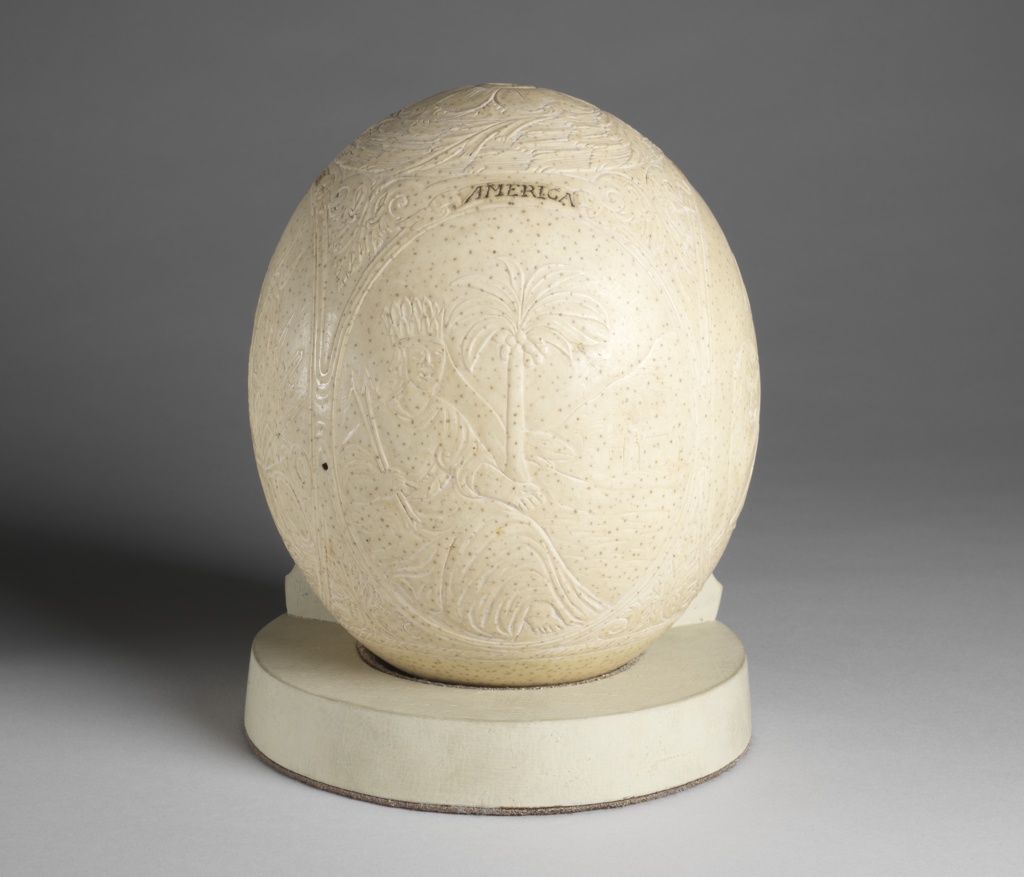 This ostrich egg is carved with allegorical figures representing the Four Continents—Europe, Asia, Africa, and America—a subject that originated in sixteenth-century drawings and prints and that later gained popularity in the decorative arts.[1] The collection of the late James Hazen Hyde, from which the ostrich egg comes, comprised hundreds of objects and prints depicting the Four Continents. Following Hyde’s death in 1959, his collection was divided among The Metropolitan Museum of Art, the Brooklyn Museum, and the Cooper Union Museum for the Arts of Decoration (now, Cooper Hewitt, Smithsonian Design Museum).

It is not known what inspired Hyde’s collecting of Four Continents material, except perhaps his renowned eccentricity. He is best known for throwing a multi-million-dollar Versailles-themed costume ball in 1905 that he charged to his company, resulting in investigations and efforts to remove him from office; he fled to France, where he lived for more than 30 years.

The use of ostrich eggs as a medium for carved decoration has a very deep history, perhaps going back more than 60,000 years. By about the sixth century BCE, carved ostrich eggs were buried in tombs throughout the Mediterranean as funerary offerings and were widely traded throughout the Middle East and the Mediterranean region.[2] Ostrich eggs were so treasured and sought after that an entire species, the Syrian Ostrich, was hunted to extinction.

The process involved in carving an ostrich egg shell is significant, most importantly starting with the acquisition of an egg from a large, powerful bird that can kill a human with a single kick. Once gathered, the eggs had to be drilled in order to empty them, and then dried thoroughly to allow for carving, a process that took many months, sometimes years.

The issue of allegorical—or what could also be called stereotypical—representations of the Four Continents, and especially of the Americas, is a theme of the exhibition Rebeca Méndez Selects, currently on view at Cooper Hewitt. In addition to this carved ostrich egg, the exhibition includes a print, a pastel drawing, and a porcelain figure, all from the Hyde collection and all depicting an allegorical figure of America. The imagery in representations of America frequently features an indigenous woman, often wearing a feather headdress, accompanied by flora and fauna of the New World—commonly crocodiles, palm trees, and parrots. In many groups, it is only America who is depicted partially nude, whereas Europe in particular is usually fully and elegantly clothed.

[2] University of Bristol. “Fantastic eggs and where to find them.” http://www.bristol.ac.uk/news/2017/april/decorated-ostrich-eggs.html (accessed November 1, 2018).