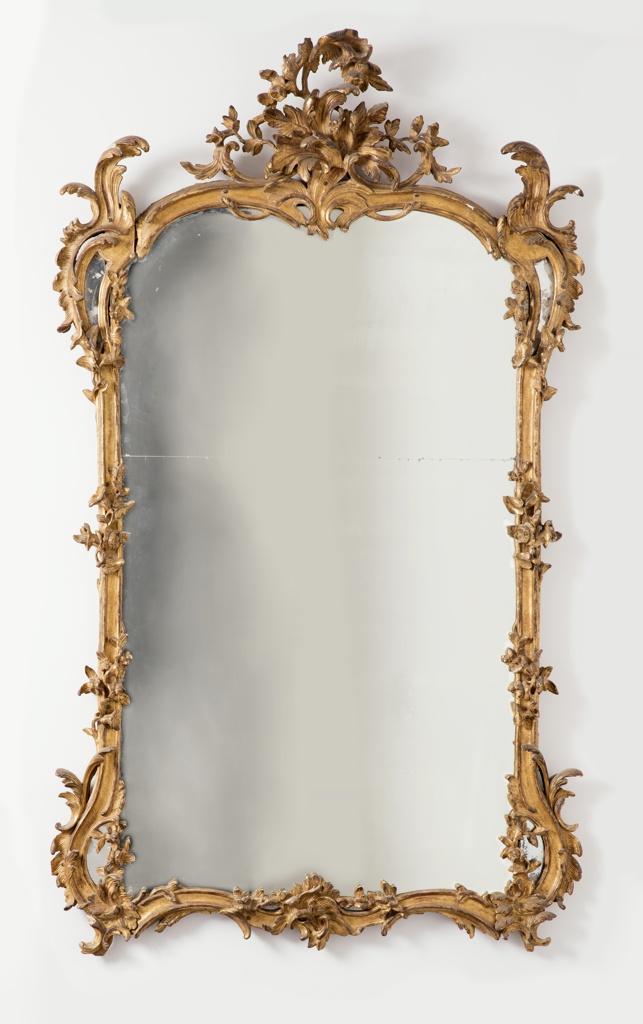 Mirrors, a commonplace fixture in the modern world, were not always the familiar accessory that they are today. Although some form of mirror has existed since ancient times, mirrors such as this 18th-century example used early industrial processes to create the fragile, metal-coated glass panes placed within a decorative frame. During the 18th century glass-making evolved to the point where thin panes of an even thickness could be manufactured, producing highly reflective mirrors with very little distortion. Glass panes on their own are poor reflectors, and therefore must be enhanced with a metallic coating to turn them into mirrors. The most successful coatings are silver, gold and chrome. A close look at this mirror reveals that it is composed of two pieces of plate glass. The technology needed to produce one large glass plate was not developed until the 19th century.

Glass mirrors were produced as early as the third century A.D. The next innovation in mirrors occurred in the 14th century, with the development of convex, or curved, blown glass mirrors. During the Renaissance, mirrors were made by using a mixture of tin and mercury as the metallic coating. Experiments through the subsequent decades yielded successful mirrors backed by silver amalgams and other metals. A process of placing a thin layer of silver nitrate on glass was developed in 1835. The invention of this technique allowed for the large scale manufacturing of mirrors, making them less costly and widely available to more people for the first time in history.

This 18th-century example is quite large at 6 feet tall and 43 inches wide. Often referred to as a pier mirror, it is a type that hung above console tables, often placed on walls in long or large rooms, and, being both decorative and reflective, served more than one function. A mirror was a source of illumination at a time before gas or electric lighting existed. Mirrors were commonly placed opposite large windows to reflect and intensify daylight light in a room. At night, the mirror reflected warm candlelight from hanging chandeliers or strategically placed candelabras. Small mirrors stood on their own, as part of dressing stands and vanity tables.

Mirrors have continued to evolve, found everywhere from the bedroom to the science lab, used for a multitude of purposes from a quick view of ourselves to reflectors in microscopes and cameras. This elaborately framed mirror gives us a glimpse of a time when such objects were a primary light source in elite interiors.

This object is currently on view in Tablescapes: Designs for Dining.

Susan Teichman is a design historian specializing in jewelry and synagogue architecture.