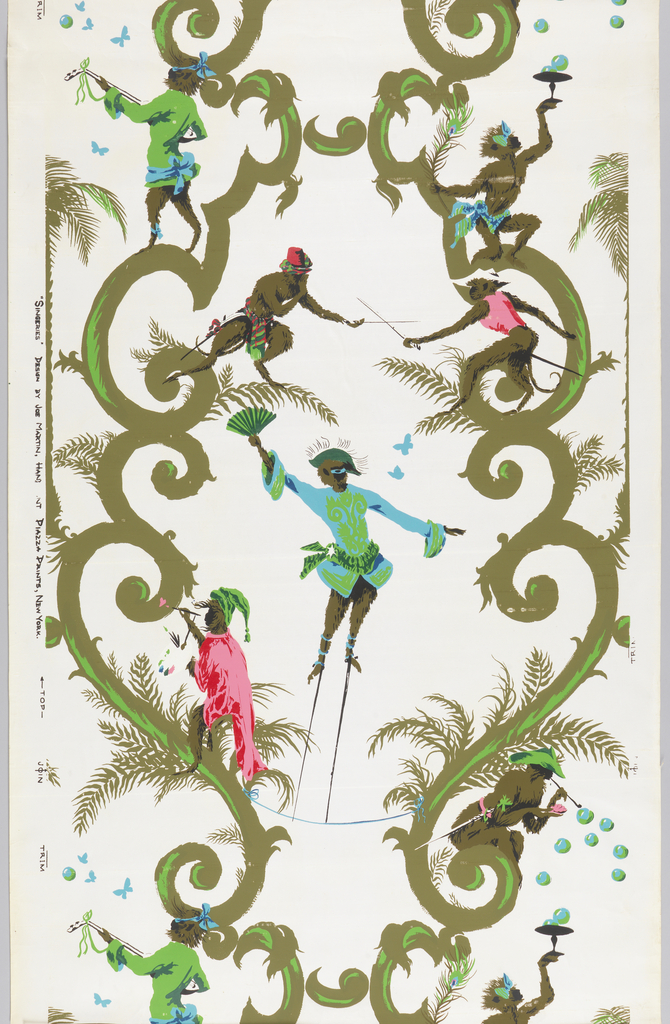 Scrolling framework twists and curls along the length of this wallpaper, Singeries, which was screen printed by Piazza Prints Inc. and is dated to 1965. Winding along these curling sections are delicate green fronds that look to be from a fern or palm tree as their leaves reach outwards. Between the framework and fronds is an unexpected sight, monkeys dressed in bright clothing, engaging in various activities. On the upper register of the repeat two of them are gazing up, the one playing the lute-like instrument looks on at some butterflies while the other seems to be catching bubbles. Just below the two is another pair who are engaged in a sword fight while the three on the lower half are all involved in their own pursuits; most notably, the one on the right side, in the pink frock, is painting.

Animals, and depictions of animals, have delighted humanity for millennia and their inclusion in wallpaper is without exception. From the very beginning of wallpaper history, animals have been included in its designs. They often turn up in varying circumstances such as hounds dashing during a hunt or bunnies hiding in the brush, to name a few instances. Playful, zany patterns staring animals, such as this, started turning up after the end of World War I. Light hearted images became popular during this period when many sought to purge the horrors of war from their minds. With the contagious good-humor of this paper’s design it seems possible to forget, at least momentarily, the problems pressing on one’s psyche.