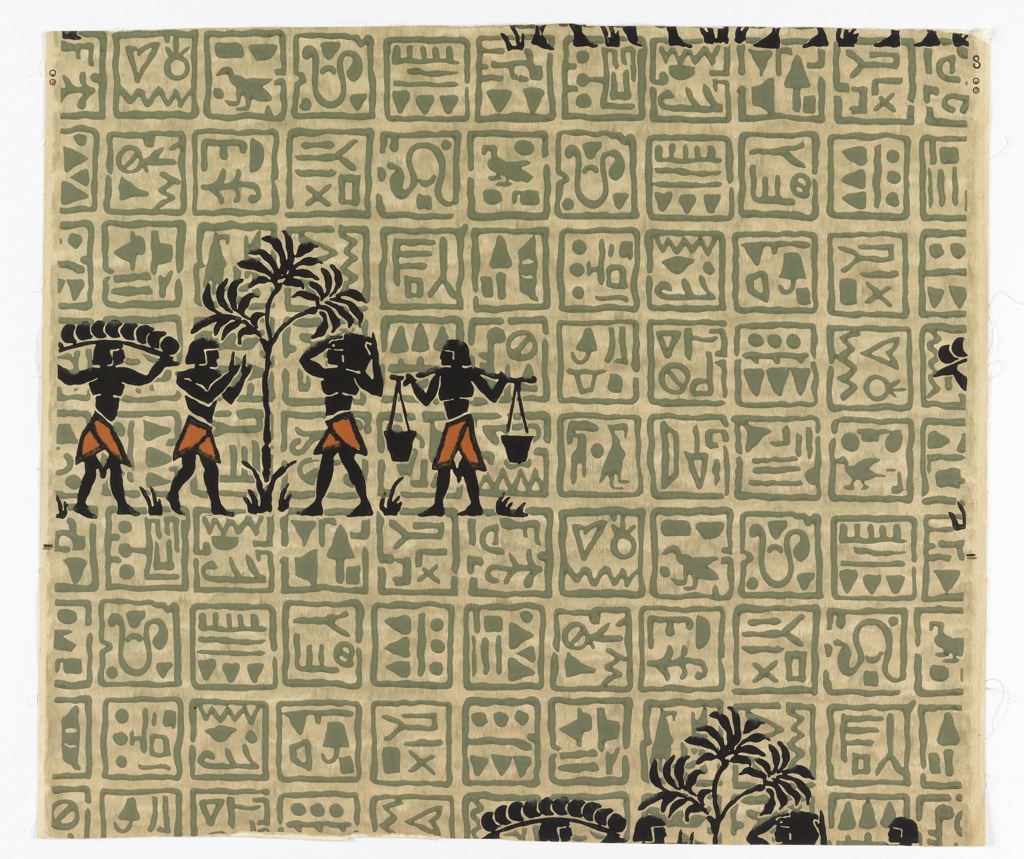 Posted by Gregory Herringshaw on October 12, 2018

When I’m scrolling through wallpaper images I frequently stop and wonder what movement or inspiration let to the fruition of that design. When I saw this Egyptian-style paper that the museum acquired in 1938 I couldn’t think of any events occurring at that time that may have inspired this. When I looked a little closer I saw the design was dated to mid-1920s which then made more sense. The pattern contains a repeating design of four Egyptian figures, with a small tree in the center, printed on a background of hieroglyph-like symbols, neatly arranged in a grid pattern. The figures are all shown wearing a shendyt, the kilt-like garment worn by men, and performing a chore, such as carrying water or transporting objects. The only color is provided by the orange shendyt which stands out against the otherwise drab gray on taupe color scheme.

Ancient Egypt has long fascinated the modern world, inspiring trends in the decorative arts and fashion. Josiah Wedgwood and G.B. Piranesi were both using Egyptian motifs in the mid-eighteenth century, while Napoleon’s Egyptian campaign beginning in 1798 spurred a revival in the Empire style. In the twentieth century, the new motion picture industry was quick to capture Egyptian themes, with Theda Bara’s Cleopatra in 1917, followed by The Ten Commandments in 1922, while some of the gilded movie palaces built in the 1920s were ornamented with Egyptian motifs.

The discovery of Tutankhamen’s tomb in 1922 again fanned the Egyptomania flame. This discovery made lasting impressions on the art deco movement, and inspired the decoration of such iconic landmarks as the Chrysler Building in New York City. Not to forget another string of movies with The Mummy, starring Boris Karloff, in 1932, followed by its four sequels, and another Cleopatra, also in 1932. May the beauty and simplicity of Egyptian antiquities keep inspiring designers and artists for many years to come.

Gregory Herringshaw is the Assistant Curator for Wallcoverings.

One thought on “Egyptomania”

A great style synopsis Mr. Herringshaw. Don’t ever stop keeping us informed & educated on historic wallpapers. You likely don’t receive enough credit & appreciation from your readers, yet hopefully it is otherwise with those above.