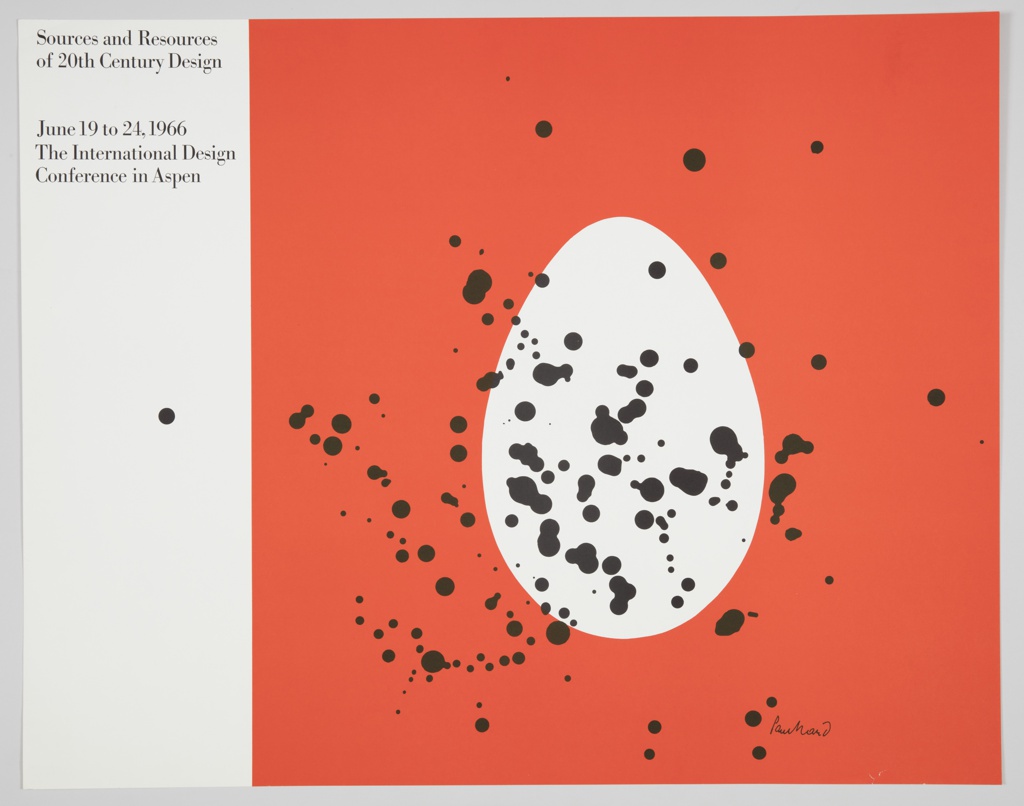 Produced by renowned American graphic designer Paul Rand, this poster announces the 1966 International Design Conference in Aspen (IDCA). Rand is known for his influential contributions to the advertising industry, including his logos for IBM, Westinghouse, ABC, and UPS. Starting in the 1930s, his bold designs, which incorporate collage elements, innovative typefaces, and asymmetrical layouts, revolutionized the industry. Influenced by European avant-garde art, Rand took stylistic inspiration from Constructivism, De Stijl, Cubism, and the Bauhaus.

As a highly admired, established figure in the field, Rand is a fitting choice to create a poster embodying the ethos of graphic design for this professional convening. Founded in 1951, the IDCA emphasized the interconnections between design, art, and industry, taking as a model the Bauhaus idea of the “total” work of art.[1] Given his interdisciplinary approach to design, Rand’s work is exemplary of the IDCA’s guiding philosophy. Not only did he source forms and methods from modern art, but his designs for book jackets, for example, ventured into the territory of what we would now call “artists’ books.”[2]

Asymmetrically bisected into two separate color fields, this poster features an egg at right, with uneven black splotches gravitating towards (or emanating from) it, and text at the top left. Reminiscent of earlier Rand posters featuring cracked-open eggs—often symbolizing new ideas and forward thinking—the yet-to-be-hatched egg here suggests IDCA’s potential to incubate creative thought.[3] The floating splotches recall the speckled eggs that certain bird species lay. Their haphazard arrangement, and the rebel dot venturing out, suggest a spirit of experimentation, or “coloring outside the lines.” True to his reputation, Rand devised a poster that reflects the essence of an abstract concept, through simple, purposeful design.[4] This eye-catching announcement persuasively evokes the spirit of conversation and discovery that IDCA pursued until its final convening in 2006.

This post was written by Maeve Coudrelle, PhD student in Art History at Temple University, and former Curatorial Assistant in Latino Design.

← In the Bag
Luxurious Lighting →