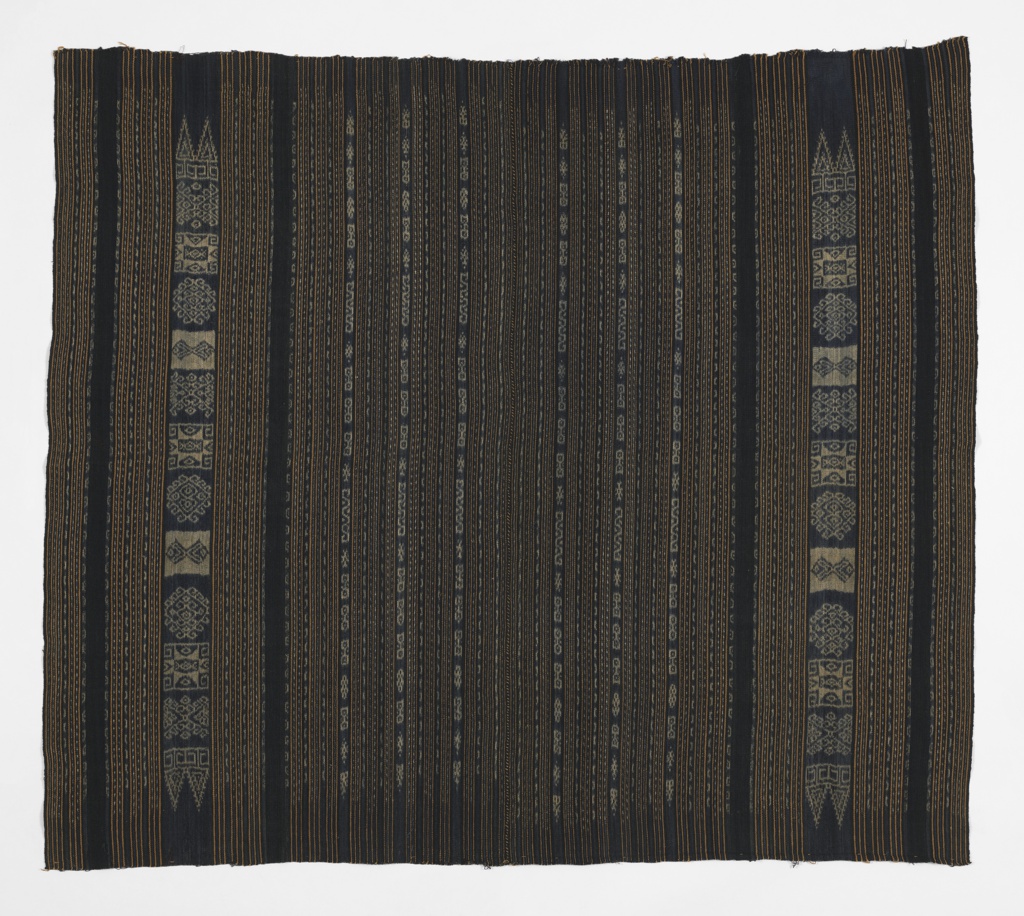 Ikat is a method of patterning threads with a multi-colored design prior to weaving. The warp threads are carefully measured and stretched on a frame; to create the pattern, areas are tightly bound with thread, raffia or plastic to act as a resist. When the bundle of yarn is dyed, these areas remain undyed, thus creating the design. Once the desired color and pattern is achieved, the warp is put on the loom and woven.

The tumpal motif, variously described as an arrowhead, stylized bamboo shoots, crocodile’s teeth, hills, mountains, or trees, is found in the top and bottom bands of this textile and takes the form of two elongated isosceles triangles, with hooked bases along a symmetrical centerline. Initially I thought the weaving must come from Odisha (formerly Orissa), India, because the stepped tree figure looks like the temple motif common in Indian ikat border patterns, and the curving lines of the motifs made me think of patterns from Odisha. But the shape of the textile did not relate to a typical sari or dupatta nor did the closely set warp threads look like an Indian ikat fabric.

Textiles with similar motifs are produced in other South East Asian cultures, including the islands of Indonesia, specifically Kisar, a small island only 81 square km in the Southwestern Moluccas or Barat Daya Islands. Several resources on-line pictured this motif, as well as the striped bands of solid lines of color alternating with narrow strips of warp ikat.[1] A line of diagonal stitches down the center indicates that two lengths of fabric were joined selvedge to selvedge; it was probably formerly stitched into a tube and worn as a sarong. This was confirmed by email correspondence with the David and Sue Richardson, who travel to the region regularly and document textile practices. They also suggested that this textile was dyed with the natural dyes found on the island, helping to date the textile prior to the advent of synthetic red dyes used over the last century at this site.

[1] See http://www.asiantextilestudies.com/kisartex-02.html by David and Sue Richardson for discussion of Kisar textiles. A similar textile is in the Pusaka Collection, https://ikat.us/ikat_276.php.

Wendy Weiss, University of Nebraska Professor Emerita of Textile Design, is an ikat weaver, natural dye gardener, and educator. She served on the Textile Society of America board as Communications Director from 2014-2018 and continues at Senior Editor.