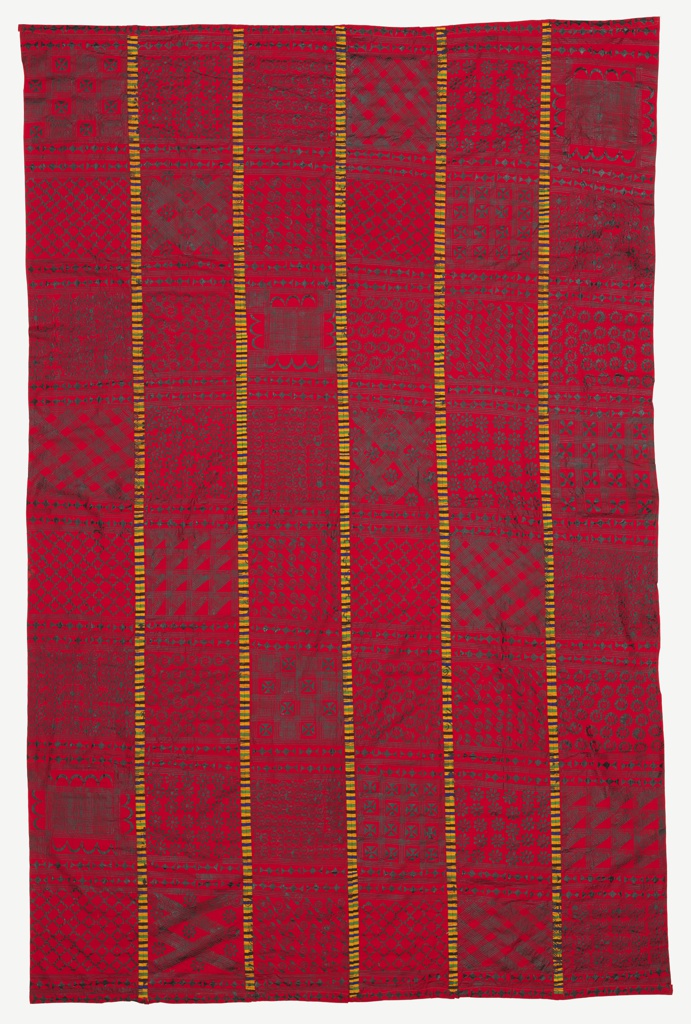 During a 2007 trip to Ghana I was traveling in a local tro-tro (mini-van) one weekend when we encountered groups of people wrapped in red or black printed cloth walking through the streets. This was a funeral procession. In Ghana, Asante funerals are a time of mourning and a time of celebration. The family and mourners were draped in adinkra cloth, characteristic of Asante funeral rituals.

The Asante are an Akan people centered in Kumasi, Ghana. Adinkra, like many African cloths is used during rites of passage. Although colorful “Sunday Adinkra” (kwasiada) can be worn for festive occasions including birth, marriage and other important events, the rite of passage most associated with adinkra cloth is death. Adinkra means goodbye in Twi, an Akan language. The three main colors of adinkra funerary cloth are kuntunkuni (brown), brisi (blue-black) and kobene (red). In some families, black is worn by the closest family members and in others it is red. White adinkra, generally worn for celebrations of the living, may be worn to the funerals of the very elderly.

While visiting Ntonso, a town northeast of Kumasi, I observed adinkra cloth being produced. It is printed with adinkra symbols — ideographic designs which often communicate proverbial principles developed by the Akan peoples of Ghana and Côte d’Ivoire. Although this cloth is primarily associated with the Asante and initially reserved for royalty, today it is worn by other ethnic groups.

Originally adinkra cloth was strip woven, then sewn together to create a whole cloth and printed. The stamps used for printing are created by carving symbols into sections of calabash. Raffia palm handles are inserted into the inner flesh of the gourd and bound with cloth scraps to form a handle. The base cloth is spread out on a padded table, and a comb-like instrument is used to create a grid on the cloth in which the symbols are stamped, one at a time. Adinkra duro, an ink made by soaking the bark of the Badie tree in water to soften it and then boiling it with iron slag to form a thick printing paste, is used to stamp the symbols onto the cloth. 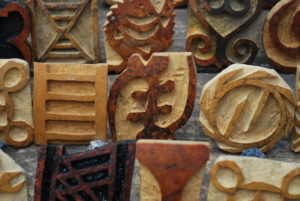 Pounding the bark of the Badie tree ©2009 Precious D. Lovell


Today, there are variations on this process. Strips of printed factory-made cloth may be embroidered together, as in this example, or joined with colorful, narrow handwoven strips. In addition to using factory cloth as a base, adinkra is also screen printed rather than stamped, and factory printed imitation adinkra is readily available.

The symbols selected for funerary adinkra are chosen to convey a message. The adinkra cloth featured above has several clearly identifiable symbols, including Adinkrahene, a design of concentric circles known as the “chief of adinkra symbols,” symbolizing greatness, charisma and leadership. Mmusuyidee, a Maltese cross-like motif, represents good fortune and sanctity. Dwennimmen, known as “ram’s horns”, connotes humility and strength. Mate Masie, a motif resembling two sets of eyes, one on top of the other, represents wisdom, knowledge and prudence. And finally, Bi Nka Bi, an organic shape with an S-like motif in the center, symbolizes peace and harmony. This Adinkra wrapper expresses a powerful message intended for the deceased.

Precious Lovell is an artist and educator whose work has been exhibited in the United States and internationally. She has traveled to 45 countries researching and collecting textiles and clothing. She teaches in the College of Design at North Carolina State University.

← As Seen from Above
Between Plants and People →

2 thoughts on “Adinkra: Message and Medium”

The author’s understanding and respect for the cultural and spiritual significance of Adinkra cloth connects a centuries old process with the hopes and aspirations of a people. Both are beautifully described with an attention to detail that allows the reader to appreciate the aesthetic of Adinkra cloth and the ethos of the people who produce it.

Also, it would have been helpful if the author had pointed out where to find each of the symbols (concentric circles, rams’ horns, eyes, etc.) on the cloth. I couldn’t find them in the photo.