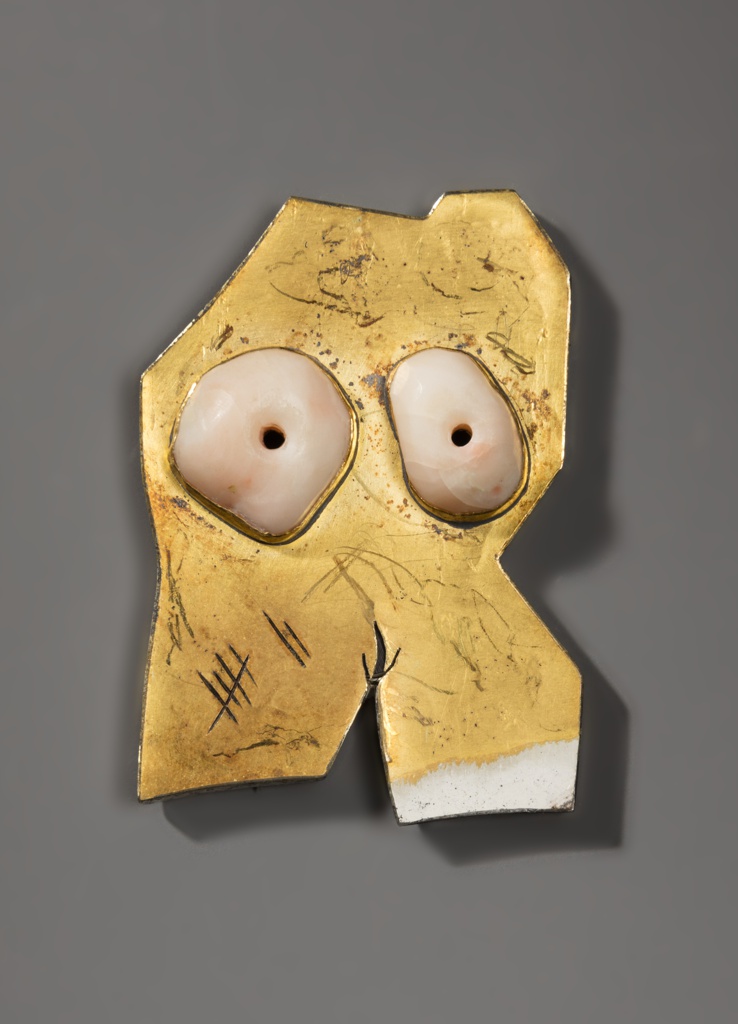 Confrontational, playful, and even cartoonish are some of the adjectives that describe Manfred Bischoff’s style.  Born in the Black Forest town of Schömberg, Bischoff began his training as a goldsmith’s apprentice and went on to study with Reinhold Reiling and Hermann Junger, both trailblazers in the modern art jewelry movement in Germany. Bischoff’s style was very much influenced by Reiling and Junger’s unconventional approach to jewelry design, which questioned accepted practices and delighted in imperfections. In response, Bischoff created works that had an unfinished and sketchy quality that almost seems drawn with a child-like penmanship.

Bischoff’s aesthetic is characterized by his use of fine quality materials, such as precious and semi-precious metals and stones coupled with a complex visual language of symbols and surreal figures. Every piece made by Bischoff is a protagonist starring in what Helen W. Drutt has suggested as a “theater of the absurd”[1] fashioned with a distinct personality, which makes each of his creations unique. In addition, his designs were inspired by nature, art, and music, and touched on universal themes, such as fear, death, lust, and sexuality with a tender, yet unsettling quality.

Although Bischoff chose not to delve deeply into the meaning behind his jewelry creations, his work is ripe for interpretation. For instance this magnificent brooch created in 1987, can serve as a representation of a female torso wounded by life, but proudly displaying its scars. The limbs and head are absent, leaving the body powerless and without identity. While the soft contours of the female form are transformed into angular edges, the brooch still communicates an overtly sexualized feminine figure—enlarged breasts and a vigorously etched vulva. The numerous marks, some as soft as pencil marks, others harsh and deep like knife cuts allude to pain or even physical violence.

Bischoff’s raw translation of the female torso can be viewed as a comment on the discomfort, sickness, and shame women are subjected to. It is a reminder of the pressure women face to fit into notions of western beauty standards that advocate for unattainable physical perfection. The burden to satisfy this model can lead women to have eating disorders, perform cosmetic surgeries, and use harmful corsets. These alarming realities unmask the grotesque aspects that lie beneath unrealistic beauty ideals. Bischoff encapsulates these unsettling experiences in his brooch. Moreover, by asking its owner to pin it to their chest he invites them to become intimate with this discomfort, to face a reality that we often want to hide, which is that our bodies are constantly subjected to pain, and therefore, will never reach perfection. Bischoff makes us confront a figure that has been wounded by life, and whose wounds have been covered with gold, exposing in the most visceral and contradictory way the relationship women have with their bodies.

Juliana Fagua is a Curatorial Intern in the Product Design and Decorative Arts Department at Cooper Hewitt, Smithsonian Design Museum. She recently graduated with a double major in Design and Art History from the Universidad de los Andes in Bogotá, Colombia.