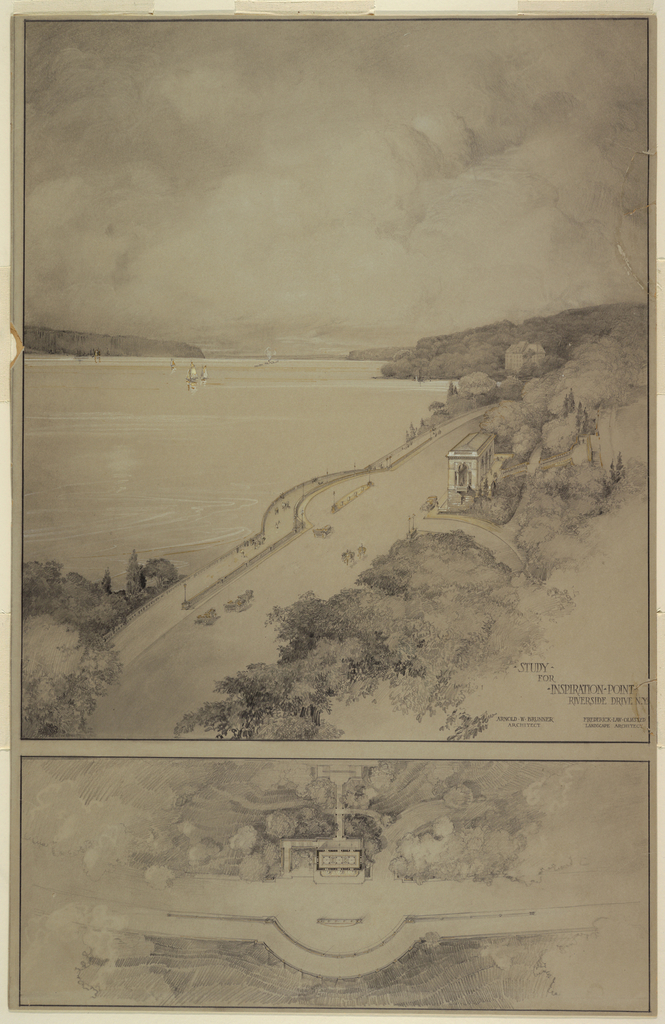 At the turn of the twentieth century, architectural projects throughout New York City were designed to prescribe how citizens interacted with nature. Study for Inspiration Point, Riverside Drive, New York City is a conceptual plan by landscape architect Frederick Law Olmsted (1822—1903) and architect Arnold William Brunner (1857—1925) for the development of a park and recreation area along the Hudson River. Until the 1930s, the northern tip of Manhattan Island was primarily privately owned. Along a steep hillside, in present day Fort Tryon Park, Olmsted and Brunner imagined a public space where pedestrians could walk, horseback ride, or take a drive along an open breezeway to connect with the natural scenery. This drawing presents two views of a romantic walkway, lined with a balustrade and lamp posts, and a vista with an ornate shelter called Inspiration Point. Couples and families are shown meandering along the river or making their way up the stairs to the large colonnade, while other characters are riding horses, enjoying horse-drawn carriage rides, or driving the latest town cars. 2018 National Design Award winner Anne Whiston Spirn described Frederick Law Olmsted as a “pragmatic visionary who, through a fusion of theory and practice, shaped the American landscape from city to wilderness.” [1] Embedded with cultural issues of leisure, this drawing presents a complex view of the nineteenth-century values and ideas that aimed to define the northern boundary of New York City. The narrative of the image unfolds in the foreground with the imposing beauty of the Hudson River Valley in the background—throughout the composition lines of wilderness and civilization blur.

Opened in 1925, the neoclassical sitting area known as Inspiration Point consisted of two levels: the upper, open air covered structure, and a lower level for pedestrians and motorists. Similar to the structure in Study for Inspiration Point, Riverside Drive, New York City, the lower level was accessible via stairs on either side of the building. After the Henry Hudson Parkway was built in the 1937, the area around the colonnade was cut off by both the northern and southern lanes of the parkway. The area fell into disuse for decades. Recent renovations of the park and trails along the Hudson River Greenway have opened Inspiration Point to a new generation of visitors. Today Inspiration Point is a popular rest stop for pedestrians or cyclists along the Hudson River at 190th Street, offering unobstructed views of the Palisades and the George Washington Bridge. Complementing Olmsted and Brunner’s  vision, the area is accessible by manicured trails connected to Inwood Hill Park to the north and Riverside Park to the south.

← Recycled Jamdani
Not Your Typical Wallflowers →

One thought on “Moments of Inspiration”

Hello,
I am the COO of Riverside Park Conservancy and found your posting quite interesting. Would it be possible to make a copy of this graphic. My intention is to frame it and present it to our Board Chair as a gift for years of service. We have been trying to find the right token to present to her and thought a copy of this print with the background story would make an excellent gift. My email is listed below and my number is 212-870-3075. I hope my request is not too far fetched. Sincerely, Jesse Ramos