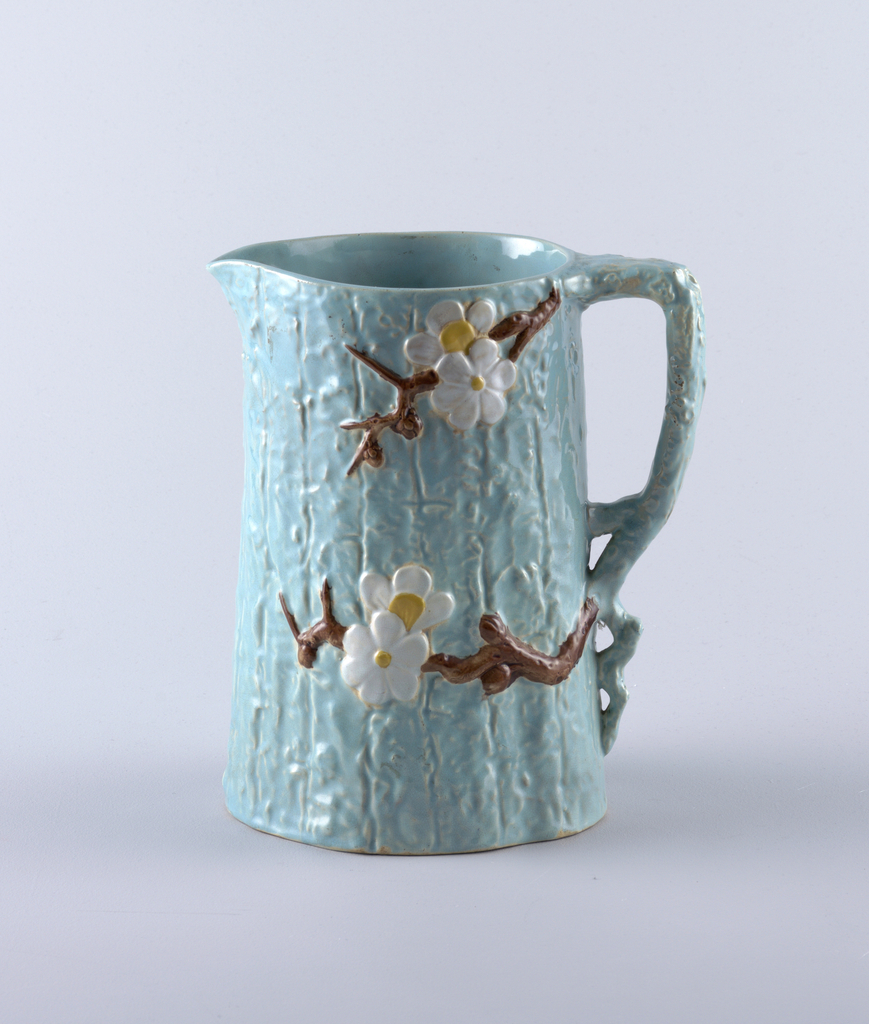 Searching through the collection, looking for something different to write about, I came across this lovely ceramic pitcher which features an exterior molded to resemble a tree trunk, branches with blossoms, and a gnarled branch handle. It captured my interest because its motif and colors are particularly evocative of Vincent Van Gogh’s painting, The Almond Blossoms. Upon investigation, I discovered that this pitcher was created a decade before The Almond Blossoms was painted. Considering that interest in Japanese art and design was prevalent during the last half of the 19th century, further research into Japonism yielded a woodblock print by Katsushika Hokusai (1760-1849) entitled Mount Fuji Viewed from Goten-Yama which dates to 1830. This detailed print celebrates the lushness of springtime and the glory of Japan’s cherry blossoms.

Japanese woodblock prints like Hokusai’s are known as ukiyo-e, and by the 1860s they were a source of inspiration for many artists. Ukiyo-e were ephemeral, created to meet a demand for inexpensive souvenirs and affordable art. Sold through the Japanese commercial market, these prints not only reached a broad slice of Japanese society, but found their way to the West as well. Van Gogh himself was an avid collector of ukiyo-e, amassing hundreds in his lifetime.

Except for Holland, Japan was closed to trade with the western world since 1641. This ban was effective until 1853, following the American expedition led by Commodore Matthew C. Perry. Prior to 1853, any encounters with ukiyo-e would have been serendipitous as ukiyo-e prints were sometimes used to wrap goods travelling back to Europe with the Dutch. As the Dutch traded with Europe and America, these printed pictures would be seen as parcels were unpacked.

1862 marked the year that Japan first participated in a universal event, sending items representing their country to the International Exhibition in London. That same year saw the establishment of the first boutique in Paris dedicated to Japanese wares, although it took until 1867, at the Paris World’s Fair, for the spotlight to focus on the decorative arts and objects from Japan. Throughout these years, shiploads of decorative items—including fans, kimonos, lacquers, bronzes, and silks—poured into England and France. This craze for all things Japanese lasted from the mid-19th century to the early 20th century, and exerted a considerable influence on Western arts and crafts. Eventually Japonism trickled down to the fields of fashion and décor, with goods produced in Japanesque motifs by makers including Tiffany in New York, and Minton and Company in Stoke-on-Trent, and reached stores such as Liberty in London.

This pitcher is a form of earthenware known as majolica. It was designed by Joseph Holdcroft and produced by his company, the Sutherland Pottery, which was established in 1870 in Longton, England. Prior to establishing Sutherland, Holdcroft spent eighteen years working for Minton where he became proficient in the production of majolica, earthenware decorated with colored tin or lead glazes. After 1906, the firm became Holdcroft Ltd. and operated through the 1920s.

Despite successful production of high quality majolica, there is little documentation of who the designers and modelers employed by Holdcroft were. Frequent themes of Sutherland/Holdcroft pottery were drawn from nature and include representations of emerald green pond lilies on dishes and bowls, or jugs and plates bearing a rustic dogwood branch and blossoms. What is the inspiration for this floral composition, a Japanese print or a European painting? We can follow a trail, but we are unlikely to find the exact source that inspired this pitcher.