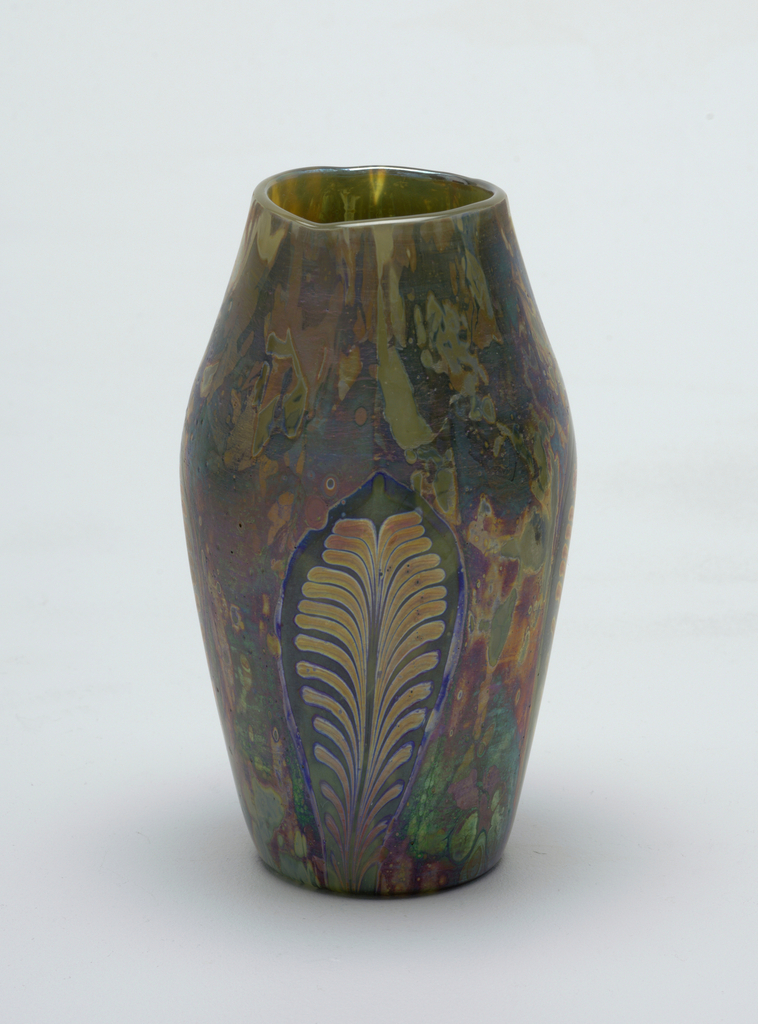 To celebrate the opening of Iridescence, on view through March 24, 2019, Object of the Day this week will feature iridescent objects in the collection. Today’s post was originally published on September 12, 2016.

Louis Comfort Tiffany’s earliest experiments in glass began in 1873. By about 1916 when this Cypriote vase was made, Tiffany was presiding over a large factory in Corona, New York where his staff continually worked to perfect new glass formulas, shapes, enamels, and glazes. Tiffany admired ancient glass and the forms, colors, and surface effects of this glass inspired his glasshouse’s production, including what is known today as the Cypriote pieces. Named Cypriote after glass excavated on Cyprus, this vase with feather decoration has a pitted and iridescent surface resembling the pockmarked texture and sheen of buried Roman glass. Jimmy Stewart, one of nine gaffers employed by Tiffany, recorded that the exterior effect was produced in part by rolling a gather of glass across an iron or marble surface, called a marver, covered with shards of glass. It is likely that other chemical elements such as potassium nitrate would have also been employed to create the crater-like effect. Then the piece would have been reheated, blown into its final form, and given an overall iridescent treatment.

This Cyrpiote Vase was  in the exhibition,  Passion for the Exotic: Louis Comfort Tiffany and Lockwood de Forest.

← Wearing Wings
Flowers Bloom amidst a Field of Iridescence →