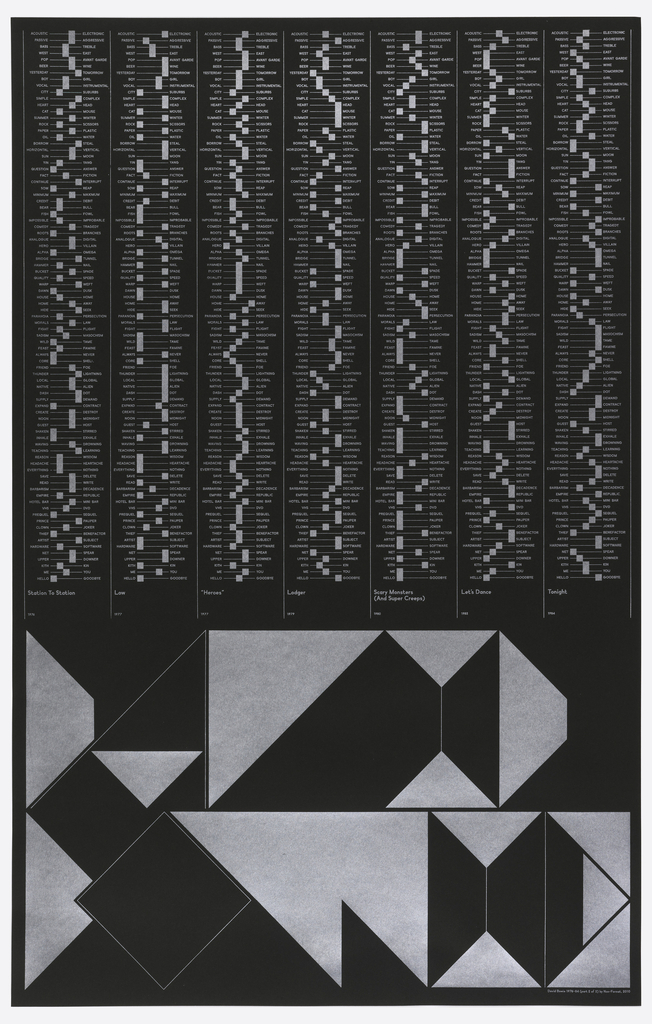 There are many ways to celebrate an anniversary.  To commemorate a decade of working together as the design duo Non-Format, Kjell Ekhorn and Jon Forss did not opt for the traditional gifting of tin, pewter, or aluminum.  Instead, they pooled their creative energies towards a personal project arising from their shared love of David Bowie.

Non-Format was founded as a creative direction and design firm in 2000, when Kjell and Jon were both living in England.  The company’s name was inspired by an article in Emigre (the popular design magazine) about the future demise of the DVD, and the impending “mythical non-format” that would replace it. The team shares both a personal and professional passion for music.

For their 10th anniversary, Non-Format decided to create a limited-edition set of two posters examining David Bowie’s discography.   As any die-hard fan of Bowie’s 1977-79 Berlin Trilogy of albums will know, one of the pop icon’s closest collaborators in the late 1970s was Brian Eno–the legendary musician, composer and record producer.  In a famous excerpt from his diary, Eno muses about the possibilities of looking at something on a spectrum of two extremes. He refers to this as axis thinking.  Axis thinking, Eno explains, can apply to both the lighthearted and the serious.  A haircut, for example, is rarely “neat” or “shaggy,” but somewhere between the two.  After the Berlin Wall fell, Eno argues, the polarities of communism and capitalism were “revealed to conceal a host of possible hybrids.”

For Eno, axis thinking was a method that could be used in the music studio, but Non-Format chose to use the system to retrospectively examine Bowie’s musical output.  To do so, Kjell and Jon collaborated as they have for much of their partnership, with the aid of the internet, as Kjell now lives in Norway and Jon lives in Minnesota.  They began by categorizing each of Bowie’s albums against pairs of extremes.  The album Scary Monsters, in their estimation, is more Bridge than Tunnel and more Scissors than Rock; the album Station to Station is more Fight than Flight and more Heart than Head.  To illustrate this categorization, Non-Format designed a simple series of mixers and sliders, echoing the equipment that Eno might have used in the recording studio. The aim, they said, was to “describe each Bowie album within Non-Format’s own framework of extremes.”

Non-Format designed a custom typeface to feature David Bowie’s name at the bottom of each poster.  Like the polarities that frame each axis, the letterforms suggest another balance of extremes, with razor-thin lines morphing into full geometric forms within each individual character.

← Up a Tree, Decoratively Speaking
A Lasting Remnant of a Friendship →