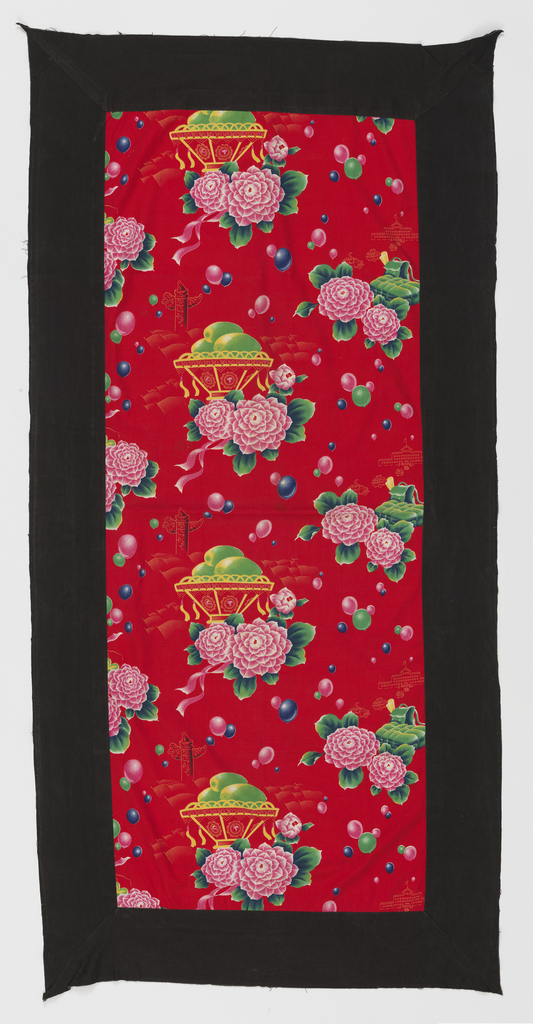 This quilt cover features a tasseled basket containing three yellow-green mangoes that refer to the mangoes that Mao Zedong (1893-1976) gave to workers. As leader of China’s Communist Party, Mao received a basket of mangoes as a gift from the visiting Pakistani foreign minister in August 1968. Mao re-gifted the non-native delicacies to a group of factory workers assigned to keep the peace at Tsinghua University, where warring factions of Red Guards had just been suppressed. Awed by the gift, the workers took measures to preserve the fruit in wax or formaldehyde; the mango quickly became a symbol of the working class. For about a year, mangoes were often evoked in propaganda as a symbol of the change of policy that removed students from the revolutionary stage and elevated the ideal of the worker. The China Institute in New York City hosted an exhibition, Mao’s Golden Mangoes and the Cultural Revolution, from September 2014 through April 2015, featuring more than 80 mango-related objects.

Behind the basket of mangoes stands an example of the huabiao, a ceremonial column found in traditional Chinese imperial architecture; a pair stand at Tiananmen, which was the entrance to the Imperial City of the Ming and Qing dynasties. The name of the famous Beijing monument means “Gate of Heavenly Peace.” Also depicted are musical instruments, balloons, a bedroll, and a satchel containing Mao’s highest directive.

Rachel Ward Sepielli is a graduate student in the History of Design and Curatorial Studies program at the Cooper Hewitt, and is a Curatorial Fellow in the Textiles Department.

← What Color Is Your Buffalo?
Beautiful Imperfections →