What Color Is Your Buffalo? 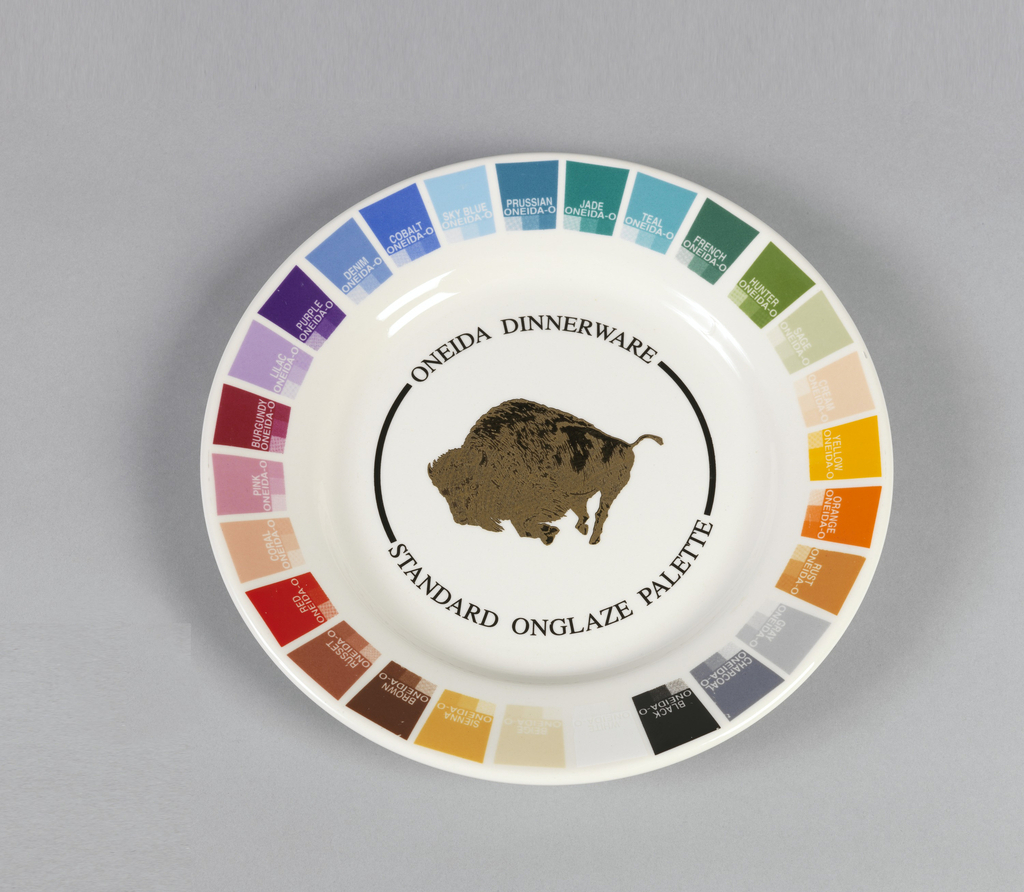 Sample plates are produced by manufacturers of ceramic tableware as a means of demonstrating the colors with which items, usually in a particular product line, could be glazed. Sample plates provide insight into the colors—and, in some cases, decorative patterns—that were available and popular at particular moments in time. The Cooper Hewitt collection includes several ceramic sample plates spanning nearly a century, from the 1880s to the 1970s, when this plate was made to illustrate the glaze colors available on Buffaloware, a line of Buffalo China.

Founded by The Larkin Company, a soap manufacturer, in 1901, Buffalo China produced soap dishes and other ceramics that were offered as premiums for purchasers of soap. The Larkin Company’s desirable premiums (including furniture, glass- and silverware, apparel, tea, coffee, chocolates and more) led to its extraordinary success, measured by annual sales of $28 million in 1920. [1] The company’s headquarters in Buffalo, NY, was designed in 1903 by Frank Lloyd Wright (and demolished in 1950 after the company’s demise). The years 1922-23 represented the last time Buffalo China appeared in Larkin’s premium catalogue. Thereafter, Buffalo China manufactured ceramic tableware for use by hotels, rail lines, airlines, and steamships, much of it custom designed. [2] In 1940, Buffalo Pottery was acquired by Oneida Ltd.

In 1848, John Humphrey Noyes established a religious and social society in Oneida, New York, known as the Oneida Community, often considered a utopian society. The Community was founded on the principles of self-perfection and communalism, which translated into shared work and living, in which the interests of one are the interests of all. The Oneida Community produced various goods including  silver knives, forks, and spoons. After the dissolution of the Community, in 1879, former members formed a joint-stock manufacturing company that continued to produce flatware. Today, the company is the world’s largest manufacturer of stainless steel flatware, and the largest provider of tableware to the food service industry in North America. [3]

This Oneida Ltd. Buffaloware sample plate is earthenware with a glossy white glaze and features, appropriately, the image of a buffalo surrounded by the “standard onglaze palette”—swatches of the colors available for purchase in the Buffaloware line of dishes, from Sky and Prussian blues to Sienna, Coral, French Green, and everything in between, even black and white. Smaller passages within the main colors demonstrate the different saturations available in the glaze colors.

Nick Stagliano is a Curatorial Fellow in the Product Design and Decorative Arts department at Cooper Hewitt, Smithsonian Design Museum, and a first-year student in the History of Design and Curatorial Studies program offered jointly by Cooper Hewitt and Parsons School of Design. He grew up near Oneida, New York.

[1] Howard R. Stanger, “From Factory to Family: The Creation of a Corporate Culture,” Harvard Business School, http://hbswk.hbs.edu/archive/2154.html (accessed 7 May 2018).

5 thoughts on “What Color Is Your Buffalo?”

It would be interesting to se, had you shown it, the demolished FLW building. Our lost history is always worth a look to see what the present did not value of the past.

How much of the tableware is actually produced in the United States? Where is it produced?

I have a very old pitcher with what I believe bears an early Buffalo Pottery/China raised mark. It is very worn and hard to identify even when rubbed. I have just learned that there was an Albino Line with village and seaside patterns. I believe they were on Deldare blanks. I can’t find any information on the Albino line or on my lovely old pitcher. If you can point me in a direction where I might be able to identify it as a part of Buffalo Pottery history I would be grateful. I have not seen another like it despite searching for 2 years. Information on the Albino line is very hard to find. I know this is a reply to an old post, but I had to try. Thank you in advance

I see you have a color labelled Purple on the plate; how do YOU define purple? When was it most fashionable? Does it have any special significance?