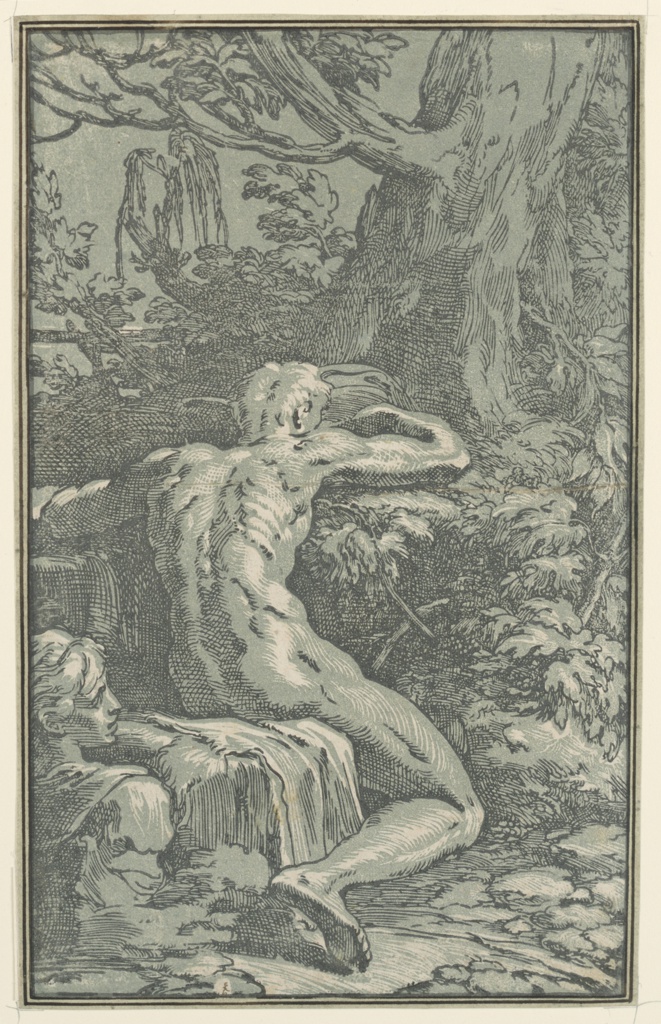 This print, with its striking green hue, is the result of an innovative collaboration between two Italian Renaissance artists. Working together in Bologna in the late 1520s, the painter Francesco Mazzola (called Parmigianino, 1503-1540) and the printmaker Antonio da Trento (1508-1550) were early adopters of a new technique that allowed for the production of multicolored prints like this one, called chiaroscuro woodcuts.[1] Borrowed from Italian, the term “chiaroscuro” signals a close, contrasting juxtaposition of areas of light (chiaro) and dark (scuro). In printmaking, it more specifically refers to the building of visual depth through the superimposition of separate layers of differently colored ink.

To create a standard woodcut, an artist applies ink to a single carved block, which is then impressed on paper. A chiaroscuro woodcut, on the other hand, involves multiple carved blocks. Each of these is inked with a different color tone, and impressed on the paper in succession. For this particular image, the printmaker employed two blocks, one with green ink, the other with black. The green fills most of the sheet, while the black defines the forms and creates zones of shadow. A third color—creamy yellow-white—is provided by the paper itself. Revealed in the areas lacking ink, these bright spaces serve as highlights, contributing to the illusion of depth. The result belies the manufacture: the final image approximates a drawing in black and white ink on green paper.

As designer, Parmigianino was responsible for devising the composition, which da Trento then translated into the print medium. Here, the nude figure of a young man—heroically muscled but still lithe and lean—can be directly related to one of Parmigianino’s drawings, now in Modena.[2] The subject of the image, however, remains somewhat mysterious. The traditional title, “Nude Man Seen from Behind,” dates to the sixteenth century.[3] More recently, some interpreters have proposed that the seated young man with his elegant, elongated back should be identified as Narcissus, a character from Ovid’s Metamorphoses.[4] Enamored of his own reflection, Narcissus gazes into a still pool within a secluded wood. The nymph Echo, thus neglected by her beloved, wastes away until only her voice remains. Perhaps hers then is the stony female profile that appears at the lower left of the print, captured in the process of disappearing from sight.

[1] On the history of the medium and its Italian practitioners, see Naoko Takahatake, ed., The Chiaroscuro Woodcut in Renaissance Italy (Prestel Verlag GmbH & Company KG, 2018), produced in conjunction with an exhibition of the same name organized by LACMA (June 3 – September 16, 2018) in association with the National Gallery of Art, Washington (October 14, 2018 – January 20, 2019). Versions of this print (some in different colors) are included in the exhibition. (Standard reference: Bartsch XII.148.13.)

← French Revolution Wallpaper
What Color Is Your Buffalo? →