A Performance Poster for Glass 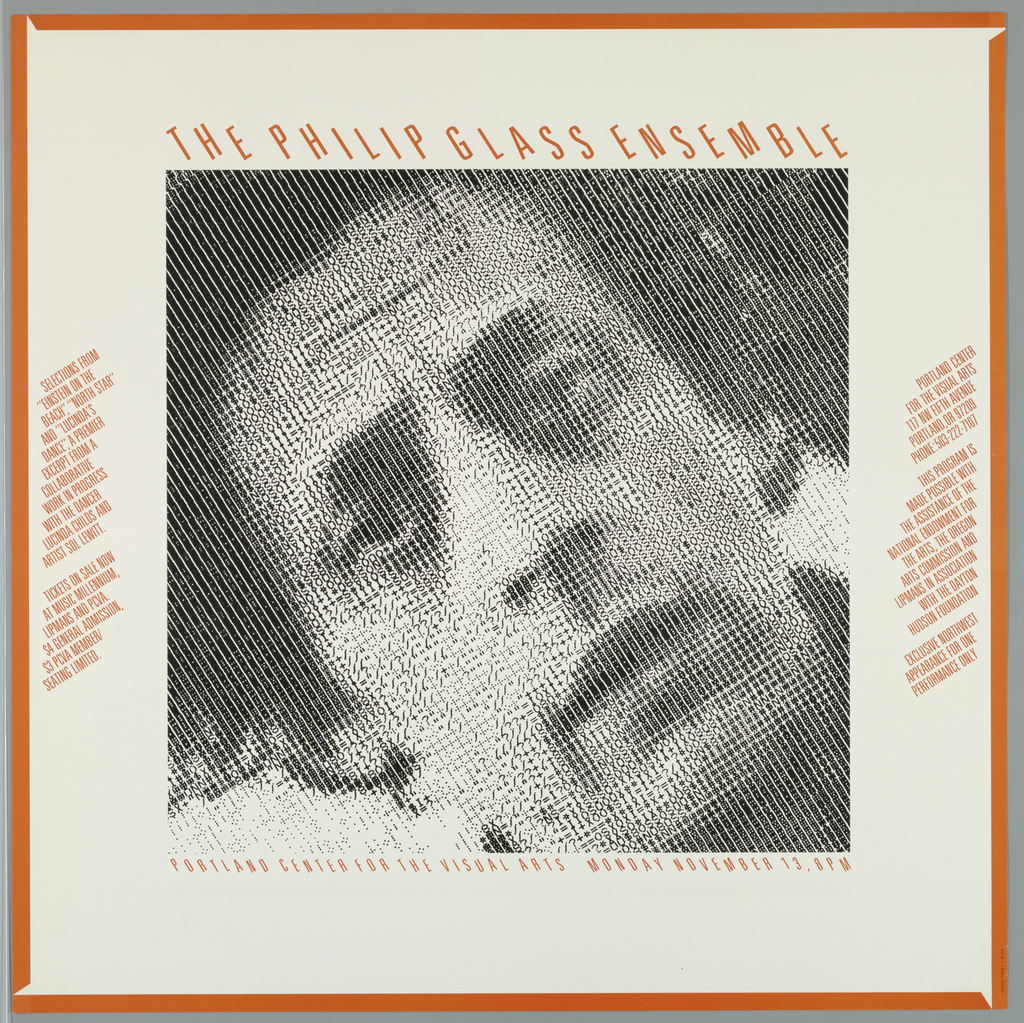 In 1967, the composer and musician Philip Glass formed the Philip Glass ensemble in New York, a group of seven musicians playing keyboards and woodwinds, amplified through a mixer. Glass previously studied at the University of Chicago, Julliard and in Paris with Nadia Boulanger, but found himself frustrated with modern music. This dissatisfaction led him to experimental sounds and compositions, creating immersive aural experiences for audiences. Glass frequently collaborated with his friends and fellow artists, such as Bruce Nauman, Richard Serra, Twyla Tharp and Paul Simon. In 1975, Glass composed his first opera for the ensemble, “Einstein on the Beach,” a five-hour score with performances of writings by poets Christopher Knowles, Samuel Johnson and the dancer Lucinda Childs.[1]

This poster in Cooper Hewitt’s Drawings, Prints and Graphic Design collection is for a performance by the Philip Glass Ensemble at the Portland Center for the Visual Arts in 1979. Featuring excerpts from Einstein on the Beach and North Star, the performance also unveils Lucinda’s Dance, a collaborative work in progress by Lucinda Childs, visual artist Sol Lewitt and Philip Glass. “Dance” is a three-part production, consisting of two group works and one solo performed by Childs herself. Each section has a distinct score by Glass, but the dancers move across the stage behind a gauze curtain in a continuous interpretation of steps, turns and jumps.[2] Sol Lewitt created films for the performance; he recorded the dances from different angles and incorporated stills of the dancers and their gestures, made up of hundreds of continuous elements. When Lucinda’s Dance is performed, these films are projected onto the translucent screen, creating an additional dimension of action and movement. The layering of imagery onto live dancers disarms the viewer’s senses and forces him or her to enter the surrealism of the theater.[3]

Designed by graphic designer Joseph Erceg, this promotional poster for Glass’s concert at the Portland Center incorporates many of the performance’s visual elements. Geometric forms, letters and symbols come together to compose a head shot of Philip Glass, recalling the iconic 1969 pointillist painting of Glass by his close friend, the artist Chuck Close. Close began the portrait with a photograph of Glass and then plotted it in point onto a large canvas using gridded lines.[4] The layering of the symbols in Erceg’s poster photograph not only alludes to this memorable profile, but it also echoes the movements of the nebulous dancers in Lucinda’s Dance. Moreover, the blurred photograph evokes the atmospheric nature of Glass’s compositions. Erceg’s utilization of mathematical forms may also be a nod to Sol Lewitt’s artworks, in which Lewitt uses geometry and order to produce striking, graphic works. Despite its two-dimensionality, the Philip Glass Ensemble poster produces a new visual language that captures the performance’s synthesis of multiple media and sensory experiences.

Lily Gildor is a candidate in the MA History of Design and Curatorial Studies program offered at Parsons The New School of Design jointly with Cooper Hewitt, Smithsonian Design Museum. She served as a Master’s fellow in the Drawings, Prints and Graphic Design department.