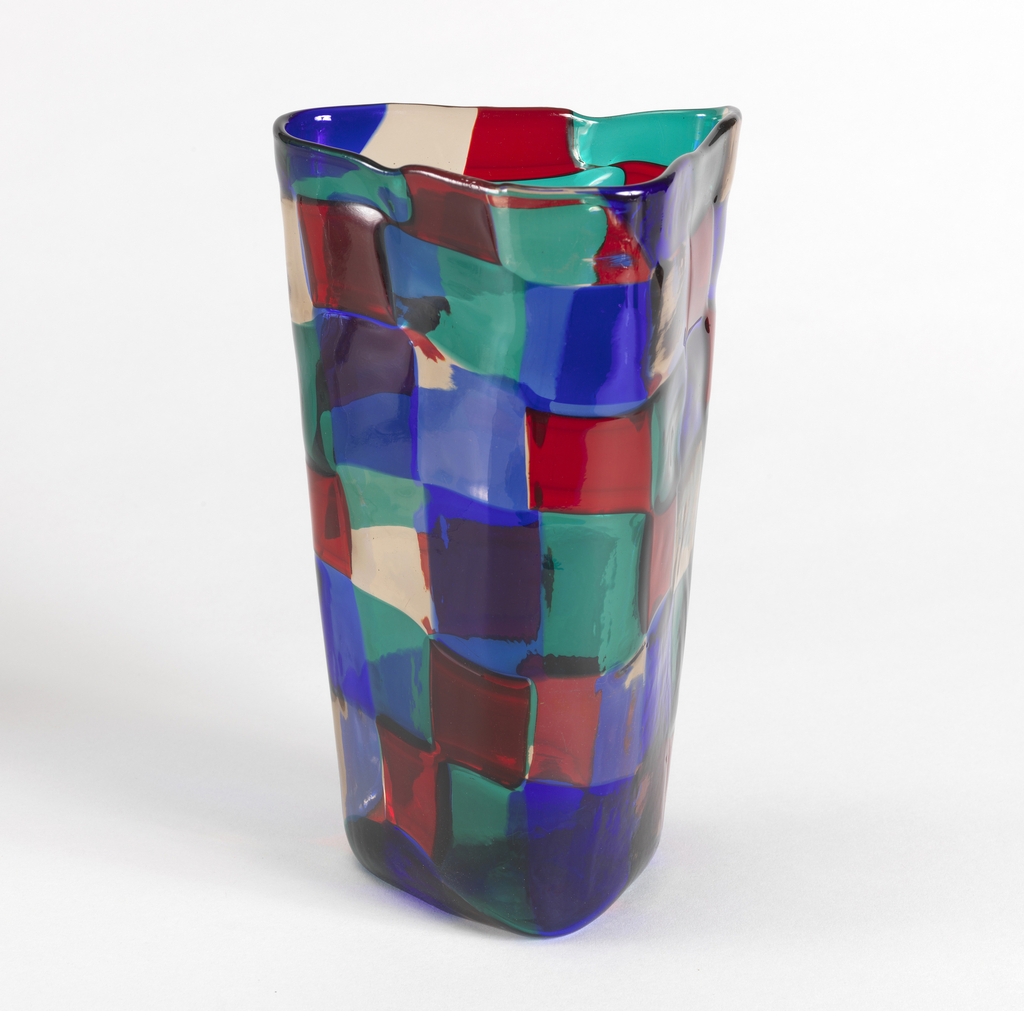 To celebrate the opening of Saturated: The Allure and Science of Color (May 11, 2018-January 13, 2019), Object of the Day this month will feature colorful objects from the exhibition. This post was originally published on January 1, 2013.

Murano, an island located just north of Venice, Italy, in the Laguna Veneta, has been a glass-making center since the late 13th century. This cheerfully colorful pezzato (dappled) vase was produced by the Venini Glassworks of Murano. Founded by Paulo Venini in 1925, the firm retained the great technical traditions of Venetian glass-working methods while developing a new aesthetic, and has been credited with reviving Venetian glass design in the 20th century. Fulvio Bianconi, creator of this vase was one of the key glass designers there in the years after World War II. In the 1950s, Bianconi’s pezzato vases were among the most popular of Venini’s wares. The bright coloring and casual forms of the pezzati reflected a new direction in glass design. Bianconi was born in Padua and moved to Venice where he studied at the Accademia de Belle Arti and the Liceo Scientifico before embarking on his career as a glass designer. In the late 1940s, he was hired by the Venini Glassworks and eventually became its artistic director. His original designs and innovative techniques for Venini included pezzati pieces similar to this vase, vasi a inclusioni (vases with inclusions) and a fasce (banded) pieces.

Pezzato glass, originally developed by Bianconi around 1950, is made by fusing together square or rectangular shaped pieces of glass, usually in several colors, in a patchwork-quilt-like arrangement. The resulting flat sheets of fused glass can then be heated and shaped into a vessel. The roughly triangular body of this vase features fused irregular squares in bright translucent red, blue, green, and clear glass. When light passes through the intense and overlapping hues of the glass form, it takes on the appearance of a patchwork of light.

This object is currently on view in the exhibition Saturated: The Allure and Science of Color.