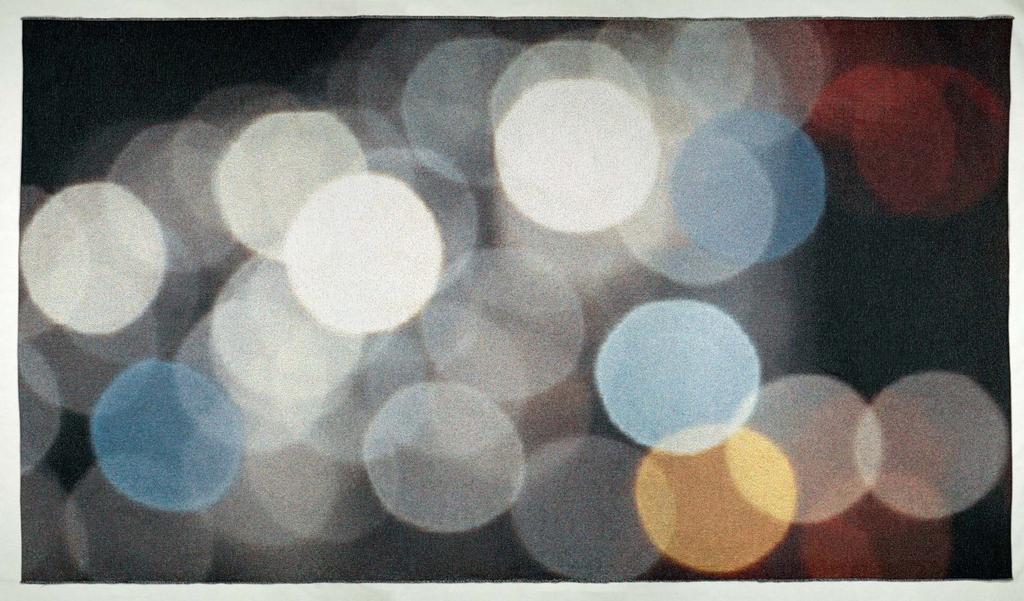 To celebrate the opening of Saturated: The Allure and Science of Color (May 11, 2018-January 13, 2019), Object of the Day this month will feature colorful objects from the exhibition. This post was originally published on December 12, 2014.

Grethe Sørenson’s digitally woven hanging Rush Hour 2/ Shanghai is part of her Traces of Light series, created in a collaboration with her filmmaker/director husband, Bo Hovgaard, that captures big cities at night. Hovgaard’s video camera is unfocused as he captures the light in Shanghai from driving cars and advertising signs. Sørensen selects individual images from the video and translates photographic pixels into threads, video recordings into weavings.

Grethe Sørensen gained her technical proficiency through years of hand weaving. Working from the idea that there is a similarity between pixelated images and the graphic expression for a weave construction, she began to focus on digital technology and became inspired by the unparalleled control of computer-aided looms. “As in four-color printing, where all the shades are created by mixing four colors on white paper, the shades in my woven motifs are created by mixing threads of the basic colors red, green, blue, cyan, magenta, yellow, black and white. This technique gives the possibility of making smooth color gradations and an almost photorealistic reproduction of the image.” In CMYK printing, red, green, and blue are secondary colors, created by mixing cyan, yellow, and magenta on white paper. Because yarns are not translucent like inks, Sørenson needed all six colors, plus black and white, to achieve all the colors.

In 2010 Sorensen wove a small sample of Rush Hour 2/Shanghai on her jacquard loom, and then produced this large work on a digital jacquard loom at TextielLab in Tilburg, The Netherlands. TextielLab has state-of-the art textile machinery and regularly collaborates with international artists on public and private commissions.