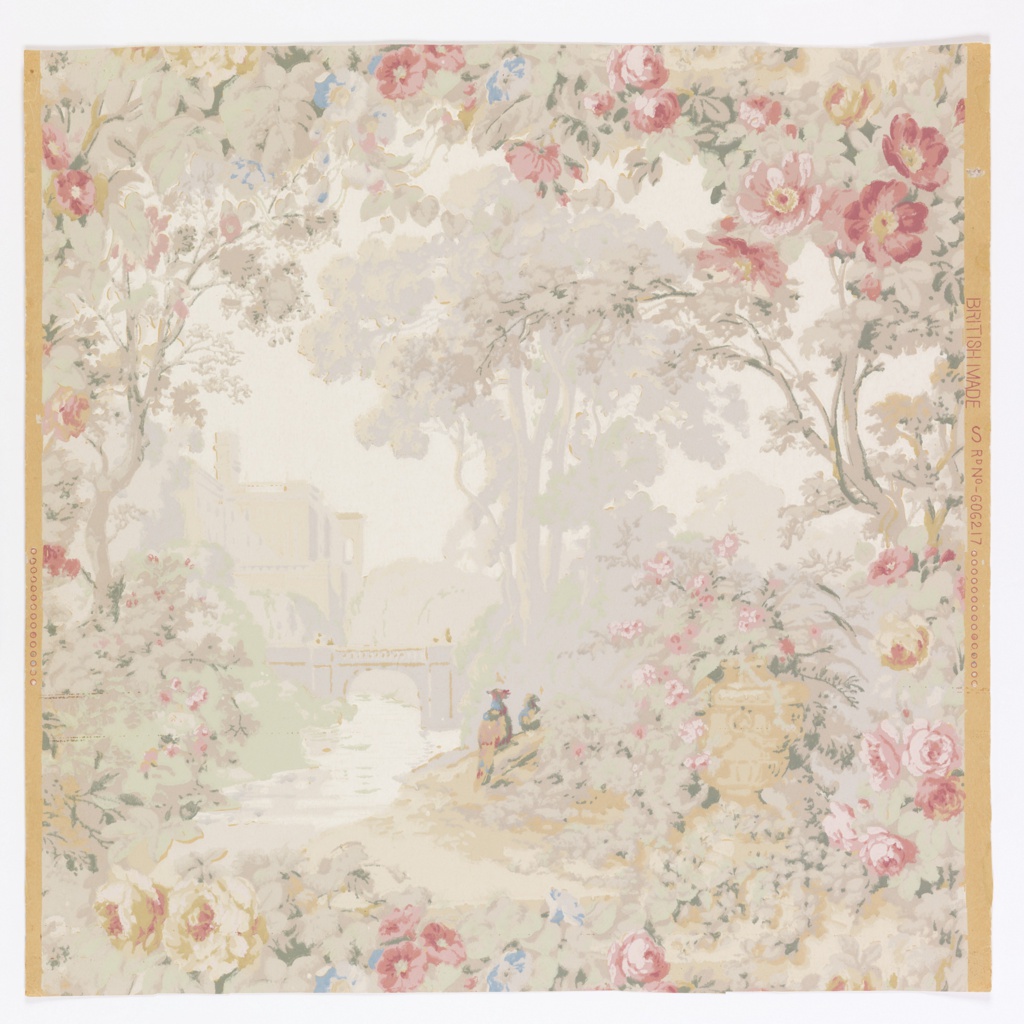 Wrapped in a warm summer haze, a pair of birds, at the center of the composition, overlook a flowing stream surrounded by a flower filled landscape. The famed Windsor Castle idly appears in the background, surveying the quiet scene below. Hushed yellows and greys, in addition to the creamy white background, create an almost ethereal atmosphere as defining lines for major elements of the composition come in and out of focus. The design for this dream-like sidewall by Arthur Sanderson & Sons was registered in 1912 and given the popularity of the design continued to be advertised until 1939. Though printed by machine this design appears to have been inspired by the earlier French landscape wallpapers.

Founded in 1860 by Arthur Sanderson in London, England, the Arthur Sanderson & Sons wallpaper and home goods company is one of the oldest surviving manufactures of wallpaper in England. Sanderson entered the business as an importer of French wallpapers and eventually opened his own wallpaper factory in Chiswick around 1881. After his death in 1882, his sons inherited the company and expanded its scope to include other types of textiles, which cemented its popularity with British and American consumers. In 1940, Sanderson bought the archives and existing stock of Morris & Co. which had gone into voluntary liquidation, and continues to print the wallpapers today using the original woodblocks. Today, the Sanderson and Morris brands are owned by Style Library, the largest soft home furnishings company in the United Kingdom, with a focus on creative innovation and historical preservation.

One thought on “Shades of Windsor”

i was delighted to see the sample of this wallpaper today in a search through the site looking for something else. the essay is well written, yet, if the paper was indeed called ‘ windsor castle’ by the seller, this was a sales ploy—there is no relationship between the imaginary, rather italian-looking building in the paper to the gothic revival ‘real’ windsor castle in england.

the same wallpaper, in darker shades–greens and browns–was installed in the library of my great grandparents’s ca 1900 home in hattiesburg, ms, in the early 1950s by my grandmother, who was remodeling the house. i never thought of it as ‘windsor castle’ even from childhood and my grandmother never mentioned this term as the name for the paper, though she must have known it when she bought it.

this sample was given to the cooper-hewitt by my great friend sam dornsife, so, another nice personal connection to this ‘little piece of paper’!