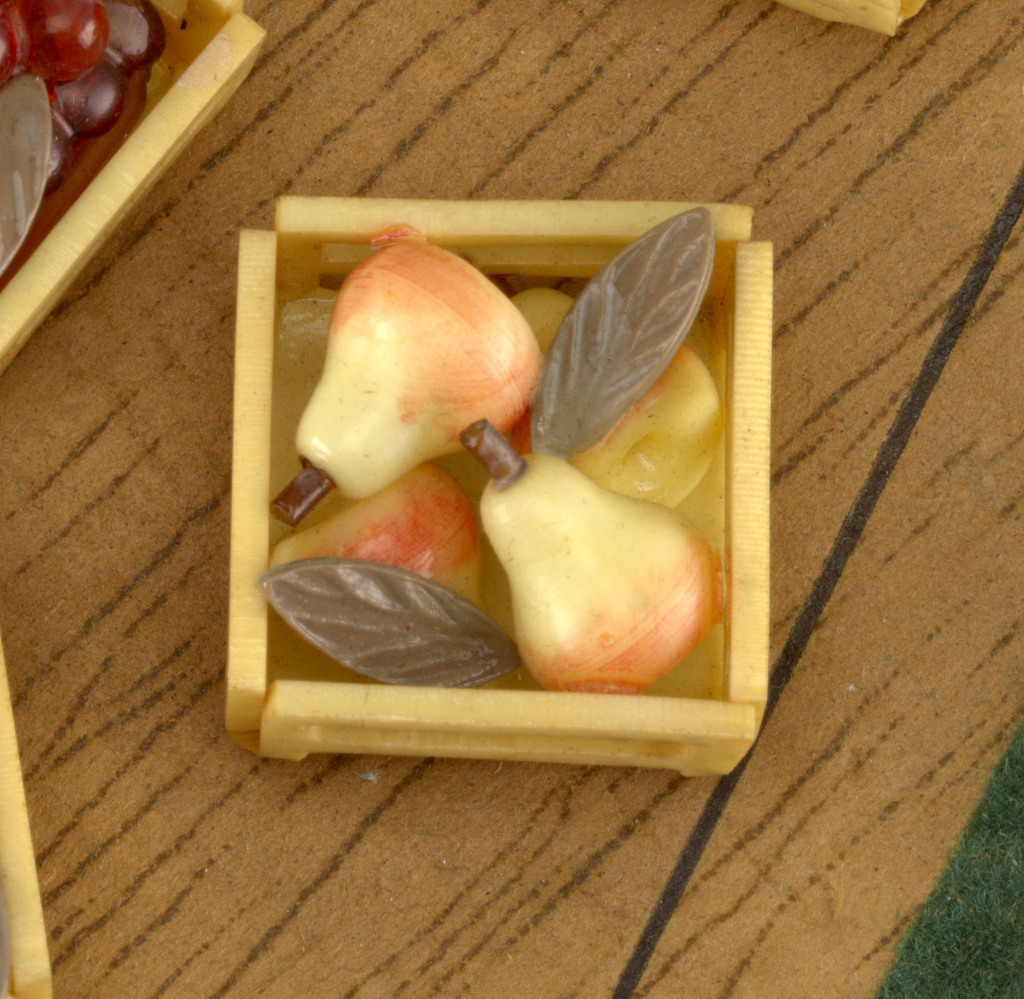 In celebration of The Senses: Design Beyond Vision, this Object of the Day post takes a multisensory approach to an object in Cooper Hewitt’s permanent collection.

Jelly candies in the form of fruit? Toys for children? Miniatures? This whimsical and colorful object is actually a button made of celluloid plastic. In an open-topped crate, a group of pears are rendered in ripe red and yellow hues with contrasting green leaves, as though they were freshly picked from the tree. Looking at these pears makes one’s mouth water with a desire to have a bite.

This crate of tasty looking pears is one of a set of nine Crated Fruit buttons designed in 1947 by American industrial designer, Marion Weeber Welsh. Each button portrays different fruits such as strawberries, oranges, and pomegranates. The colorful buttons, mounted as a group on a commercial display card, evoke the sensuality of luscious fresh fruit, in lively contrast to the brown of the card that depicts a wood grained crate surrounded by velvety green felt suggesting a field of grass. The labeling on the elaborate display card, promoting the names of the designer and manufacturer, along with the name of the button series, suggests that the Crated Fruit buttons were manufactured as a product line for the home seamstress, rather than as novelties merely for show.

Active as a designer from the 1940s-80s, Weeber Welsh first gained national attention in 1941 for her Wise Old Owl compact and jewelry designs. She was later recognized for her Classic Column cutlery, which won the Design Excellence Award during the 1967 Montreal Expo World’s Fair.[1] Although the Crated Fruit buttons may not be among Weeber’s best-known designs, they show how she took inspiration from nature—animal and plant motifs—particularly in her early career. A wooden brooch designed by Weeber Welsh in the early 1940s is in the shape of a bowl holding three pieces of fruit. Another depicts a pear with a leaf, the same motif as that of this featured button.