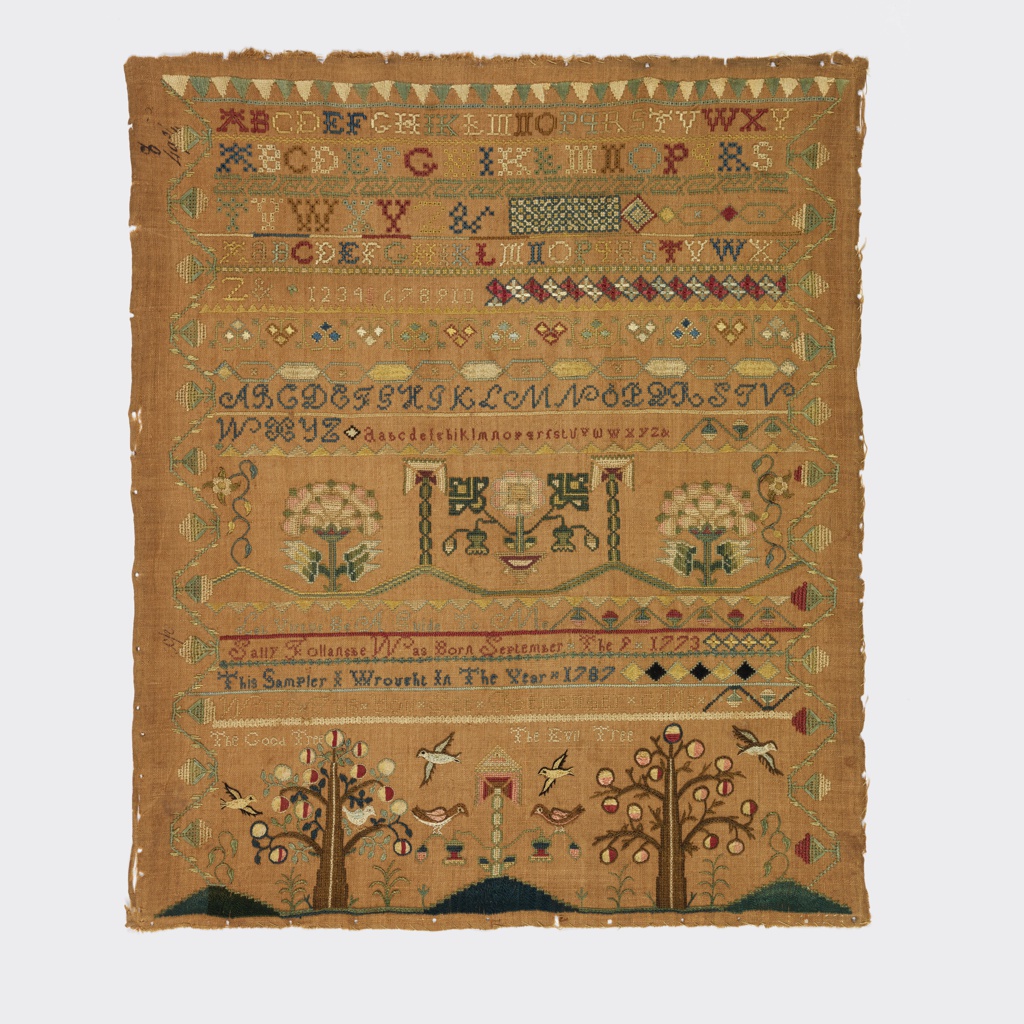 Sally Follansbee’s 1787 sampler is part of a group of samplers from the towns of Newbury and Newburyport, Massachusetts. These works can be identified by a number of motifs that were reused and modified from the 1750s through the early 1800s. The stylized floral band on Sally’s piece appears on samplers by several Newbury and Newburyport girls, including Anna Fowler in 1754 (private collection), Sarah Toppan in 1754 (private collection), and Mary Batchelder in 1773 (CH 1941-69-166). An almost identical band was worked on English samplers from at least 1704, and is also seen on Newport, Rhode Island examples from the 1730s and 1740s. The multicolor sawtooth borders and fruit trees on Sally’s sampler are also typical Newbury and Newburyport motifs. Other elements commonly found on samplers from the group are trefoil borders, blue vases with flowers, animals, multicolored parrots, and long-tailed black birds. The pictorial motifs on Sally’s sampler are of biblical origin. Birds surround a tree labeled “The Good Tree,” and fly away from a second tree labeled “The Evil Tree.” The sampler is framed on either side with a strawberry vine, rather than the more typical trefoil border.

Born in 1773 in Salisbury, Massachusetts, Sally Follansbee was the daughter of Joseph Follansbee (b. 1747) and Anna Currier (1748–1827). Newburyport is separated from Salisbury by the Merrimack River, and could be reached by ferry in the eighteenth century. It is possible that Sally attended school there, or in the neighboring town of Newbury. On June 20, 1797, she married Ralph Cross Flanders (1770–1809), a ship’s captain from Salisbury. The couple had two sons, Ralph Cross Flanders, Jr. (1803–1829) and Joseph Follansbee (b. 1805). Sally died in 1813 at the age of forty. She is buried next to her husband in Salisbury Point Cemetery.

Jennifer N. Johnson is a graduate of the Master’s Program in the History of Design and Curatorial Studies offered jointly by Parsons and Cooper Hewitt, Smithsonian Design Museum. While pursuing her studies, she completed a two-year fellowship researching the museum’s American sampler collection.

One thought on “Massachusetts Sampler”

What a lovely format to learn of samplers! Loved it! Well presented.