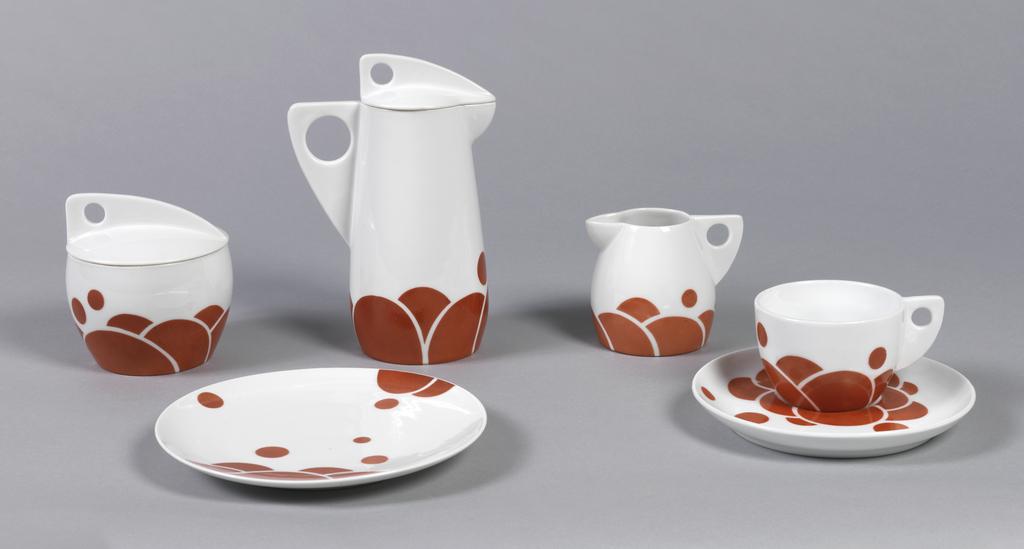 In celebration of Women’s History Month, March Object of the Day posts highlight women designers in the collection. Today’s blog post was written by Adriane Dalton and originally published on September 17, 2013.

Born in 1877, Jutta Sika was an Austrian designer working in a variety of different media. Sika received formal training in both graphic and costume design but is best known for her ceramic and glassware designs. In 1895 Sika studied at Graphische Lehr und Veruchsantalt (Graphic Education and Research Institute) under Joseph Eugen Hörwarter and later enrolled at the Kuntsgewerbeschule (School of Applied Arts) where she studied under Friedrich Linke, Koloman Moser, Rudolf Ribarz, and Alfred Roller.[1]

It was at the end of this second portion of her formal education that Sika founded Wiener Kunst im Hause (Viennese Art in Home), a group of five men and five women who were students from the Kunstgewerbeschule. The successful reception and praise of the group’s designs are noted as being a potential catalyst for the formation of the Wiener Werkstätte (Viennese Workshops), founded one year later by Kuntsgewerbeschule professors Koloman Moser and Josef Hoffmann. Both Wiener Kunst im Hause and Wiener Werkstätte were founded on the principle of “Gesamtkunstwerk” (total work of art), and focused on creating objects for a harmoniously unified space through the design of the textiles, furniture, and functional objects.[2]

The women of the Wiener Kunst im Hause, who were responsible for the design of both ceramic and textiles, used patterns evoking traditional Austrian folk art.[3] This coffee set, though certainly compelling on its own, would likely have existed as part of a series of similarly designed objects in a range of materials meant to contribute to a unified sense of design within the home. This same sense of unification exists even within this collection of objects that make up the coffee set.

The red circles on the set’s surface, some overlapping to form a cluster while other smaller circles float freely, are not just an afterthought applied to an existing ceramic form. Rather, each piece in the set is intentionally designed in both surface and form, and maintains a sense of unity and continuity even among objects with varying functions. This is apparent in the bottom heavy curves of the vessels and in the slight curl of the saucer’s lip, each individual form seeming to invite the warmth of coffee, the viscosity of cream, and the preciousness of sugar. The handles and lids that accompany these forms are shaped in such a way that their presence disrupts neither the form nor the surface design. It is each element of the coffee set’s five individual pieces that culminate in allowing it to become a small Gesamtkunstwerk.

Adriane Dalton is a graduate of the History of Design and Curatorial Studies program offered jointly by the Parsons School of Design and the Cooper Hewitt, Smithsonian Design Museum. She is a studio jeweler, writer and independent curator whose interest in adornment overlaps both her artistic and research pursuits.

← In the Eye of the Tornado: Rethinking the Limits of Design
Drawing by Touch →

I have 2 Jutta Sika paintings I would like to sell. Can you help?