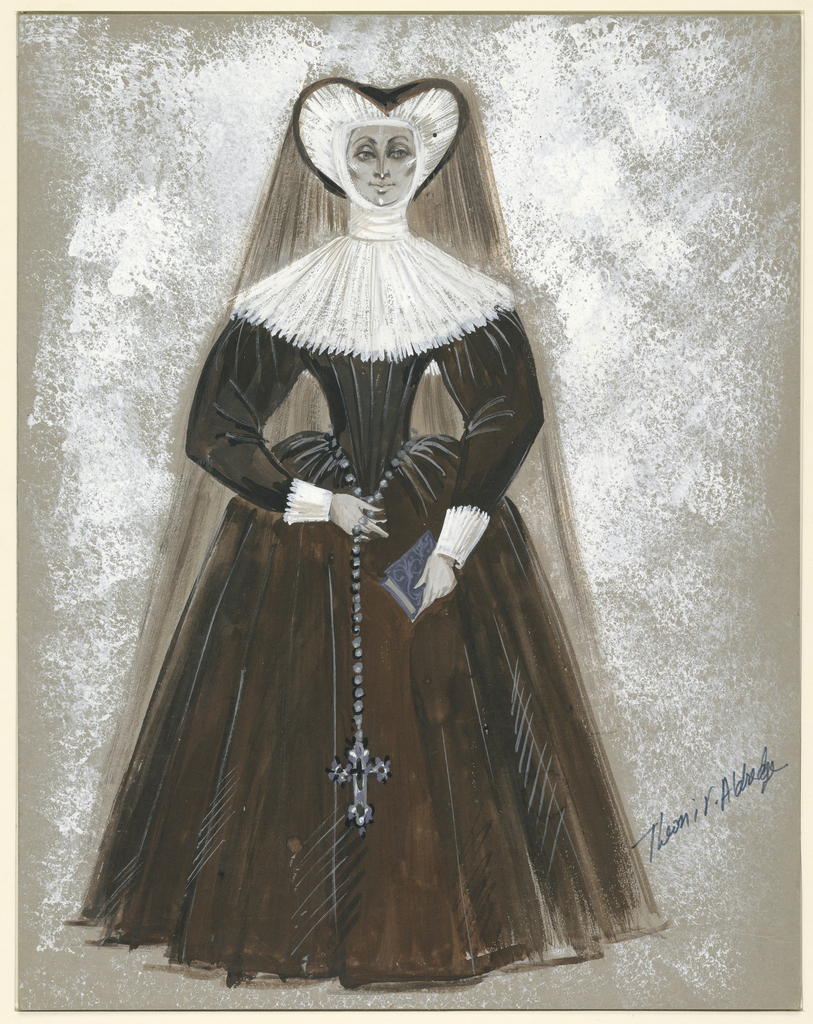 Theoni V. Aldredge designed costumes for the stage and screen with a career spanning six decades. At the height of her career, thousands of her fashions graced Broadway stages.[1]

Aldredge was driven. After graduating from the American School in Athens in 1949, she moved to the US to pursue a career in theater. She decided on costume design after seeing Vivian Leigh in Caesar and Cleopatra, and attended the Goodman Theater School in Chicago.[2] The first Broadway show she designed was I Can Get It For You Wholesale (1962). Her first Tony award was for Annie (1977), and she won her Oscar for The Great Gatsby (1973).

Aldredge rocked Shakespeare. In 1960, theatrical producer Joseph Papp hired Aldredge to design costumes for the New York Shakespeare Festival’s (now Shakespeare in the Park) production of Measure for Measure. She remained head of costume for more than twenty years, covering many of Shakespeare’s greatest hits, including the 1967 production of Comedy of Errors. It is from this production that Aldredge gave the designs for the abbess Aemilia and the courtesan to Cooper Hewitt, Smithsonian Design Museum. Aemilia and the courtesan provide essential testimony to the play’s chaotic plot of mistaken identity, for which distinctive costuming assists with characterization and amplification of the play’s overall humor. Aldredge’s “stylishly cut” garments were praised as helping cement “Shakespeare as a valid part of America’s theatrical heritage.”[3] Aldredge <3 the Public. Aldredge’s relationship with Papp and subsequent association with the Public Theater in New York provided a backbone for her extraordinary theatrical output. “Joe [Papp] and Michael [Bennett] brought me up properly in the theater,” she said in an interview. “Joe Papp taught me integrity. He let me stretch and grow and allowed me to make mistakes. Michael Bennett taught me about collaboration—about really knowing how to work within the theater. And, of course, both gave me the opportunity of working on A Chorus Line.”[4] Aldredge’s champagne-colored tuxedos and top hats for that landmark musical are arguably her most recognizable designs.

Aldredge had range. Regardless of the show, Aldredge was skilled at negotiating fashion and clothing for the theatrical space. A New York Times profile noted, “Mrs. Aldredge’s approach to costume design is predicated almost entirely on fulfilling and heightening the sense of the real.”[5] From glitz and glamour—Dreamgirls, A Chorus Line, 42nd Street, La Cage Aux Folles—to down and dirty—Annie and her fellow orphans, Hair and its oft-nude hippies—to period attire for the New York Shakespeare Festival, Aldredge embraced the dearth of costume history for her designs. “She likes nothing better . . . than to immerse herself in magazine clippings and the back rooms of museums in search of authenticity.”[6] Aldredge coupled this research with close observation of actors in rehearsal in order to make a wide range of characters come alive onstage.

Aldredge was sensible. Once asked of the difficulties of dressing modern performers in period garb, she replied: “Nothing is all that different, no matter what the time-frame of the production. There is an actor with two arms, two legs, and a head. You simply dress him.”[7]

Matthew J. Kennedy is the Publishing Associate at Cooper Hewitt, and additionally researches the histories of design and theater.

[3] Clive Barnes, “Theater: ‘As You Like It’: Papp Opens the Season at Delacorte in Park The Cast,” New York Times, June 29, 1973, ProQuest Historical Newspapers.