The First Lady of Scandinavian Design 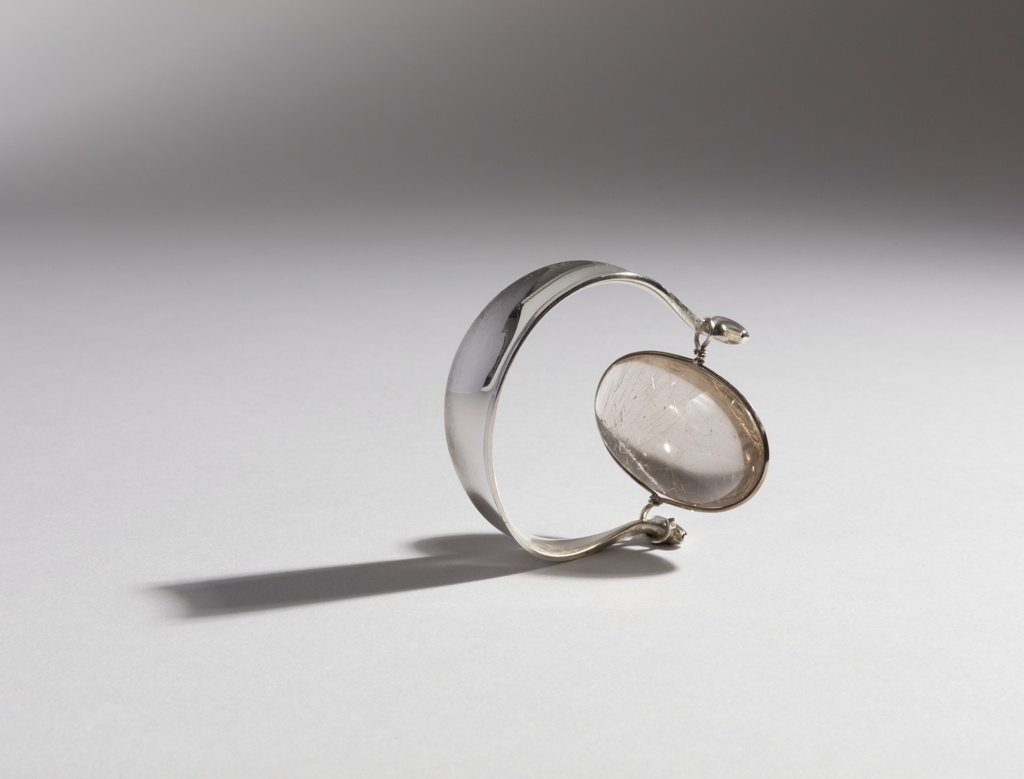 This cuff-like bracelet with large oval stone clasp was designed by Vivianna Torun Bülow-Hübe in 1968. It is made of silver and rutilated smoky quartz. The bracelet’s simple form is emblematic of Torun’s philosophy that jewelry should be functional enough to be worn every day, while one performs the routine tasks of the day, not designed to be stored and worn only on special occasions.

Vivianna Torun Bülow-Hübe, known as Torun, was one of Sweden’s most notable twentieth-century designers and silversmiths.  The designer, whose mother was a sculptor and father a town planner, graduated from the Academy of Industrial Arts in Stockholm before relocating to Paris. Torun was active in France, Sweden, Germany and Indonesia, designing jewelry, watches, and tableware. Her designs were impeccable, and her pieces were notable for their strikingly simple, clean, sometimes revolutionary design. For example, her “Dew Drop” series necklace featured a crystal drop that draped down the wearer’s back. Her now iconic bangle-style wristwatch became the first watch to be produced by Georg Jensen.

Torun Bülow-Hübe was born on December 4, 1927 in Malmo, Sweden. She was the youngest of four children who all pursued artistic careers—her brother and one sister became architects, and her other sister, a poet. Torun, however, is probably the best known of the siblings. Beginning in 1945, Torun studied at the Konstfack, the School of Arts, Crafts and Design, in Stockholm. In 1948, she spent the summer in Paris where she met Picasso, Braque, Matisse and other great artists of the day. She married her second husband, a French architect and lived in Stockholm. As early as 1952, Torun exhibited jewelry that she made in Stockholm and Paris.

In 1956, Torun and her husband divorced. She moved to France with her third husband, Walter Coleman, where she designed jewelry for Parisian glitterati like Billie Holiday who wore her jewelry when she performed. By 1958, Torun and her husband moved to Biot in the south of France. During this period, she produced many pieces, when young Swedish silversmiths would come to work in her studio, introducing her to new techniques. In 1961, Torun won the Lunning Prize, awarded for “pioneered a unique artistic contribution.” From 1968-78, she lived Germany and opened a workshop/studio, working with other artists in an association called “Die Schwinge.” In 1978, the peripatetic Torun moved to Indonesia.

In 1992, she returned to Sweden for a retrospective of her life’s work, and in that year, she won the Prince Eugen medal for outstanding artistic achievement. A master metalsmith, with a sharp understanding of form and function, Torun is considered one of the most accomplished designers and silversmiths of the twentieth and early twenty-first centuries.

← The Ability Project: Empowering People with Disabilities Through Design
Designers are Optimists: A Snapshot of Contemporary Design →