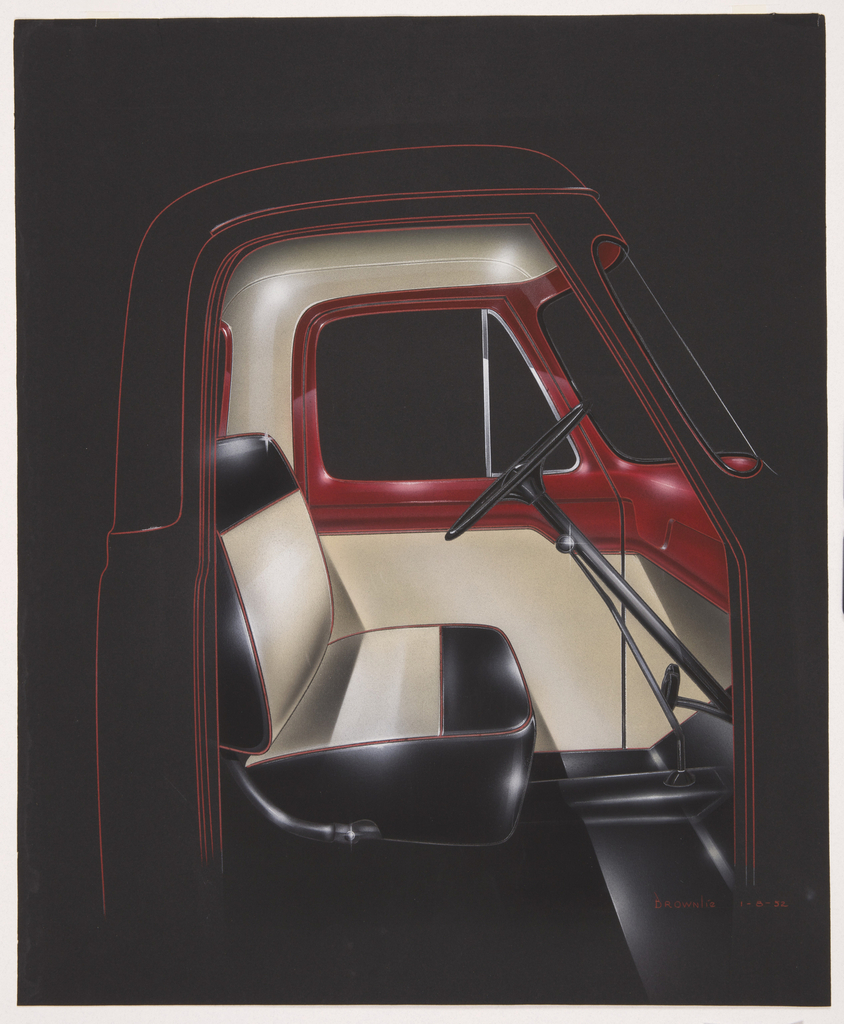 Bill Brownlie, a long-time designer and car stylist for Chrysler, drafted this interior concept for a truck cab in 1952. His sectional depiction of the interior is composed to provide viewers with a glimpse through the passenger’s side door.   The highly finished effect of the drawing, the result of using an airbrush and ink, gives the rendering a polished look-as if the design has already undergone significant development.  Indeed, styling departments were critical to car manufacturing in the mid-twentieth century and were carefully guarded as competition, particularly between the so-called “Big Three,” was fierce.  As Greg Beato has noted in The New York Times, “because aesthetics were considered the key to sales, these studios were insular realms.  Doors were kept locked, and artwork was not allowed to leave the building…while the car manufacturers retained some drawings, most of what survives today was smuggled out of the studios by the stylists themselves.”[1]

At the edges of this drawing, the black background gives way to the fine red outline of the cab and finally to a fully illustrated, polychromatic rendering of the interior.  It is as if close looking is rewarded with immersion into the shiny truck cab.  Details are sparse and yet Brownlie is precise with his lines; emphasizing the sections of smooth upholstery, bold color scheme, and careful proportions that dictate interior panels .

White bands of highlights and star-shaped details make the cab gleam in a fashion that goes beyond fresh paint and  smooth, unmarred seats.  The uncannily pristine interior elevates the vehicle and its unseen driver, who will eventually be engaged in labor, perhaps of a humble sort, to characters in an earnest narrative on the future of transportation, middle-class values, and post-war American prosperity.  Brownlie’s truck may gleam thanks to an airbrush, but soon, he suggests, this cab will gleam with hard work.

← To Cowslip Farm
Renaissance Style from a Renaissance Man: An architectural staircase model →