Renaissance Style from a Renaissance Man: An architectural staircase model 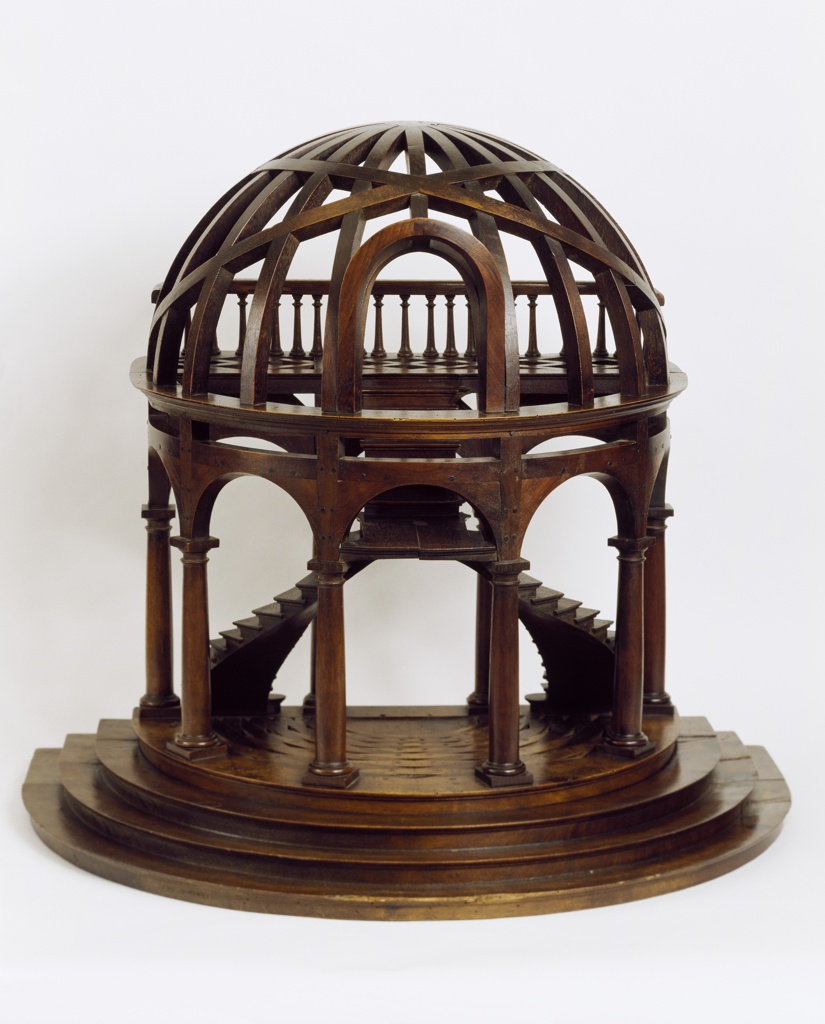 One of a group of staircase models, many of which are masterworks from a guild-like system of design instruction and apprenticeship called Compagnonnage, this model was part of a significant gift, the most significant outside of France, from Eugene V. and Clare E. Thaw. The donors, who both recently died, Clare in June, 2017, and Eugene in early 2018, also gave architectural models, interior watercolors, and Moustiers ceramics to Cooper Hewitt over the last twelve years. Their collection gifts, which we are celebrating with Object of the Day blogs, started with their staircase models collection at the time of Cooper Hewitt’s 2007 exhibition called Made to Scale: Masterpieces from the Eugene V. and Clare E. Thaw Collection of Staircase Models. Many of these models are now on view and celebrated in the Models and Prototypes Gallery on the second floor of the museum, alongside architectural models, all gifts of the Thaws. Nothing gave the Thaws more pleasure than seeing people of all ages and walks of life appreciating the models on view as well as saving them on their pens to learn more at home.

At first look, this model appears to be an architectural model of a Renaissance temple form but with a staircase. As you keep looking, you realize that its maker not only achieved the most skillful combination of proportion and structure, but that it is a tour de force of cabinetmaking skills in its execution.  Mastery of structural design of the roof is matched by the dovetailed and openwork patterning that matches its forms in the floor. The staircase curves in complete harmony with the curves of the structure, leading the small incarnation of the viewer to the upper level as part of the overall structure, and is self-supporting.

While the model appears to have been executed by an Italian architect of the sixteenth or seventeenth century, it is in fact, more likely based on Italian designs of the late Renaissance, but as studied by a successful French master, who had been taught Renaissance proportions, design drawing, skillful carpentry for roofwork, and cabinetmaking techniques. This program involved studying with many masters all over France, sometimes in Germany or Switzerland, to learn how to execute a work whose overall mastery transcended the study of any one of its parts.

Whoever made this model was a master; it is not an apprentice piece, or even an acceptance work into being a master. This model shows the confidence of mastership, and has been appreciated since it was made as such. The Thaws purchased it at auction of the Bill Blass collection, a point that Eugene Thaw was very proud of, in that it showed how designers in many media appreciated good design in other media than their own.  Eugene Thaw was a Renaissance man in his connoisseurship, so it is appropriate that he and we should appreciate the sophisticated form and execution of this masterwork of Renaissance inspiration.

This model is on view at Cooper Hewitt in Gallery 212, one of three galleries containing works donated by the Thaws. For more extensive reminiscences on the Thaws and their gift see: https://www.cooperhewitt.org/2018/01/12/eugene-v-thaw-an-appreciation/

Sarah D. Coffin is Curator and Head of the Product Design and Decorative Arts Department