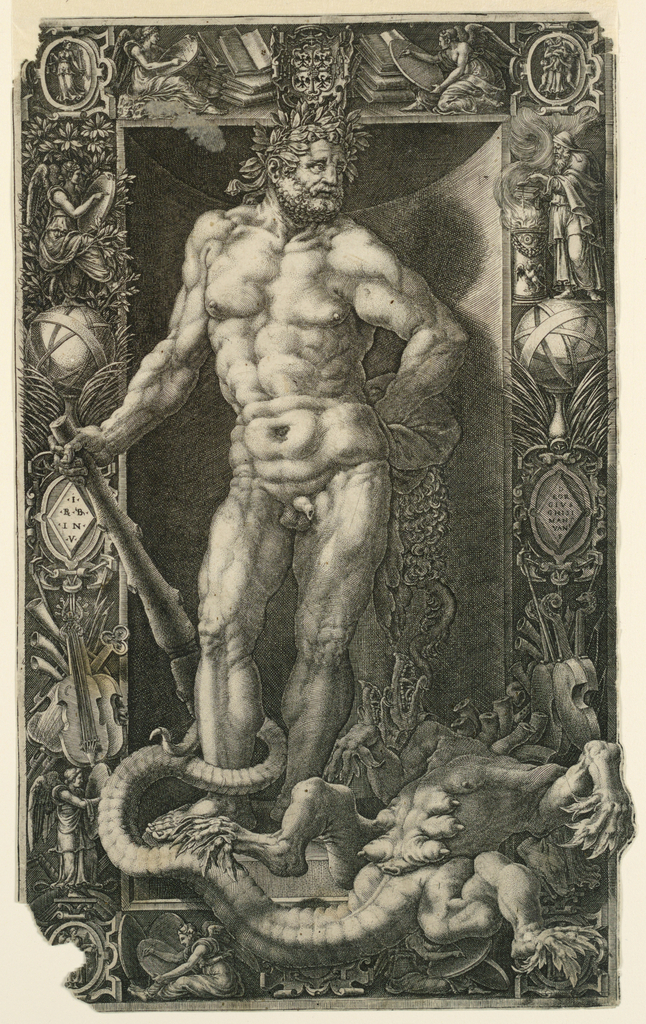 In this richly ornamented print from the Drawings, Prints, and Graphic Design department, Giorgio Ghisi (Italian, 1520-1582) portrays Hercules’ success in completing his second labor in his print Hercules Victorious Over the Hydra of Lerna. This print was designed for a frontispiece for artist Giovanni Battista Bertani’s commentary, titled Gli oscuri e difficili passi dell’opera ionica di Vitruvio, translated as The Dark Steps of the Ionian Work of Vitruvius. The book was dedicated to Cardinal Ercole Gonzaga and the print alludes to the Cardinal; “Ercole” is the Italian word for the Latin “Hercules.”[i] Another reference to the Cardinal is the Gonzaga family’s coat of arms in the middle upper border, above Hercules’ head.

Ghisi’s border is filled with many detailed figures and objects such as six, winged females writing on medallions, piles of books, and groups of musical instruments. Although densely ornamented, the border is categorized by symmetry as each figure or object is balanced on each side. A figure that stands out in this intricate border is the bearded male near the upper right hand corner, as he is not included in both sides. The bearded man is meant to highlight the allusion between Hercules and alchemists[ii] both labor to overcome challenges. Other interesting aspects of the border are the ovals present in each corner, which represent the four cardinal virtues: justice, fortitude, temperance, and prudence. Most recognizable is justice, which occupies the top left corner with a scale in one hand and a sword in the other.

Within the frame, Hercules is presented as a heavily sculpted nude male with a club in his right hand and a lion’s skin in his left. The lion’s skin is a reference to his first labor: defeating the Nemean lion. After killing his wife and child in a state of momentary insanity, he was sentenced to work for Eurytheus who tasked him with twelve labors to atone for his deeds. He is depicted standing triumphantly over the decapitated beast whose tail coils around the victor’s right leg. Ghisi includes this detail as a nod to the epic battle had between the two; the hydra tried to immobilize his assailant, but was defeated by the mighty swing of Hercules’ club.

← Shades of Gray
An Office Artifact →