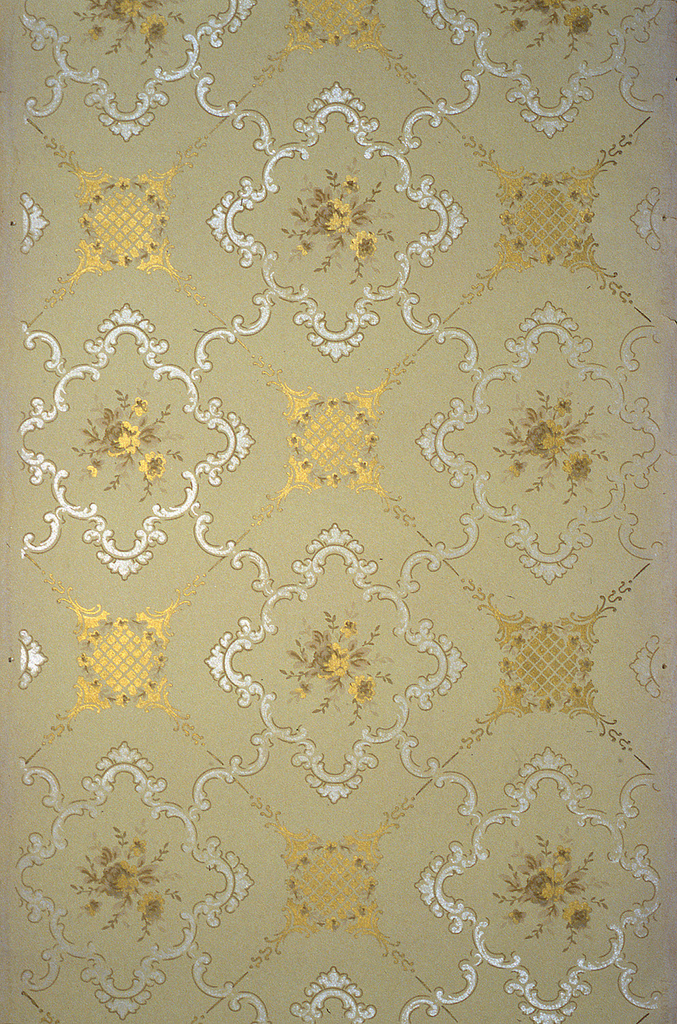 As the holidays draw near and decorations go up we begin to see the traditional hues of red and green, and their counterparts, silver and gold, appear around every corner. In accordance with this timing, it is appropriate to examine wallpapers that really exemplify this vein. Ceiling papers during the late nineteenth and early twentieth century with metallic colors such as gold, silver, bronze, and copper were extremely popular. Metallic gold, such as the kind utilized in this paper, was particularly popular in all price and quality ranges due to its reflective quality and shimmery effect. Consumers enjoyed the way metallic pigments brightened up a room without adding additional sources of light.

In regards to composition and decorative design, ceiling papers, such as this one, were often designed to coordinate with wallpapers and borders to create a more cohesive look within a room. This was done by using similar design elements and colors on all three of the papers, creating a somewhat continuous design scheme from the baseboard up across the ceiling. There were also numerous designs for independent ceiling papers printed with minimal decoration and light colors that would work with any wallpapers on the market. In general, it was stylistically tasteful for wallpaper to be darkest by the floor and lightest on the ceiling; creating an almost ombre effect. Although, Christopher Dresser, who was one of the primary figures in design reform and considered to be one of the first industrial designers, disagreed with the need for lighter ceilings and supported deep colors in all sections of the room. Ceiling papers came into use as early as the 1820s and remained fashionable into the 1950s.