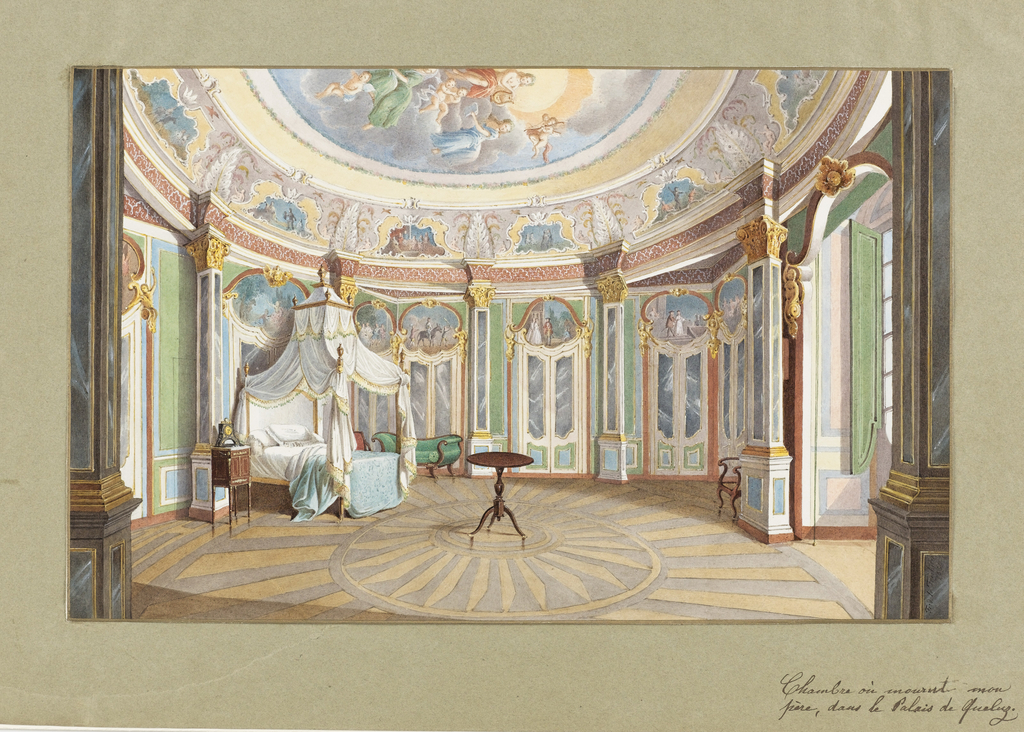 This polychrome interior hides architectural, visual, and historic secrets. The drawing depicts the bedroom of King Pedro IV in the Palace of Queluz in the municipality of Sintra, just west of Lisbon. The Palace was originally constructed in the eighteenth century under King Pedro III as a summer home. It remained within the Portuguese royal family until it was finally bequeathed by King Manuel II as a National Estate and henceforth became a state property. The palace is a rococo wonderland filled with multicolored marbles, well-placed mirrors, ornate gilding, and pastel stuccowork. Of the many ostentatious rooms, this bedroom remains one of the highlights of the once royal residence.

The room was designed by the architect Jean-Baptiste Robillion in the late eighteenth century and is a feat of architectural illusion: the square space is made to look circular through the insertion of well-placed piers with foliate capitals. These square columns uphold the cupola and cut off the corners to create a mirage of a round room. The large ceiling painting might be an allegory of music as we can discern Apollo with his lyre along the top edge of the drawing. This watercolor drawing remains remarkably faithful to present-day views, as seen in the image below. This bedroom is also called the Don Quixote room, a moniker deriving from the seventeen paintings embedded in the interior, which depict scenes from Cervantes’s El Ingenioso Hidalgo Don Quixote de la Mancha (1605-15). Cervantes’s novel became a towering literary masterpiece of Golden Age Spain. The pastel-hued cove and the oval overdoors immortalize the chivalrous deeds and misdeeds of the Spanish hidalgo. Unfortunately, present-day paintings within the room are no longer original but are instead restorations from 1940 by Fernando Mardel. The photo below offers a close look at some of these paintings. These scenes are easily identifiable—the painting on the top left depicts the moment when Maritones leaves Don Quixote hanging out of a window. The painting on the right shows Don Quixote with his companion Sancho Panza who rides on a donkey. Illustrations of Don Quixote’s adventures circulated through prints well after its initial publication date. An example of this is an engraving by François Joullain (1697–1778) after Charles-Antoine Coypel (1694–1752), the first painter to the king (premier peintre du roi ). The engraving depicts the same scene as the one illustrated above, capturing the moment when Maritones tricks Don Quixote by tying his hand to a window. Print, Don Quixote Bound to the Window by the Mischief of Maritornes, Engraved by François Joullain after Charles Coypel, 1724; Engraving; 330 x 314 mm, The Hispanic Society of America, Inv. no. LQ 1685

The Don Quixote room was at the center of royal and stately events. King Pedro IV of Portugal, who became the first Emperor of Brazil in 1822, was born in this very room in 1798. Pedro IV is remembered as an enlightened ruler, who sought to restore liberal ideals in Portugal and actively fight against Absolutist regimes. He lived through an immensely turbulent period in Portuguese history. The French invaded and ousted the Portuguese royal family in 1807, causing the court to flee to Brazil. While in Brazil, Pedro supported Brazil’s independence from Portugal and pronounced the nation’s independence on 7 September 1822. In 1832, Pedro returned to Portugal to take back the Portuguese crown after it had been usurped by his younger brother. Only two years later, he passed away in this room at the age of 39 due to tuberculosis.

This drawing in Cooper Hewitt’s collection presents a furtive glimpse into this historic room—the sheets on the bed are mussed as if the occupant of the room has just stepped out, and the foreground shadow amplifies this voyeuristic impression. The drawing additionally preserves the historic furnishings of the room, including the green chaise longue and the Louis XVI secrétaire topped with a clock. The magnificent radiating parquet is still intact in the room today. The palace of Queluz remains open to visitors and is a worthy day trip from Lisbon!

Cabelle Ahn was formerly an MA fellow in the Department of Drawings, Prints and Graphic Design at Cooper Hewitt, Smithsonian Design Museum. She is currently a Ph.D. candidate at Harvard University with a focus on eighteenth-century French drawings.

← How to Keep Your Cool
Natural Abstraction →

One thought on “Dreaming with Don Quixote”

Saw this Palace earlier this year. As the photo shows, the room is much darker than the sketch. Remarkable place to visit.

A useful date would be when Manuel II gave the Palace to the Portuguese government. The discussion toward the end of the article is full of dates, so this one at the beginning would be helpful.