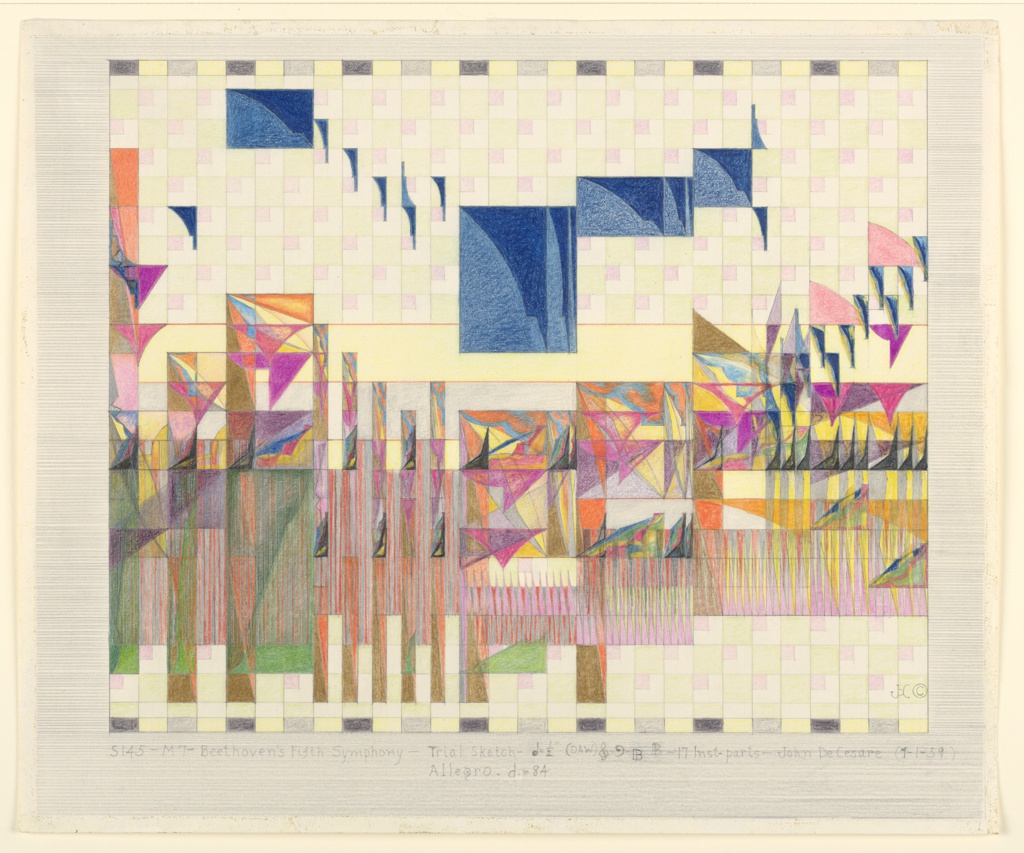 Many people try to play sheet music on the piano, but what about trying to play a drawing on the piano? The idea seems bizarre at first, but it’s central to a movement that began in the 1950s, where composers created “graphic scores” instead of typical sheet music. These graphic musical scores attempt to represent the music with visual symbols that are foreign to traditional Western notation. Above, we see John De Cesare’s graphic interpretation of Beethoven’s Fifth Symphony. The piece is striking and colorful, created with colored pencil and graphite on cream-colored paper.

John De Cesare was born in 1890, and he first worked as an architectural sculptor, providing adornment for some of the earliest Art Deco buildings in the United States. Many recognizable buildings in New York feature the work of John De Cesare and his firm, including the Empire State Building and The Verizon Building. In the mid-1940s, John De Cesare retired from architecture and shifted his attention to graphic notation, working mainly with colored pencils. De Cesare believed firmly that musical sounds could be recreated graphically, and he explained this in detail in his posthumously published essay “The Theory of Visual Space in Music.” The essay also gave insight into his drawing of Beethoven’s Fifth, which was completed in 1959 and acquired by Cooper Hewitt in 1982.

If you ask someone to sing the opening tune of Beethoven’s Fifth Symphony, they might not immediately know what you’re talking about. But anyone who hears the first four notes recognizes it instantly. The symphony begins with a distinctive four-note “short-short-short-long” motif. It’s often sung “dut-dut-dut-dah” in an ominous, brooding tone by people who might not even be able to identify it by name.  Since World War II, it’s been called “the Victory symphony,” following the popular phrase “V for Victory” and the fact that “V” is Roman numeral five, befitting Beethoven’s “Fifth” symphony. Interestingly, Morse code for the letter “V” is “dot-dot-dot-dash” or “short-short-short-long,” just like the opening motif of the symphony.

Viewers of De Cesare’s drawing may scour the painting for a visual corollary to the recognizable “short-short-short-long” motif, such as the one seen above. In “The Theory of Visual Space in Music,” however, De Cesare clarified that his drawing was actually created from the first seven pages of the symphony’s allegro movement. De Cesare called his drawing “an exploratory experiment to see whether it’s possible to show the arrangement of the instrumental parts of a full orchestra as when performed.” [1]

Although it might be difficult to look at the drawing and play Beethoven’s Fifth, De Cesare’s drawing is a testament to the overlap that exists between visual arts and musical arts. When one considers the dozens of graphic scores that De Cesare created, it’s hard to believe that he wasn’t a musician, and had no formal musical training!

← If the Shoe Fits
How to Keep Your Cool →