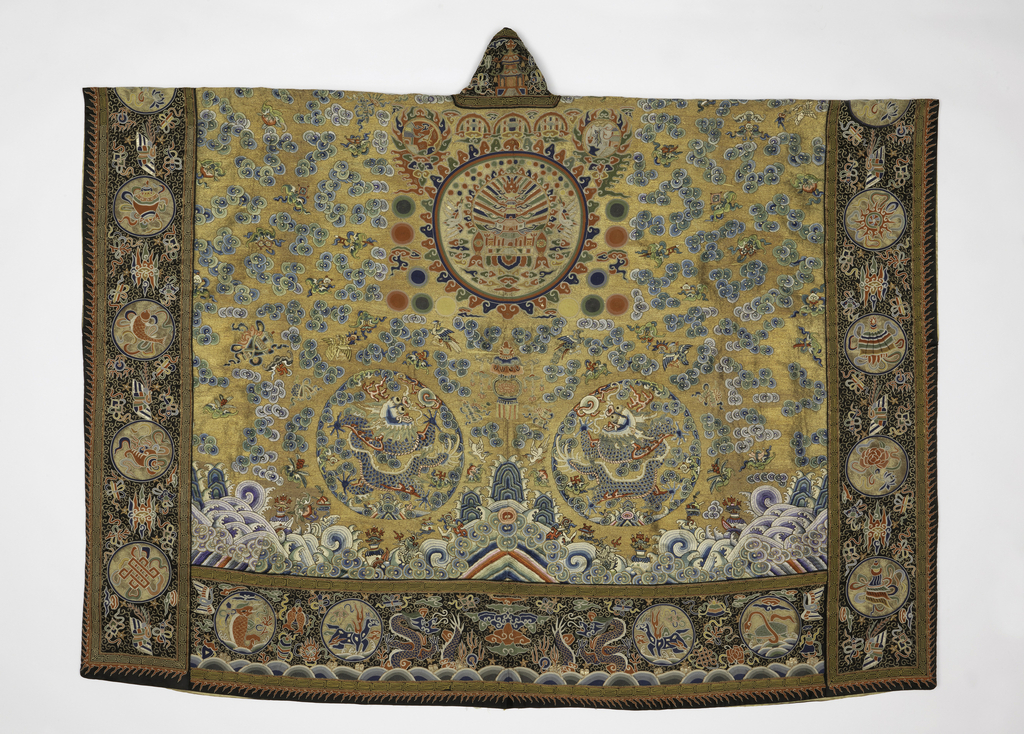 Posted by Rachel Silberstein on December 2, 2017

The visual complexity of the “robe of descent” (jiang yi絳衣) worn by the highest-ranking Daoist priests demonstrates how priests used symbols and words to control their environment. The complex symbols were believed to transform the wearer into a ritual participant who communicated between human and spirit worlds. The priest faced the altar to conduct rites, so the robe back typically contains the design’s focal point: Above a central pagoda surrounded by twenty-eight Lunar Mansions (the colored discs), are three small circles representing gates and on either side, roundels containing symbols for sun (represented as a three-legged pheasant) and moon (represented as a rabbit pounding a mortar). This robe features large roundels with five-clawed dragons chasing magic pearls: four on the front and two on the back, surrounded by bats, swastikas, and cranes. The robe’s bottom bands have dragons rising out of the sea, medallions containing carps, turtles, snake, qilins, and other auspicious symbols. Smaller roundels around the side borders contain the Eight Auspicious Buddhist symbols, and Taoist immortal symbols. The robe fastens with two yellow silk tabbed ribbons embroidered with Sanskrit writing. Religious garments often feature heavy use of metallic threads, here the ground is laid down with gold couched threads that set off the embroidered clouds and bats, and thicker gold strips are laid down around the borders.

← Designed for Comfort: The Allure of Resin “Gemstones”
A Walk on the Wild Side →