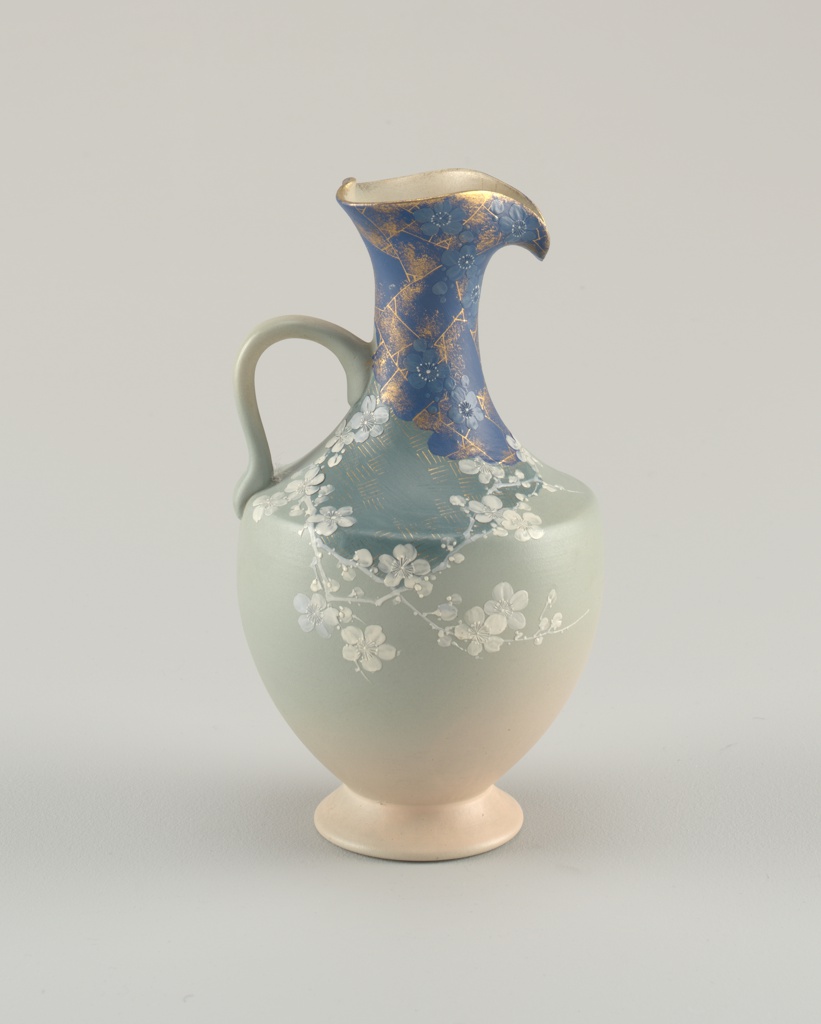 This pitcher was manufactured by Rookwood Pottery, an American art pottery company founded in Cincinnati, Ohio. Rookwood was begun by Maria Longworth Nichols in 1880 after she was enamored of the Japanese ceramics on view at the Centennial Exhibition in Philadelphia in 1876. Nichols originally proposed to her father that they bring a Japanese pottery—“workmen and all”—to Cincinnati, but instead she established her own pottery, in 1880, and began making Japanese-inspired work decorated with flowers, birds, bamboo, and insects.[1]

Although Nichols and other potters and designers working at Rookwood were producing ceramics in the Japanese style, Nichols sought to employ native Japanese artists at the pottery. In 1886, she met Kataro Shirayamadani and hired him to work at Rookwood beginning in 1887. This pitcher, then, is one of his earliest pieces made at Rookwood, where he continued to work until his death in 1948.

Currently on view in the exhibition Passion for the Exotic: Japonism, this pitcher’s Japanese-style decorations—on an American-made ceramic body—typify the American interest in arts from the east that was prevalent in the late 19th and early 20th centuries. In the mid-1880s, Japanese artisans toured the United States, plying their wares and demonstrating traditional Japanese crafts. Together with the Japanese installation at the Centennial Exhibition, these popular “Japanese Villages” served to spread interest in Japan and its arts throughout America. Thus it is no surprise that Rookwood and its Japanesque pottery became popular and successful, employing 200 people in the early 1920s.

The pitcher is decorated with soft, matte glazes of peach and pale celadon (green), atop which Shirayamandani has employed the pâte-sur-pâte technique of painting white paste (pâte), in this case in the form of cherry (or prunus) blossoms—a very typical Japanese-style motif. On the neck of the pitcher, he has painted two overglaze fields, in lighter and darker blue on which gilt-patterning was overlaid.

Nick Stagliano is a master’s degree candidate in the Cooper Hewitt/Parsons History of Design and Curatorial Studies program with a special interest in ceramics. He is a Curatorial Fellow in the Product Design and Decorative Arts Department at Cooper Hewitt.

← Preview Design Legends | Joris Laarman
A Gaze into the Park →