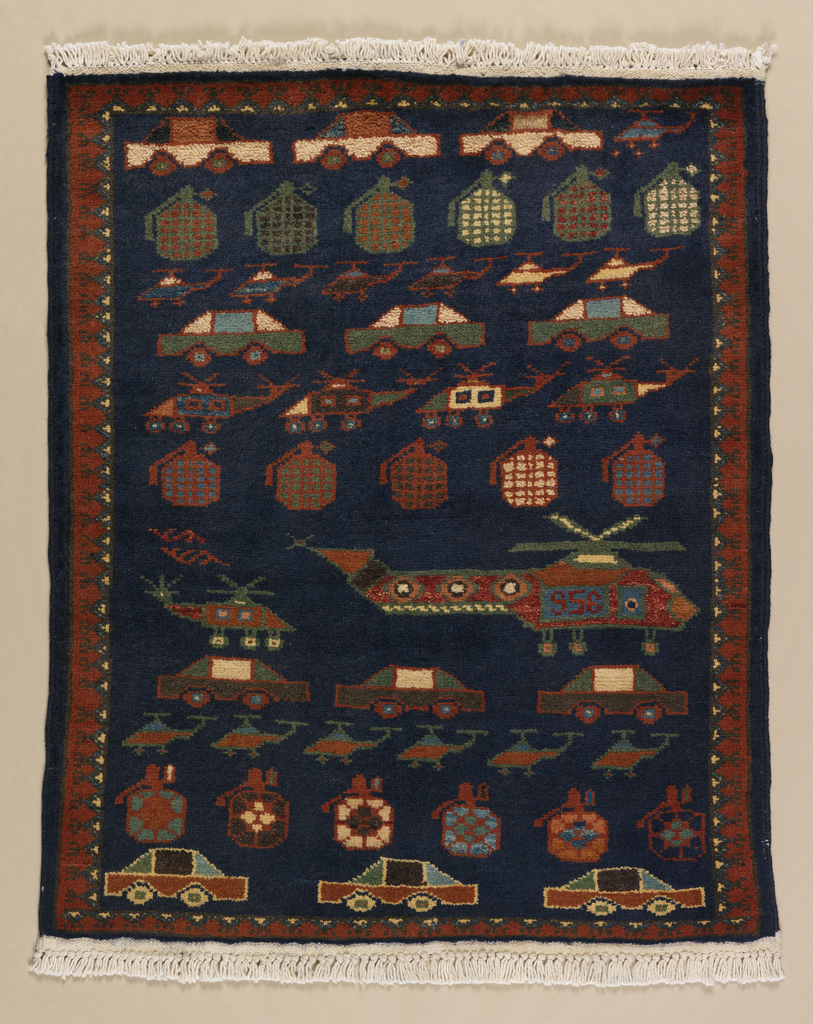 “A temporal Möbius strip that ties past and present.” That is how author and journalist Anna Badkhen describes each knot of a carpet in The World is a Carpet, her book based on a year spent with weavers in the village of Oqa, Afghanistan. Weavers today use the same technique and many of the same motifs as their mothers, and their mothers before that. They work on the same horizontal looms, squatting over frames that sit low to the ground. A high-quality carpet can contain over 200 of these tiny knots per inch—over a million knots in all—and take a year or more to weave. [1]

Afghanistan has been in a constant state of war for nearly 40 years. In 1979, the Soviet Union invaded, withdrawing a decade later but leaving the country with another decade of civil war, followed by US invasion in 2001. Where there is war, artists often grapple with and bear witness to the violence through their art, and there are many examples of women using textiles in this way. During the military dictatorship of Augusto Pinochet, for example, women in Chile documented the violence they experienced and the disappearances of their loved ones in stitched arpilleras, that were then sold abroad, raising awareness of human rights abuses. In the same vein, Hmong women in refugee camps embroidered “story cloths” that depicted the destruction of their villages during the Vietnam War.[2]

In Afghanistan, weavers began to include symbols of war in their carpets. Some of these rugs follow the form of traditional Turkmen carpets—a center field with decorative border—while swapping out the floral and geometric motifs for repeating patterns of weapons and vehicles. Others look more like propaganda posters: a unique image such as a map or planes flying into the World Trade Center, sometimes incorporating text. These “war rugs” are small and of comparatively low quality to traditional carpets (many fewer knots per inch, synthetic rather than plant-derived dyes), making them faster and cheaper to produce. This rug in the Cooper Hewitt collection is small (approximately 3’x2’). While it follows the traditional form of patterned center field and decorative border, both are relatively simplified. The repeating grenade, helicopter, and tank motifs appear to range in size from three to five inches.

There is a key difference, however, between the production of war rugs and other examples listed earlier. These rugs are not created as personal narratives to process trauma or to raise awareness of human rights abuses. In Afghanistan, the weavers—always women, usually in remote villages without electricity—do not design their rugs. Middlemen—always men, with access to capital and information—sell weavers the yarn to make the carpet and dictate the pattern they think will sell in the market. War rugs are designed for, and only purchased by, foreigners. During the Soviet occupation, military personnel bought rugs featuring Soviet weaponry: tanks, AK-47s, helicopters, and grenades. In the 1990s, after the military withdrew, rug purchasers were usually foreign aid workers. War rugs came to the attention of US audiences after the 2001 invasion of Afghanistan when US soldiers and other members of the foreign service purchased carpets featuring American weaponry and 9/11 imagery as souvenirs. [3]

Tali Weinberg is an artist whose work addresses climate change, gender violence, and other contemporary social justice issues. Her art is currently on view at Contemporary Craft in Pittsburg as part of the exhibition Shelter: Crafting a Safe Home. She has taught at California College of the Arts, Penland, the Textile Arts Center, and Headlands Center for the Arts. Tali is currently in Oklahoma as a Tulsa Artist Fellow researching hydrocarbon extraction and our embodied experiences of climate change.