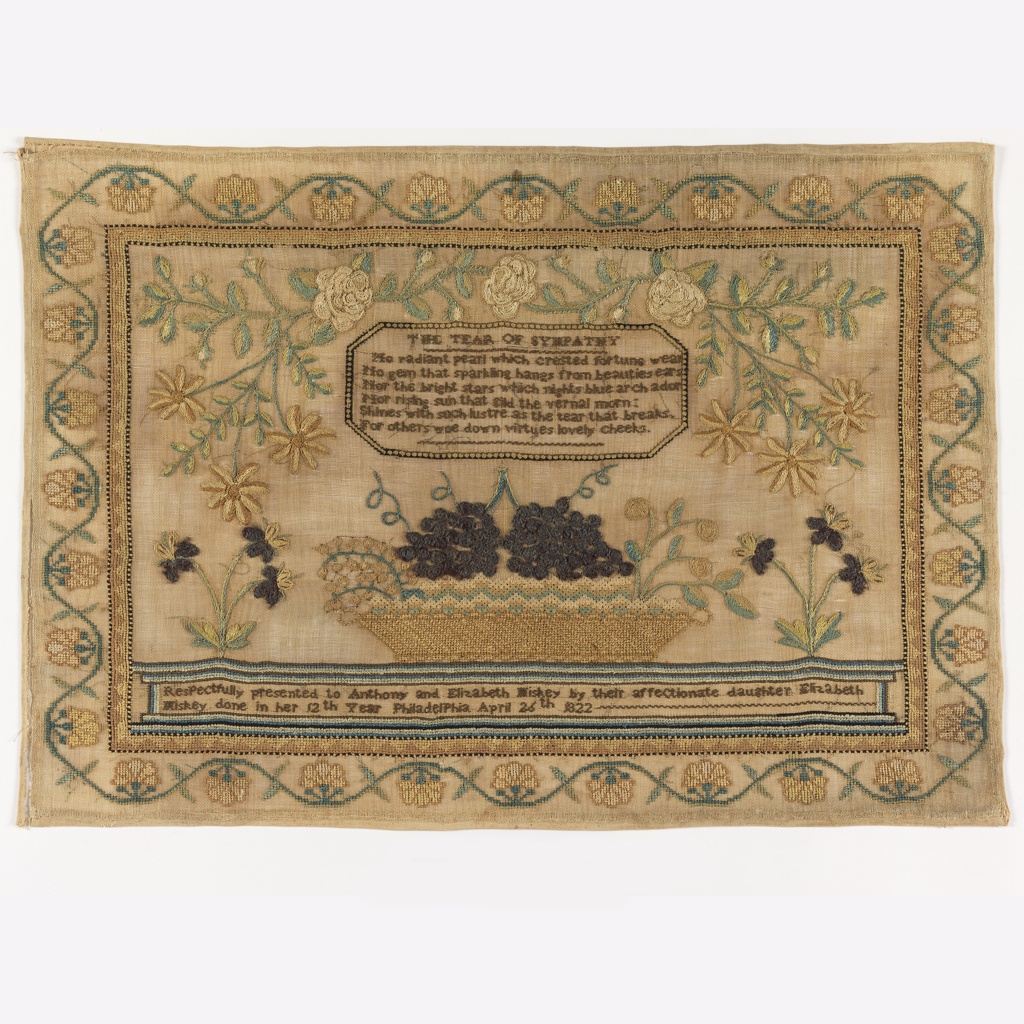 Unique to the Philadelphia area is a distinctive group of girlhood embroideries known as “presentation samplers,” distinguished by inscriptions similar to the one that appears on Elizabeth Miskey’s schoolgirl needlework: Respectfully presented to Anthony and Elizabeth Miskey by their affectionate daughter Elizabeth Miskey done in her 12th Year Philadelphia April 26th 1822. There are at least 15 known samplers with this same presentation signature and the format persisted for a remarkably long period of time – from 1816 to 1839. In addition, there are at least ten related samplers that were not “Respectfully presented to” the makers’ parents but include some or most of the presentation samplers’ other features.

Elizabeth Miskey was born in 1810 to Anthony Miskey (c. 1757-1839) and Elizabeth Smith (1780-1837). At the time Elizabeth stitched her sampler, the family lived at 382 North 2nd Street in the Northern Liberties District where Elizabeth’s father was a tailor and dry goods merchant. Anthony Miskey also owned the Green Tree Inn at the corner of Marlborough and Prince (now Girard) Streets in the nearby Kensington District, both districts situated north of Vine Street which at that time divided the city of Philadelphia proper from its outlying districts to the north.

Elizabeth’s sampler is representative of the presentation samplers stitched from 1816 to 1824, featuring a large basket of fruit and flowers sitting on or above a long rectangular platform under which the “affectionate daughter” recorded her dedication. The baskets feature rows of queen stitched strawberries and, starting in 1820, the baskets also included large bunches of grapes. Elizabeth stitched a verse above her basket, showcased within an elaborate octagon of embellished parallel lines, another distinctive feature of this group. Elizabeth’s verse, The Tear of Sympathy, is a modified version of a stanza from Erasmus Darwin’s (1731-1802) popular poem The Loves of Plants, published in his two-volume treatise The Botanic Garden in 1792. Above and around the verse are garlands and flowers, and the whole is surrounded by both an interior geometric and an exterior floral border.

The format of presentation samplers began to change in 1824, and the changes suggest more than one teacher may have been responsible for the longevity of this style. The sampler stitched by Elizabeth Sickfrits in 1824, for example, is one of two that abandoned the central basket in favor of a two-story brick house with fence and lawn, flanked by large trees. Both retain the same presentation signature, as well as multiple four-sided borders. Elizabeth Sickfrits, born in 1813, was the daughter of Sarah and Joseph Sickfrits, a shipwright living on Hanover Street (now Columbia Ave.) in Kensington near the docks on the Delaware River. In September of 1835, Elizabeth married William Wilson in the First Presbyterian Church of Kensington and they had several children.

The teacher or teachers responsible for this distinctive group of schoolgirl samplers are not yet known. Recent research on the sampler makers’ families, however, suggests she was teaching in the Kensington District (not Philadelphia proper) as all the girls lived in or close to that district. Supporting this conclusion is a related sampler that names Kensington School, a public school that opened on Marlborough Street in 1818. It is unlikely, however, that the school’s teachers were responsible for the highly accomplished presentation samplers. Of the 10 samplers that name a location, three name Philadelphia and seven name Kensington (for example, see the 1821 sampler by Catharine Rihl online in the Sampler Archive). Two of the three that name Philadelphia were stitched before Kensington was incorporated as an independent district in 1820. Research on this group of appealing and elaborately stitched samplers continues, in the hope of identifying the talented instructor who appealed to parents with the inscription “Respectfully presented to…”

Dr. Lynne Anderson is Director of the Sampler Archive Project at the University of Delaware, working with museums and historical societies across the country to create an online database of early American schoolgirl samplers and related girlhood embroideries. She is also co-founder of Sampler Consortium, an international organization promoting scholarship on historic girlhood embroidery.

Virginia Vis is a Research Assistant with the Sampler Archive Project at the University of Delaware; textile conservator with PastCrafts Textiles in Alexandria, VA; and textile conservator and researcher with the Daughters of the American Revolution Museum in Washington, DC.