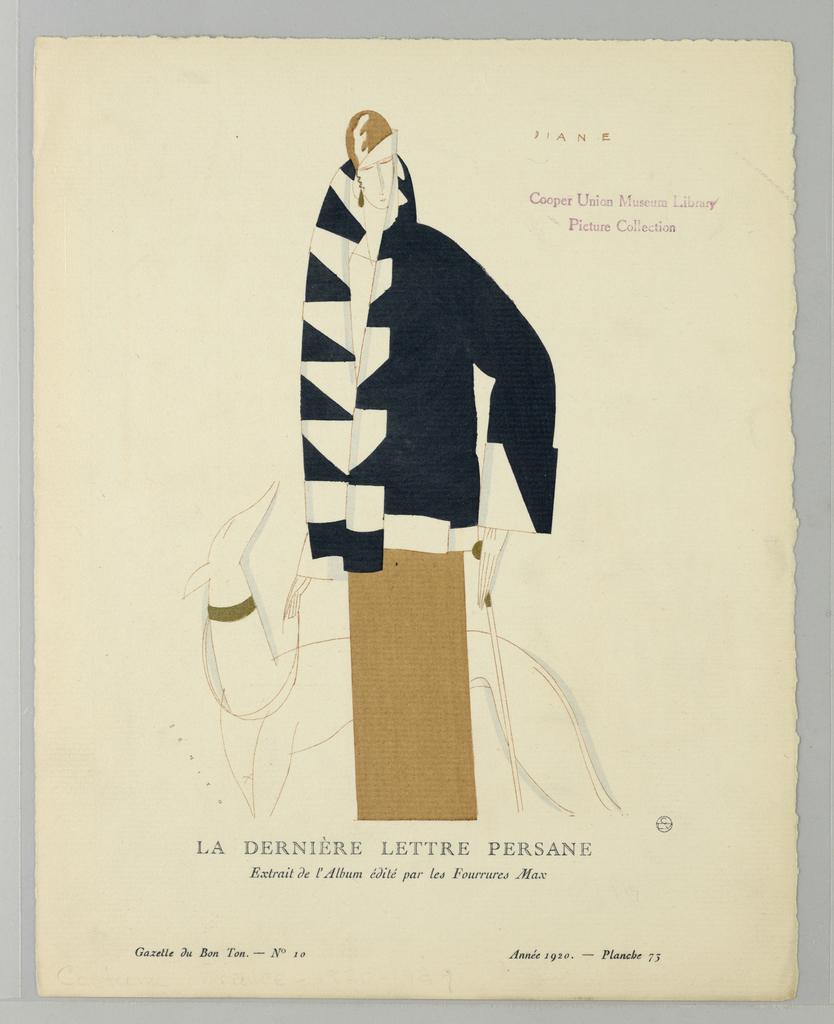 Posted by Danielle Weindling on August 10, 2017

“Now that fashion has become an art, a fashion gazette must also be an art revue. So it will be with Gazette du Bon Ton.”—Lucien Vogel, 1886–1954

Pictured alone against a bare backdrop, the young woman of this fashion illustration sports a cloche hat and a sleek black and white coat with a voluminous collar and wide sleeves. Standing tall, she commands control of her greyhound as well as attention from all those who pass her on the street. The long, clean lines of her columnar skirt represent not only the changing silhouette of the 1920s but also the shifting mores that give the Jazz Age its sensational repute.

Fashion illustrator Eduardo Garcia Benito created this print for La Dernière Lettre Persane (The Last Persian Letter), a folio of 12 fashion illustrations by the house of Fourrures Max, which was reproduced by art director Lucien Vogel in the popular French fashion magazine Gazette du Bon Ton in 1920. A graduate of L’École des Beaux-Arts in Paris, Benito illustrated for the Gazette from 1920–23 as well as for many other fashion periodicals throughout his young career.[1] Influenced by Cubism and Constructivism, Benito’s strong lines and attention to geometric forms were integral to establishing the Gazette’s Art Deco style and reputation for sleek sophistication.

Marketed to Parisian elites, Gazette du Bon Ton produced 70 issues from November 1912 to December 1925, with a short hiatus during World War I.[2] Available by subscription only, the Gazette cost readers 100 francs a year, a price accessible only to the city’s affluent haut monde. [3] Throughout the Gazette’s seven-year run, the journal’s strong connection to visual art typified fashion’s changing aesthetic—one that featured color, prioritized form, and pushed conventional boundaries of femininity.

The question of “good taste” plagues all who seek fame and fortune in the world of fashion and was responsible for art director Lucien Vogel’s editorial success. A soundboard for all “arts, fashion, and frivolities,” Vogel’s innovative work with the Gazette and other fashion magazines such as Vogue, Femina, Art et Décoration, Le Style Parisien, and L’Illustration des Modes helped elevate fashion to the status of art in 1920s popular culture.[5]  The son of esteemed illustrator Herman Vogel and the spouse of Cosette de Brunhoff—who herself came from a family of magazine publishers, editors, and illustrators—Vogel was surrounded by fashion’s most influential minds and was never short of inspiration for his publications.[6] Through frequent allusions to modernist literature, visual arts such as The Ballet Russes, and Erik Satie’s music-fashion hybrid Sports et Divestments, Vogel aimed to define fashion as the fourth of the Academy’s beaux-arts, traditionally limited to drawing, painting, and sculpture.[7] From the exclusivity of its designers and illustrators to the sheer cost of the magazine’s production materials, the Gazette set itself a tier above contemporary women’s fashion periodicals, uniquely defining good taste and elegance at this turning point in popular culture.

Two plates from Gazette du Bon Ton are included in The Jazz Age: American Style in the 1920s, on view through August 20, 2017.

Danielle Weindling is a Peter A. Krueger Intern in the Cross-Platform Publications Department at Cooper Hewitt, Smithsonian Design Museum.