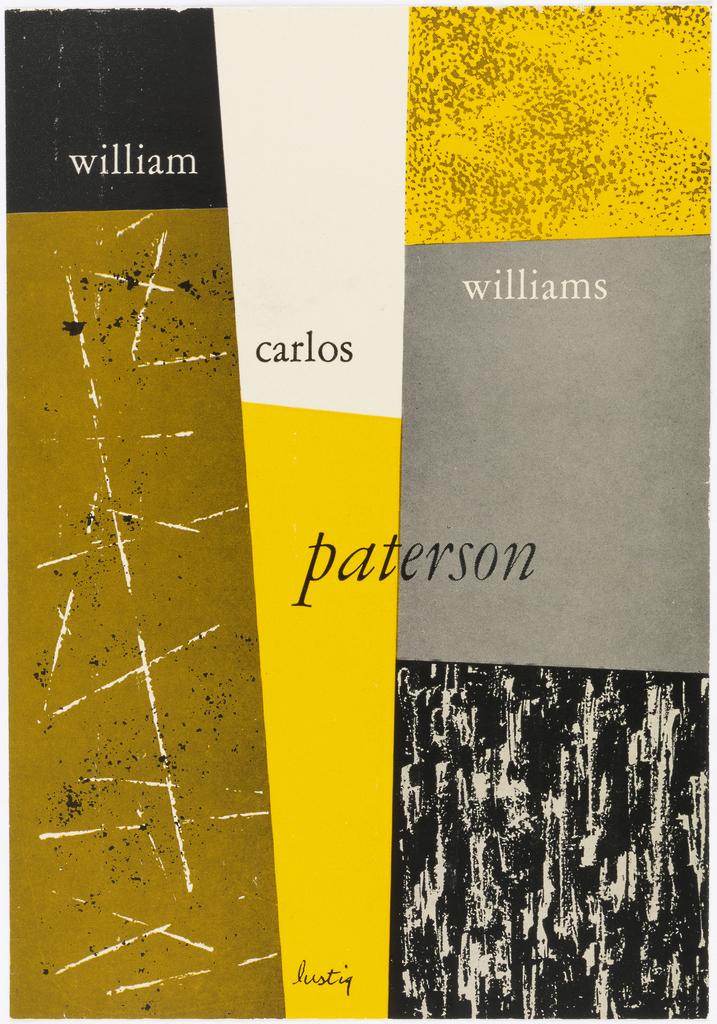 This 1948 jacket for William Carlos Williams’ book-length poem Paterson was designed by Alvin Lustig for New Directions Publishing’s New Classics series, a collection of reprints of modern literature. Lustig and Williams, a self-expressive graphic designer and a painterly writer, respectively, are a particularly complimentary pair, of the many authors whose work Lustig visually rendered.

The Puerto Rican–American poet is associated with modernism and imagism, with an interest in the canvas defining his style. In fact, Williams was a skilled painter himself, but poetry took precedence in the doctor’s leisure time. He creates scenes with deceptively simple or casual words, gracefully placed so as to make a clear portrait of an instant—within a summer morning, an American’s life, an era. The protagonist of Paterson is at once a man and a city. The work includes extradiegetic letters, historical documents, and geological surveys.

Lustig’s jacket design is a collage of its own. “His method was to read a text and get the feel of the author’s creative drive, then to restate it in his own graphic terms,” art critic Steven Heller wrote for Eye Magazine in 1993.[1] For Paterson, mustard yellow, yellow-green, black, gray, and white blocks are asymmetric and treated with different patterns. They provide a background for the humble serif text of title and author to rest upon. The shadow of an overlapped block is subtly discernible, evoking the cut-and-pasted paper works of Picasso and Braque. In calling attention to the medium and the picture plane, Lustig cites the modernist canon’s use of obvious flatness to create an infinite space, achieving multiple perspectives on a two-dimensional surface. It is in this same textured way that Williams describes universalities with a few words about the sound of the falls in Paterson, New Jersey.

Ezra Pound’s first tenet of imagist poetry is a direct treatment of the “thing.” Lustig’s cover sweeps away illusionism or implied representations of the fiction’s people or place, to give his subjective, abstract interpretation of the poem.

Greta Rainbow is the Peter A. Kreuger intern in the Department of Communications & Marketing  at Cooper Hewitt, Smithsonian Design Museum.