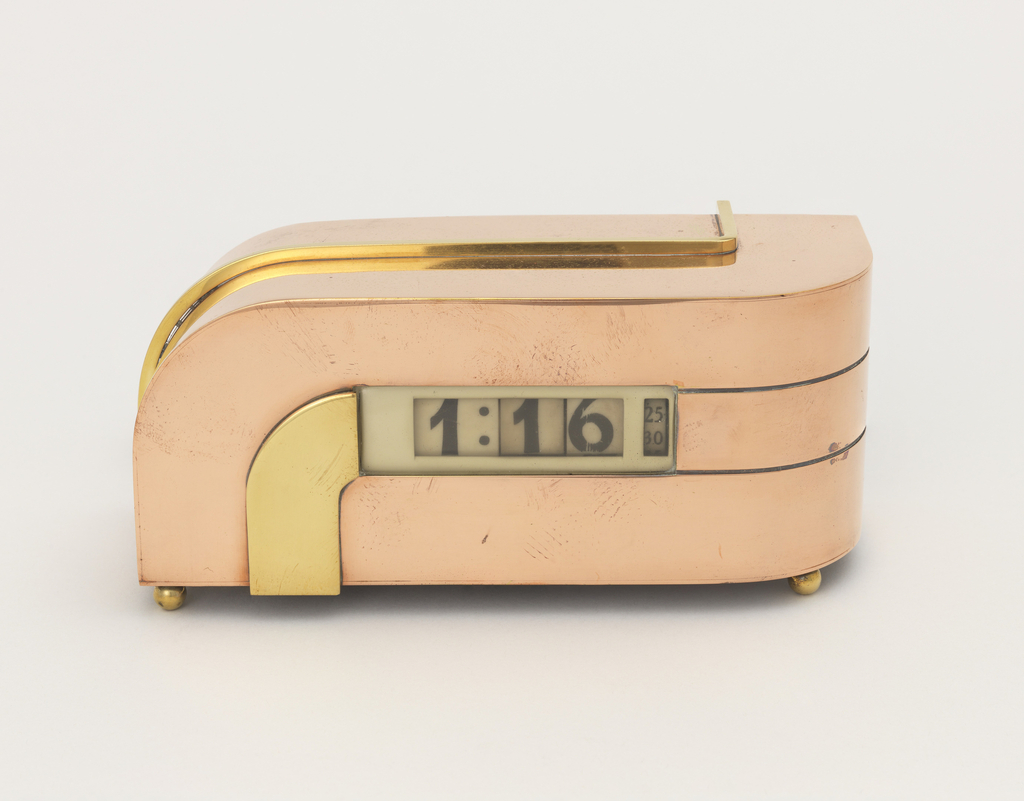 It is not very often that a clock’s origins provide as much mystery as that of the Zephyr clock. Designed during the mid-30s, it was originally attributed to Kem Weber, a German émigré designer who created several iconic designs of the Streamline Moderne style until evidence arose via a 1938 Lawson Time brochure that Weber had little to no involvement in the design. The catalogue accredited the design to previously unknown partners Adomatis & Ferher. The Adomatis in question has since been identified as artist George Adomatis, but the identity of the illusive Ferher has been more difficult to uncover. The best guess so far is that it is noted Art Deco designer and metalsmith, Paul Feher, but no official proof of this exists. It was due to clever timeline reconstructions during research at Yale University Art Gallery that this information was uncovered at all.

Until this became apparent, Kem Weber’s name has long been associated with the Zephyr clock. A German designer that came to America to supervise the construction of Germany’s exhibits at the 1915 Panama Pacific Exposition in San Francisco, Weber soon found himself stranded in California at the outbreak of World War I. Making his way south, he remained a prolific and tireless promoter of his work. Settling in Santa Barbara, he established an independent industrial design studio, and went on to design many products for a wide variety of companies. It was likely during this period that he submitted several design ideas to Lawson for consideration – but as the 1938 catalogue suggests, none were used in the final designs for their clocks.

Inspired by ocean liners, automobiles, skyscrapers, and other facets of modernity, the Streamline Moderne style regarding objects was brought to America and promulgated by Kem Weber, among other designers. This offspring of Art Deco architecture easily lent itself to decorative arts by emphasizing curving forms and long horizontal lines. As the Great Depression progressed, the stripping of the ornament of the Art Deco design appealed greatly to industrial designers, while manufacturers of clocks, radios, and other household appliances quickly followed. The style was a reflection of austere economic times, but also a reference to the concept of motion and speed developed from scientific thinking – streamlining into an exciting future filled with prosperity. The Zephyr clock’s sleek look and horizontal lines embraced the new modern digital clock face. The name, Zephyr, references the Greek god of the west wind. Known as the messenger of spring, the west wind is considered the gentlest of winds by Western cultures, making the Zephyr clock a point to a hopeful future during a time of struggle.

One thought on “Moderne Mystery”

Hello,
Your summary for this important piece of Streamline design remains incorrect. Kem Weber has no proven connection to any of the known Lawson clock designs (drawings for the five clocks that he presented to Lawson Clocks, Ltd are in the UCSB AD archive). So why is he discussed at length in this piece? And still noted on the “Tombstone” as a designer? The Zephyr, first called the ‘Mayfair,’ was being advertised in national publications by early 1937, so clearly the ca. 1938 date is incorrect as well. And finally, while I understand that attributing research findings to a major university lends credibility to your presentation, in this instance, I can assure you that Yale University had absolutely nothing to do with identifying Feher and Adomatis as the designers of Lawson clocks, likely including the Zephyr. That identification was the result of painstaking archival research by myself, working in tandem with Randy Juster of decopix.com I’d be more than happy to share my findings with CH should you care to discuss. Thanks, Dana Slawson, Los Angeles