Sketchbooks and the Power of Process 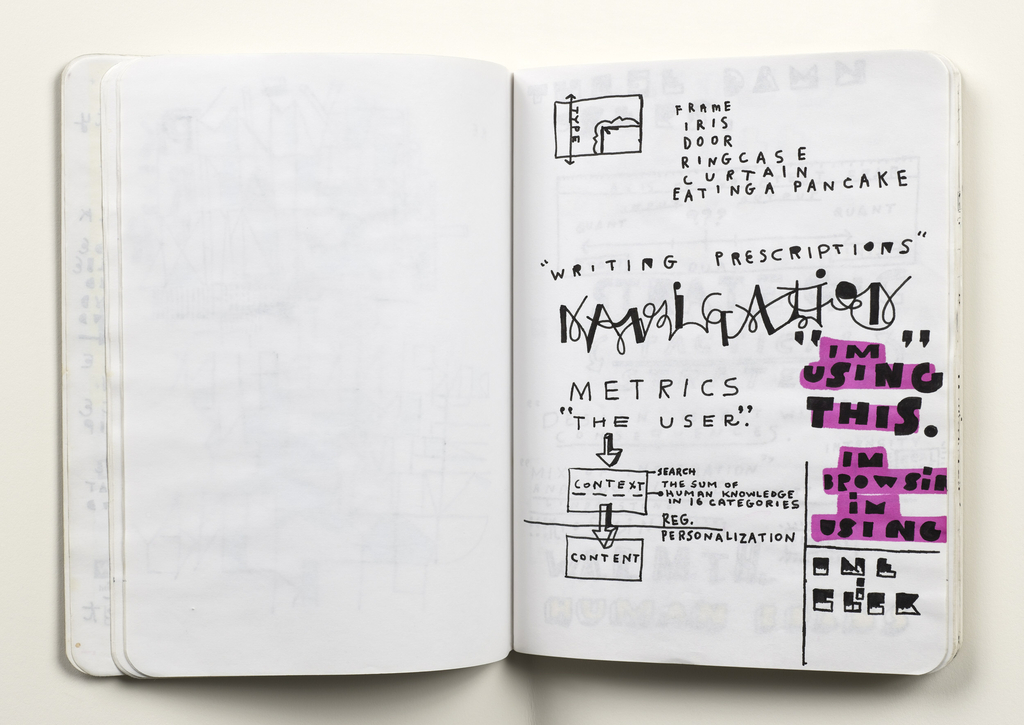 Designers of all varieties—architects, graphic designers, painters—are aware of the importance and utility of sketchbooks in the creative process. The blank canvas of a sketchbook page allows the design process to occur in real time and encourages documentation of ideas that might otherwise be fleeting. The significance of sketchbooks as part of the creative process can be seen in Cooper Hewitt’s collection: the museum has artists’ notebooks dating back to the 19th century.

This ink and mixed-media sketchbook is one of hundreds of sketchbooks by Peter Girardi from his time at creative firm Funny Garbage, the design and production studio he formerly co-directed alongside designer Chris Capuzzo. During Girardi’s time at the studio, Funny Garbage created digital content for companies including Cartoon Network, Nike, and I.D. Magazine. Though most of the studio’s work involves emerging technology, Girardi and Capuzzo each maintained a personal collection of paper sketchbooks to record process and ideas. These notebooks include everything from doodles and fabric scraps to ticket stubs and lettering prototypes.

The graffiti-influenced designs of Funny Garbage may seem extemporaneous, but this perception is actually the intended outcome of countless iterations and planning efforts executed in these sketchbooks. The end design may be the ultimate goal, but pages like these are a testament to the beauty of the creative process. As a design museum, we can choose to value this process in all its forms and celebrate the idea of the fragment as something poetic and complete within itself.

Julia Vennitti is Peter A. Kreuger intern in the Digital and Emerging Media Department at Cooper Hewitt, Smithsonian Design Museum.