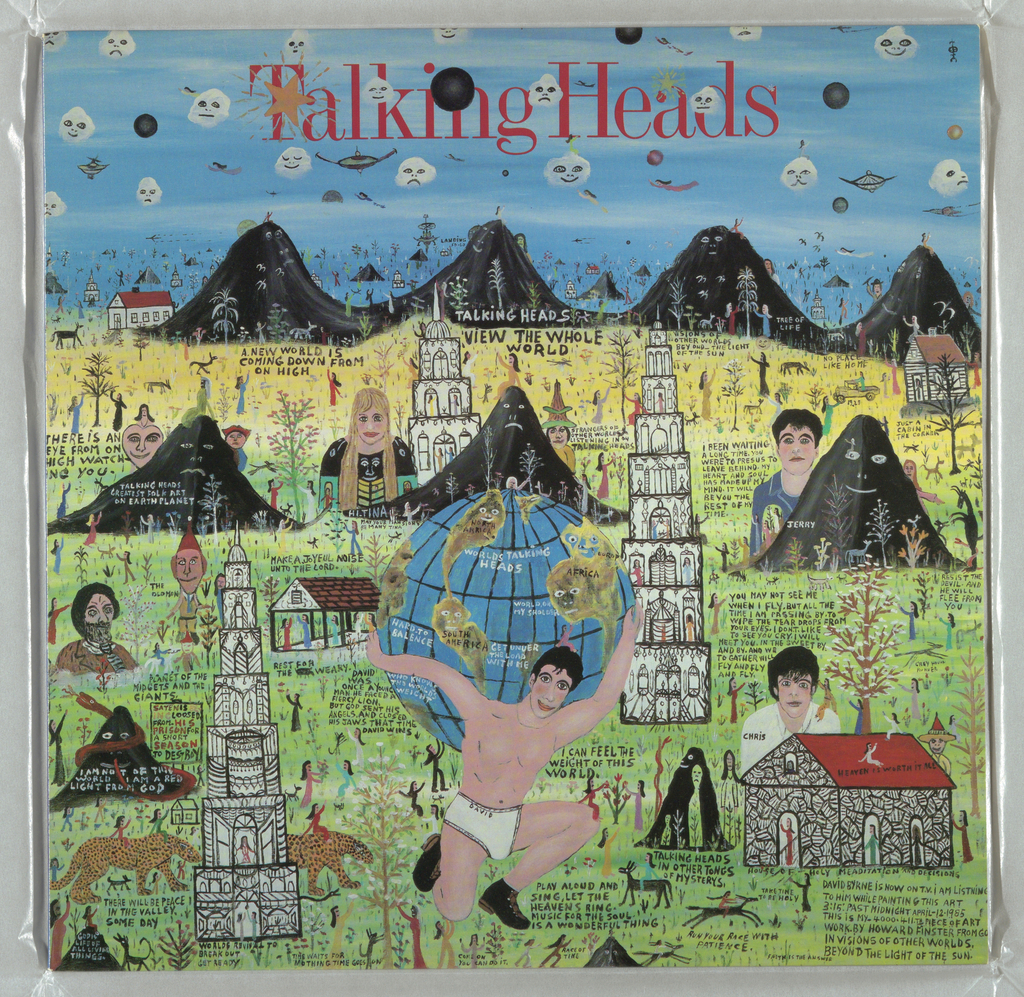 The Talking Heads are depicted alongside mountains, animals, and bell towers on the cover of their 1985 release Little Creatures. Lead singer David Byrne is Atlas, holding the globe, while the other band members are behind him. Graphic designer Tibor Kalman used a painting by Georgian folk artist Howard Finster as the basis of the album cover. Kalman designed several Talking Heads albums, but it was actually David Byrne’s idea to use the artwork of Howard Finster. Byrne explained that, “it was through the gallery that we contacted [Finster] and made suggestions regarding the format, size, and type of painting” [1]. After following Byrne’s suggestion to use a Finster painting, graphic designer Tibor Kalman added the red lettering of “Talking Heads” at the top of the painting, which is unique because the letters are cleverly interspersed within the original painting, with Finster’s clouds and stars sometimes above and sometimes beneath the text.

Born in Budapest in 1949, Tibor Kalman has come to be recognized for the typographical experimentation seen in his designs. Kalman’s ability to skillfully incorporate text into existing illustrations and photographs is carried throughout the design of Little Creatures. On the back cover photograph, the album’s credits are shown between the legs of the band members. In the liner notes of the album, Kalman inset details of the painting to accompany the album’s lyrics.

The front cover also features excerpts of the songs lyrics. The importance that Kalman placed on the album’s lyrics was revealed by Kalman’s friend and fellow designer Tom Kluepfel, who explained that “by the time we came to do the liner notes for the lyrics, David Byrne had not written them down… The image now comes to mind of Tibor—like some teenager with a new record–sitting in front of the stereo system, playing, writing, hitting rewind, playing again, jotting these lyrics down one by one and arguing over whether it was ‘oh baby’ or ‘ooooh baby.’” [2]

The decision to use work from Howard Finster was very much inspired by the music of the album. In the book Tibor Kalman: Perverse Optimist, Peter Hall and Michael Bierut explain that unlike other Talking Heads albums, Little Creatures “had a pared-down sound and a vaguely innocent air.” As a result, “Byrne came up with the idea of using the work—then largely unknown—of Reverend Howard Finster, the folk artist from Georgia.” [3] In the opening lines of the album’s title track “Creatures of Love,” David Byrne sings, “A woman made a man; a man he made a house,” which reads with the simplicity of a folktale.

Kalman’s ability to echo Byrne’s musical ideas in the album’s graphic design shows his talent as a designer. It’s not surprising then that in 1985 Rolling Stone magazine called Little Creatures “Album Cover of the Year.”

This post was written by Jeremy Witten, former Cooper Hewitt curatorial intern in the Department of Drawings, Prints and Graphic Design. He is currently studying music at the University of Alberta in Canada.