Hercules and the Teddy Bear 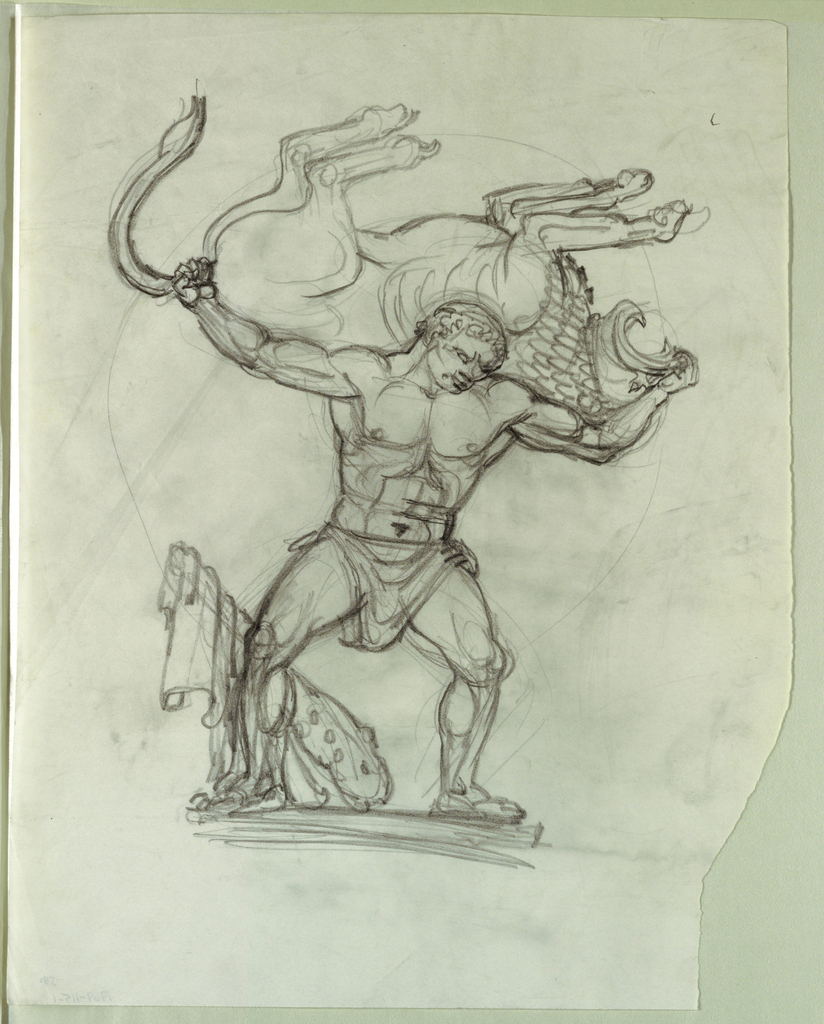 This post is relevant to the exhibition The Jazz Age: American Style in the 1920s.

Godly brawn characterizes the classical subject of this drawing: Hercules and the Nemean Lion.  According to Greek mythology, King Eurystheus tasked Hercules with vanquishing a lion that was terrorizing the region of Nemea.  He ultimately succeeded, killing the animal with his bare hands and thus completing the first of his twelve “labors,” feats designed to test his heroism.  In this graphite drawing, sculptor Paul Manship illustrates Hercules’ strength and courage, the dual qualities that enabled him to emerge victorious.

Manship’s Hercules possesses a wide, muscular stance and an impossibly broad chest that allows him to sling the slain beast along his shoulders, holding it ceremoniously by the base of the tail and its gaping maw.  The hero looks down in concentration, as if aware that more challenges lie ahead.

This striking study, probably destined to be executed in bronze, was intended to adorn one of two fountains within the Theodore Roosevelt Memorial.  Located on an island in the Potomac, the memorial consists of a wildlife preserve, a nod to the President’s ardent belief in conservation, and a plaza with seating, fountains (devoid of classical figures), and a statue of the President, arm raised with conviction, at three times life sized.  Designed by architect Eric Gugler and Manship, who was in the twilight of his life, the memorial opened to the public to mixed reviews in 1967.

Manship is best known for his other, earlier public sculptures, which adorn spaces as conspicuous as Rockefeller Center, where Prometheus crowns the great fountain, and much of his work is centered on classical subjects.   As his biographer Harry Rand has noted, “Manship’s perfect technique popularized the themes and the ornamental treatment of older civilizations.[i]”

The sculptor’s unique mastery of dynamic yet simplified forms, advanced techniques, and archaic subject matter was seminal in the perpetuation of Art Deco aesthetics.  His gilt bronze Actaeon is featured in Jazz Age: American Style in the 1920s.  Given Manship’s formal vocabulary, and the 26th president’s bold convictions, noble reformist goals, and proclivity for sport and adventure, the Labors of Hercules would surely have been a natural choice for Manship as sculptor and for Roosevelt as subject.  Alas, the Jazz Age had long gone and the prevailing aesthetics  in the United States had shifted indelibly.