A Groovy and Gear Paper 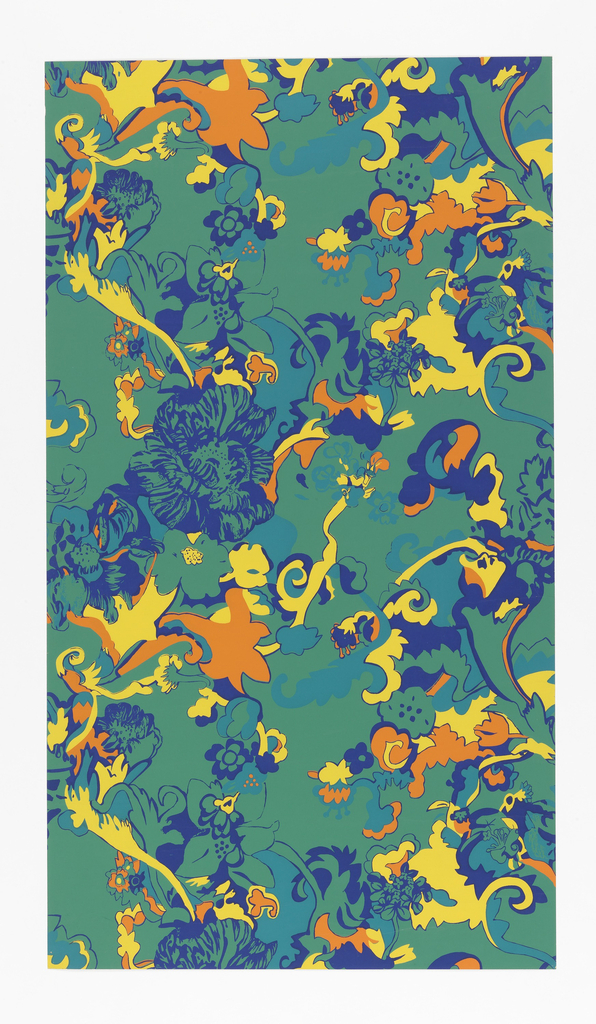 On this sidewall, strange enormous flowers drawn in blue are scattered on a green ground. Their tortuous curling stems are highlighted in bright orange and yellow. It is these bright highlights that catch our eyes first, so that our first thought is that what we are seeing is a purely abstract paper of swirling forms. This sidewall by Sanderson and Co. is an excellent example of the Art Nouveau revival that occurred in the late 60s. In Britain the resurrection of Art Nouveau in this decade was due to many factors. One was the two important Art Nouveau-related exhibitions held by the V&A in the decade, one in 1963 for the poster artist Alphonse Mucha, and one in 1966 for illustrator Aubrey Beardsley. The latter exhibition was especially important for the popularity of Art Nouveau stylings in the psychedelic art of the British counterculture. Art Nouveau was considered at the time an erotic, kitsch, anti-modernist, anti-academic, anti-mainstream style, and as a result, it was embraced both by the counterculture and by the youth culture of Swinging London embodied by the mods. Important works from the late 60s British Art Nouveau revival include the Beatles Revolver cover by Klaus Voorman, the ad for Alice Boots by Christodoulou, the interior of Barbara Hulanicki’s first Biba boutique, and the work of graphic designers Hapshash and the Coloured Coat, Michael McInnerney, and Marijke Koger and her Dutch collective The Fool.

British wallpaper firms capitalized on the popularity of Art Nouveau to reissue their holdings of late 19th-century wallpapers and to commission new designs inspired by Art Nouveau from contemporary designers. The 1964 “Inprint” exhibition at the Manchester Color Design and Style center featured an enormous amount of papers inspired by Victorian designs by CFA Voysey, Christopher Dresser, Lewis F. Day, and William Morris. Cole and Sons reissued papers designed by Charles Mackintosh, while Jeffrey and Company reissued their papers by Morris. Sanderson and Co. produced several lines of psychedelic papers, including their Palladio 8 line, which this paper came from, their Palladio 9 line, and their Tempo line, which they marketed specifically at young adults. This was a savvy move on their part, since it was youth culture that was driving consumption of Art Nouveau revival objects. Thus, this sidewall represents not only a time when Art Nouveau was having another great moment of popularity but also a time when youth culture was at a high point.

← Symbols of Faith
And the Winner Is… →